A streaming media device is streaming hardware that connects the television or the home theater to the Internet via Wi-Fi or Ethernet and allows the user to stream content from online services. These are basic devices with only a few connections, such as video (HDMI and/or composite), audio (RCA and/or digital), and Ethernet networking jacks. Many streaming media players also feature built-in Wi-Fi for wireless network connections, and most include their dedicated remote control. Roku Player, Google Chromecast, Amazon Firestick, and Apple TV are some of the most popular streaming media devices.

The rise in demand for digital video and audio streaming content services and rising Internet penetration are the factors driving the growth of the global streaming media device market. An increase in the number of smart devices capable of supporting digital media along with the availability of high-speed internet access has offered consumers to access the media content of their choice. The US as well as has been witnessing a tremendous increase in demand for digital media, wherein the majority of this digital media consumption was audio and video. The OTT services such as Netflix, Amazon Prime, and YouTube have been witnessing increasing demand among the youths across the globe which propels the demand for streaming media devices. Stringent regulations related to piracy and illegal streaming is expected to hamper the market growth. The market seeks opportunities from the growing demand for cloud-based services and solutions. Furthermore, increasing penetration of smart TVs is expected to challenge the market growth. 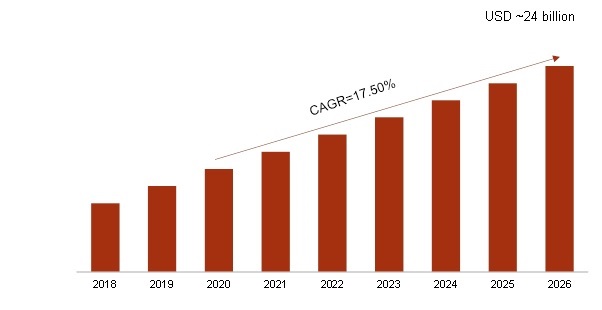 Global Streaming Media Device Market has been segmented on the basis of Device Type, Resolution, Application, End-Use, and Region.

By Application, the market has been bifurcated into gaming, audio/video entertainment, e-learning, and others.

By End-Use, the market has been segmented into commercial and residential.

By Region, the market has been segmented into North America, Europe, Asia-Pacific, Middle East & Africa, and South America.

Market Research Future (MRFR) study has covered the following countries in the regional analysis of the streaming media device market: the US, Canada, and Mexico in North America; Germany, the UK, France, and Italy, in Europe; China, Japan, India, and South Korea in Asia-Pacific. Saudi Arabia, UAE, and South Africa in the Middle East & Africa; and Brazil, Argentina, and Colombia in South America.

Asia-Pacific is projected to be the fastest-growing regional market during the forecast period. Growing demand for cloud-based solutions and services and rising Internet penetration in the region is expected to drive the market growth. Furthermore, high consumer income in the region and youths in the region increasingly demanding on-demand streaming services is further increasing the market demand in the region.

Europe is also expected to have a considerable share in the market. The region has been highly focusing on adopting the cloud strategies and streaming entertainment services which drive the market growth in the region. The market in Middle East & Africa and South America region is also witnessing a considerable growth rate owing to the rising demand for Internet-based entertainment services in the region.

What would be the streaming media device market valuation by 2026?

The streaming media device market valuation by 2026 would be USD 24 billion.

What CAGR would the streaming media device market record over the forecast period of 2020-2026?

What are the end user segments of the streaming media device market?

The end users mentioned in the streaming media device market are commercial and residential.

What are the applications included in the streaming media device market?

Applications mentioned in the streaming media device market are audio/video entertainment, e-learning, gaming, and others.

Streaming Media Device Market Is Projected To Register A 17.5% Cagr During The Forecast Period 20...