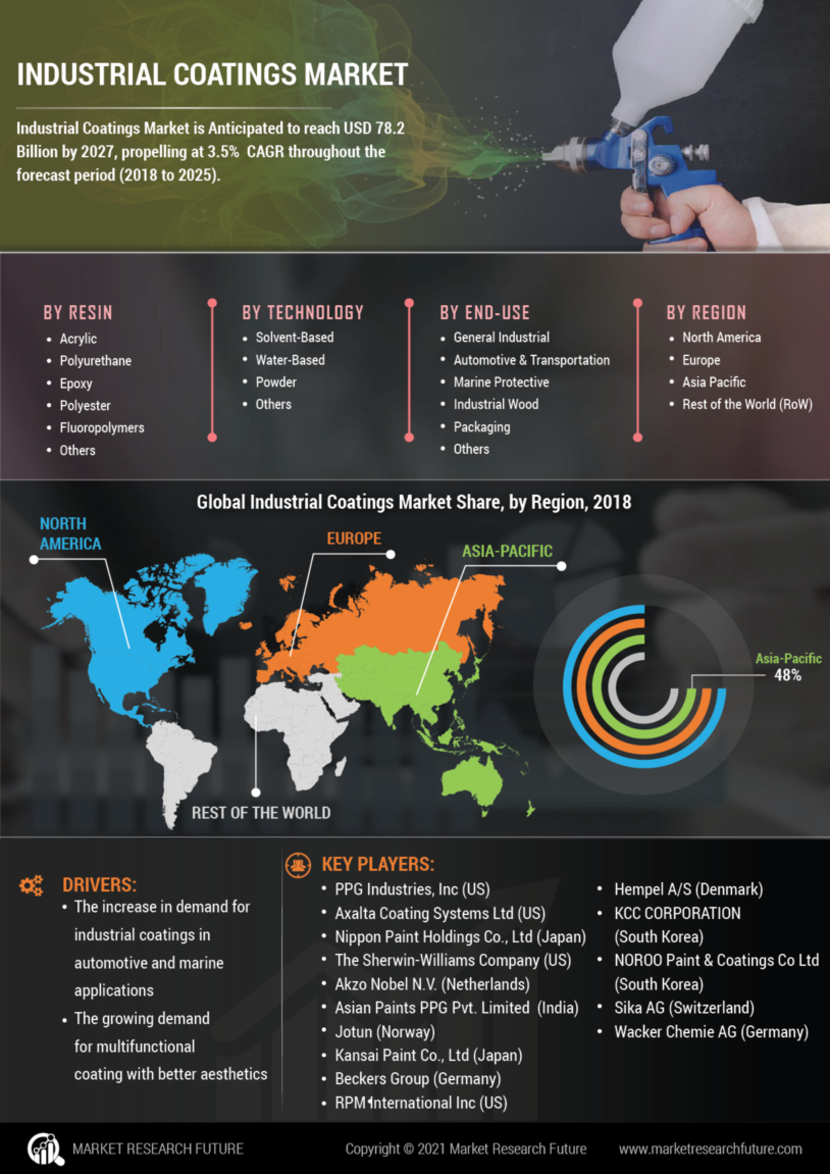 Industrial Coatings Market is projected to witness moderate growth at a CAGR of around 3.5% to reach USD 78.2 Billion by the end of 2027.

Some of the Key Strategies followed by the players operating in the global industrial coatings market are acquisition, product launch, and expansion.

With the increasing environmental concerns, several governments and end-users are increasingly using green and environment-friendly coatings. Consumers are more inclined towards eco-friendly coatings due to the rising focus on health, safety, and environmental regulations within the application areas of coating. Thus, the demand for environment-friendly products by the customers has prompted manufacturers to reduce the use of volatile organic compounds (VOCs) in coatings and opt for solvent-free coating products. Manufacturers are heavily investing in developing waterborne coatings, powder coatings, and UV curable coating technologies to meet the rising demand for sustainable coatings. For instance, in 2020, Axalta Coating Systems, a global supplier of liquid and powder coatings, announced the expansion of its production unit at its Jiading plant in Shanghai to increase the production of waterborne coatings. Industrial coating manufacturers worldwide are continuously looking for innovations that will push the industry towards a greener and sustainable future, which has led to the emergence of bio-based coatings. Bio-based coatings are formulated using feedstocks based on renewable materials. Thus, the increasing demand for environment-friendly coatings is expected to drive the growth of the industrial coatings market during the forecast period.

Furthermore, the growing adoption of nano-coatings and an increase in mergers and acquisitions by prominent manufacturers by the end users is likely to create growth opportunities for the market players during the forecast period. However, the difficulty in obtaining thin films is likely to hamper the growth of the global market during the forecast period.

Global Industrial Coatings Market has been segmented based on Resin, Technology, and End-Use.

Based on resin, the industrial coatings market has been divided into acrylic, polyurethane, epoxy, polyester, fluoropolymers, and others. The acrylic segment accounted for the largest share of 30% in 2019 due to its exceptional properties and high consumption in the end use industries. The high demand for acrylic coating is attributed to its low cost compared to its counterparts, along with its properties such as water resistance and stain protection.

Based on technology, the industrial coatings market has been divided into solvent-based, water-based, powder, and others. The water-based segment accounted for the largest share of nearly 50% in 2019, owing to an increase in demand for low-VOC coatings and environment-friendly coatings. Moreover, the high demand for acrylic coating can be attributed to its low cost compared to its counterparts and its properties, such as water resistance and stain protection.

By end use, the global industrial coatings market has been classified into general industrial, automotive & transportation, marine protective, industrial wood, packaging, and others. The general industrial segment dominated the global market with a share of over 35% by value in 2019 due to increased consumption of industrial coatings in the oil & gas and metal processing industries. The packaging segment is anticipated to be the fastest-growing segment during the forecast period owing to the increasing demand for packaged food and canned products. 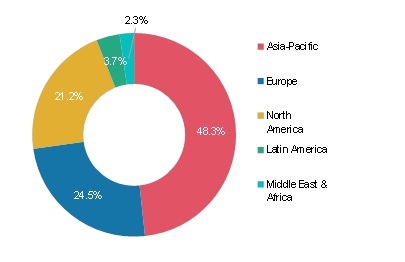 What is the valuation of the industrial coatings market?

The global industrial coatings market is expected to reach USD 119 billion by 2025.

What are the growth prospects of the global industrial coatings market?

The global industrial coatings market is expected to exhibit a solid 5.8% CAGR over the forecast period from 2019 to 2025.

What is the leading type of industrial coatings?

Waterborne industrial coatings are likely to dominate the market over the forecast period due to their lower environmental impact than solvent-borne coatings.

What is the leading regional market for industrial coatings?

Asia Pacific is the leading regional market for industrial coatings and is likely to exhibit stable growth over the forecast period.

What are the leading players in the industrial coatings market?

Increasing Demand For Environment Friendly Coatings Is Expected To Drive The Growth Of The Global...