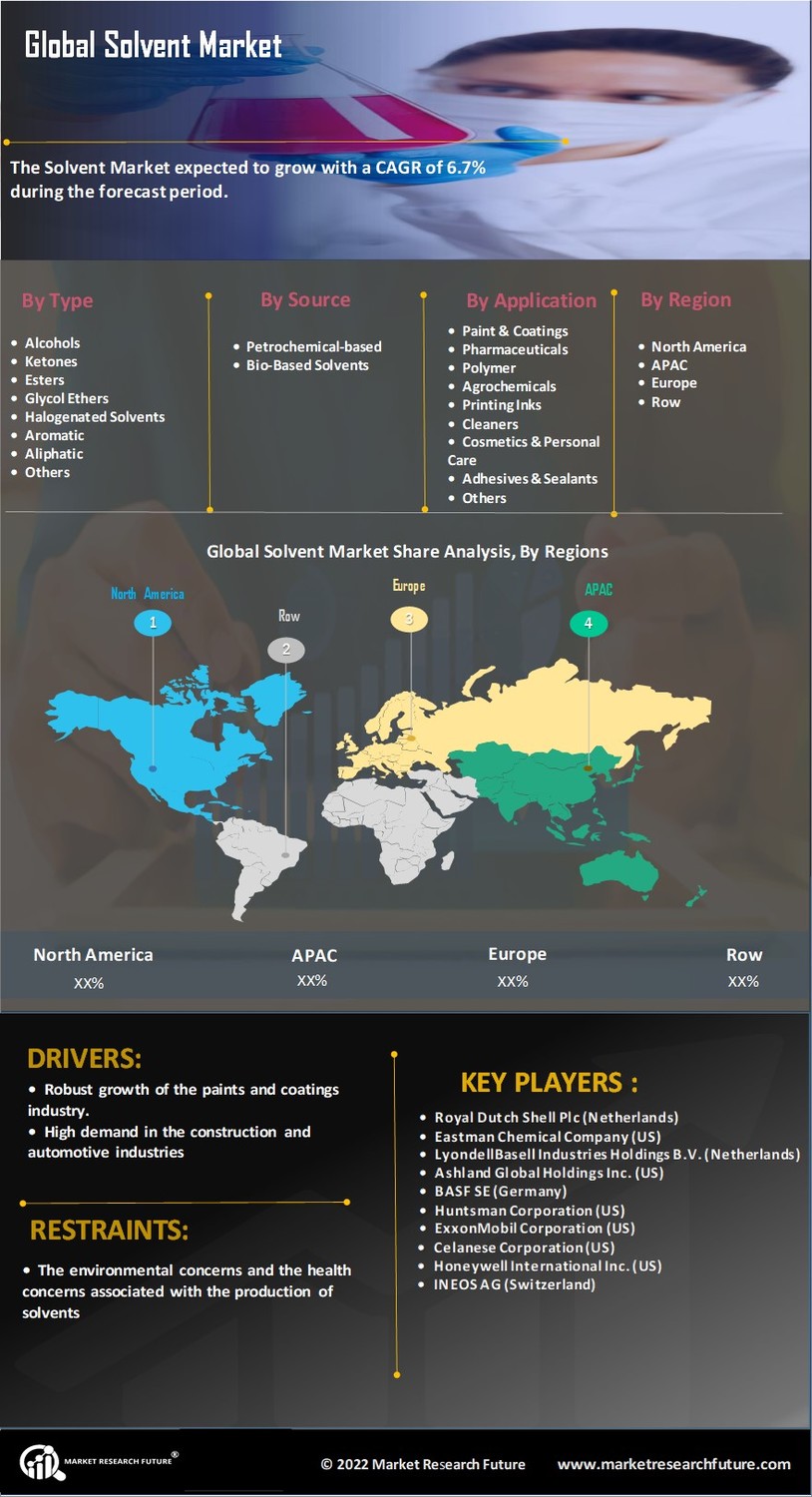 
The solvents come under the class of chemicals that dissolve and disperse other substances. The solvents are utilized for several end-user industries such as paints and coatings, pharmaceutical industry, aerospace, and aeronautical industries in their manufacturing, construction, and other industries. The solvents don’t change the chemical characteristic, yet they loosen the molecules and make it into a liquid form. The utilization of the solvents significantly affects the performance and meets the specific needs of the applications. Therefore the solvents industry is growing at a steady pace in recent years. The market value of the solvent industry was USD 21.9 billion in the year 2019 and it is expected to grow with a CAGR of 6.72% during the forecast period.


The COVID 19 widespread have affected the growth of several industrial verticals. The solvents industry was also affected severely due to the pandemic as there were issues such as maintaining the inventory levels were difficult as there was very scarce labor; disruption in the supply of the products and the demand were also reduced during the pandemic. The primary end-user industries such as automotive, construction, shipbuilding, aircraft manufacturing have reduced the demand and it had affected the overall growth of the solvents industry negatively.


However, the demand across the pharmaceutical industry and the cleaning agents were constantly supporting the growth of the solvents industry. Similarly, the growing trend of e-commerce had augmented the sales of the end-products.


The increasing industrialization and urbanization are presenting favorable conditions for the solvents market growth. Industrial cleaning and the cleaning of electronics are some of the crucial applications of the solvents industry. During the cleaning processing ensuring the safety of the personnel and the equipment are considered to be the key factor. Therefore such applications are considered as the major drivers of solvents market growth.


The manufacturers of the cleaning supplies of the electronics and other equipment are crucial and the solvents used must be studied carefully so that the equipment was not affected. The manufacturers are spreading awareness across the industry regarding the benefits and drawbacks of solvents. Such factors are also considered as the major drivers of solvents' market growth.


The advancement in the manufacturing technologies such as distillation separation, specialty production, boosting the output capacity is expected to boost the overall growth of the solvents industry during the forecast period. The demand applications in the pharmaceutical, electronics industry and significant others are also propelling the manufacturers to come up with novel manufacturing technologies. Therefore the solvents industry is expected to witness higher growth during the forecast period.


The leading market players are expanding their strength in both ways, that is both upstream and downstream. They carry out processes, obtaining the raw materials as per requirements and expanding the distribution channels as well. Therefore they are capable of generating higher revenue from the distribution channels. Such strategies and development from the leading market players are expected to boost the overall growth of the solvents industry during the forecast period.

For instance, BASF SE which is considered to be one of the prominent market players in the solvents industry has started to manufacture the solvents and started distributing the chemicals and intermediate solutions into the market.


The environmental concerns and the health concerns associated with the production of solvents are considered as the major market restraints of the solvent industry. The water-based solvents also possess certain unfavorable characteristics that include higher critical points and severe reaction conditions. Whereas the higher production costs associated with the organic solvents are also considered as the major restraining factors.


The limited production of the equipment required processing the solvents, reusability, and other issues associated with the processing of the solvents are also considered as the primary restraints of solvent market growth.


The toxicity of the solvents, the medical studies have revealed the toxicity rate of the organic solvents that can cause health issues on consuming, or inhaled more than a particular limit. They also cause skin irritation and lung infection on coming into close contact. Such factors are considered as the major challenges for solvent market growth. Therefore the developed countries are practicing regulations against the usage of solvents due to the environmental impacts created by them.


The solvents market value was at USD 21.9 billion in the year 2020 and it is expected to outgrow the market value of over USD $69.21 Billion by the year 2030 while registering a CAGR of 6.72% during the forecast period. This market value estimate is due to the intensive usage of solvents in several applications under several end-user industries. They are intensively used in-home care and personal care products as they involve creams and lotions; on the other hand, they are used for agricultural and chemical applications as well. Moreover, the demand for bio-based solvents is rapidly increasing over synthetic solvents. The developing countries are focusing on using products that are greener and don’t affect the environment during the production processes or the degradation process. Therefore bio-based solvents are preferred over synthetic ones in the countries like Europe.


The growing industries across developing countries like India and China are presenting favorable opportunities for the solvents market growth during the forecast period. As the solvents are intensively utilized as industrial cleaners, the growth across the industrial verticals is expected to boost the overall growth of the solvents industry. However, some countries are imposing stringent regulations on using the harsh chemicals involved in the production of hydrogen carbons that can cause serious effects to the environment, instead these countries are encouraging water-based substitutes that are more effective than hydrocarbons solvents themselves.


On the other hand, the stringent environmental regulations imposed across the European countries regarding the usage and manufacturing of synthetic solvents have restricted the growth of the solvents industry. For instance, Europe has been regulating the usage of solvents that can potentially cause damage to the ozone layer. Carbon tetrachloride and methyl chloride are regulated under the Montreal protocol of 1987 which was implemented across European countries. Similarly, the EU’s solvents emission directive had reduced the sales of perchloroethylene across the country.


However, the increasing demand for printing inks, paints, coatings, adhesives, and significant others have been bolstering the overall growth of the solvents industry in recent years.

Based on the product:


The Asia-pacific region is expected to hold higher market growth in the solvents industry, as it is considered the largest producer of hydrocarbon solvents in terms of volume. Moreover, there are several paints and coatings industries across the region which perceive higher demand for hydrocarbon solvents. Especially some countries like India and China are inclined towards developing their infrastructure and are constantly investing in the construction industry, this attributes to the growth of solvents industry in the recent years. Similarly, the growth in the agricultural sector, personal care, and cosmetics across the region combined with the growing urbanization and changing attitude in the lifestyle of the potential consumers are also driving the solvents industry across the region.


In the year 2020, one of the leading market players had introduced a series of renewable, pure, and biodegradable isoparaffins into the UK market. This product is a bio-based hydrocarbon solvent that is considered to be safer, sustainable, and environmentally friendly than the conventional solvents that are derived from fossil fuels. These Bio Life solvents are utilized in lubricants, hydraulic and metalworking fluids, lubricants, coatings, and significant others.


In the year 2018, one of the leading market players, Royal Dutch Sheel PLC had initiated the operation of ethylene crackers in China. This expansion had helped the company in manufacturing ethylene oxide, ethylene glycol, propylene oxide, polyols, and polyolefins.

Based on the product:

What is the market size of the solvents industry?

The solvents market value was at USD 21.9 billion in the year 2020 and it is expected to outgrow the market value of over USD 69.21 Billion by the year 2030 while registering a CAGR of 6.72% during the forecast period.

Who are the major market players in the Solvent industry?

What are the major end-user applications of the Solvent industry?

What are the three main categories of solvents?

What are the major benefits of aromatic solvents?

How solvents industry is bifurcated based on types?