Global Distributed Generation Market is expected to grow at USD 126.2 Billion, at a CAGR of 10.14% during the forecast period

During the forecast period, the global distributed generation market is expected to grow at a rapid pace, owing to the rising demand for clean energy generation and renewable energy sources. Governments all around the world have devised enticing incentives to encourage the adoption of renewable energy sources, hence accelerating growth. The market is growing as people become more aware of clean energy resources. The industry is being driven by the rising demand for a distributed generation due to environmental benefits and the lower cost compared to traditional energy generation.

One or more power stations are situated close to the load in decentralized generating, which is a decentralized and relatively flexible technology. Each power station has a capacity of around 10 megawatts, and these systems can include numerous generation and storage locations. Distributed generation is made up of a variety of energy sources, most of which are renewable. Solar, wind, fuel cells, hydro, biogas, biomass, and geothermal power are all examples of renewable energy sources. Decentralized generating can assist in delivering reliable and clean energy to users while decreasing transmission losses. The centralized system currently dominates the global electricity distribution system. However, it is expected that there would be significant growth, owing primarily to developed economies.

The global distributed generation market is projected to grow at a high rate during the forecast period, mainly due to the growing demand for clean energy generation and renewable sources of energy. Governments around the world have developed attractive incentives, rewarding the use of renewable sources of energy, which further drives the growth. Global market has been segmented based on technology, application, end- use, and region. Based on technology, the market is classified into geothermal, solar, wind, biogas, fuel cells, and others. Solar segment is leading the market and has the largest market share, mainly due to the less cost involved in setting up the system for both, commercial and residential use. Based on application, the market is segmented as off-grid and on- grid. On-grid segment dominates the market in this sector as on-grid systems are very cost effective and simple systems. The global market of distributed generation is further segmented based on end-use, including residential, industrial, and commercial segments. Commercial segment of the global Distributed Generation Market is estimated to register the highest growth rate during the forecast period. 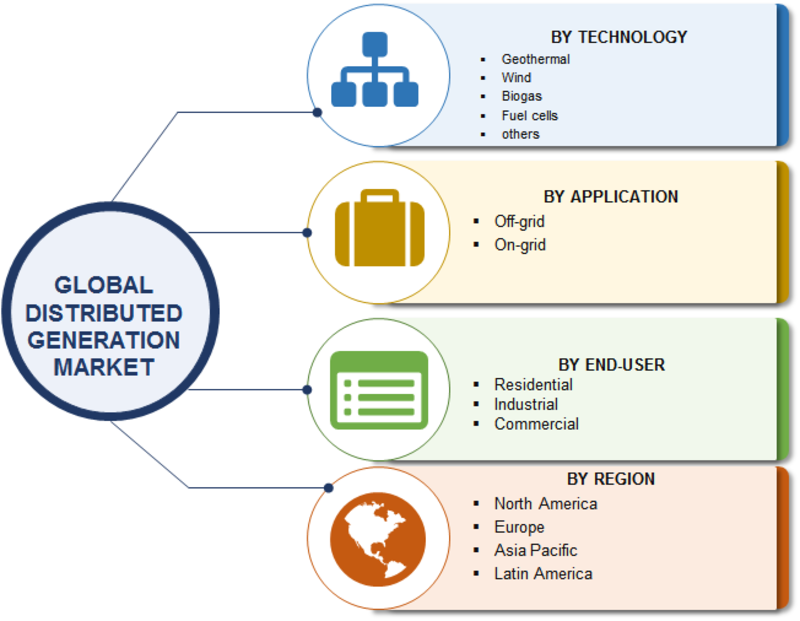 Global distributed generation market is expected to witness substantial growth during the forecast period, as the systems are mainly based on renewable sources of energy. Geothermal plants also contribute to the market, with Europe accounting for the largest market share. Europe has over 100 geo thermal stations installed, which produced about 15 TWh of electrical power in the year 2016. The installed capacity in 2016 was 2.5 GWe and is expected to reach 3 GWe by 2020. North America holds the second largest share in the geothermal segment with over 77 installed plants and an installed capacity of 3,086 MW.

Decentralized generation is a decentralized and relatively flexible technology, where one or more power stations are located close to the load. Each power station approximately has a capacity of about 10 megawatts and these systems can comprise multiple generation and storage points. Distributed generation consists of distributed energy resources, which typically utilize renewable sources. Renewable energy resources include solar, wind, fuel cells, hydro, biogas, bio mass and geothermal power. Decentralized generation can help deliver reliable and clean energy to the users, while minimizing the losses during transmission. Current electricity distribution system worldwide is dominated by centralized system. However, it is estimated that there will be a substantial growth of Distributed Generation Market mostly because of the developed economies.

Solar panels have become cost effective and are a major driver for the growth of the distributed generation global market. Additionally, governments around the globe are developing policies to encourage the use of renewable sources of energy, due to their benefits including reduced emissions and energy security. As per the reports from Global Wind Energy Council, there has been a substantial growth in the total wind farms installed globally in 2017. Numerous offshore wind farms that are being developed, majorly contribute to the growth of the global Distributed Generation Market.

Standalone off-grid systems are becoming popular with users as it gives them independence from utility service providers. Off-grid systems are usually cheaper for residents at remote locations in comparison to the costs involved in obtaining a utility service. A major advantage for off-grid users is that they are not subjected to blackouts and increasing rates of electricity. Off-grid systems mostly involve judicious use of energy. However, a few of its disadvantages are the need for regular maintenance and troubleshooting. Another major drawback of standalone off-grid systems is that surplus energy is wasted, whereas in grid tied system all additional energy is sent to the grid.

The market can grow at a considerable rate of more than 10.14% over the coming years.

The global market for distributed generation shows excellent growth scope and has the potential to gain a better position across the globe by 2030.

What are the primary market growth boosters highlighted in the report?

Solar panels becoming more cost effective, government policies striving to boost the use of renewable sources of energy and development of a number of offshore wind farms are the primary market growth boosters that have been highlighted in the report.

What types of technologies have been listed in the report?

Fuel cells, solar, geothermal, biogas, wind, and others are the main types of technologies have been listed in the report.

Distributed Generation Market predicted to grow at more than 10.14% by 2030