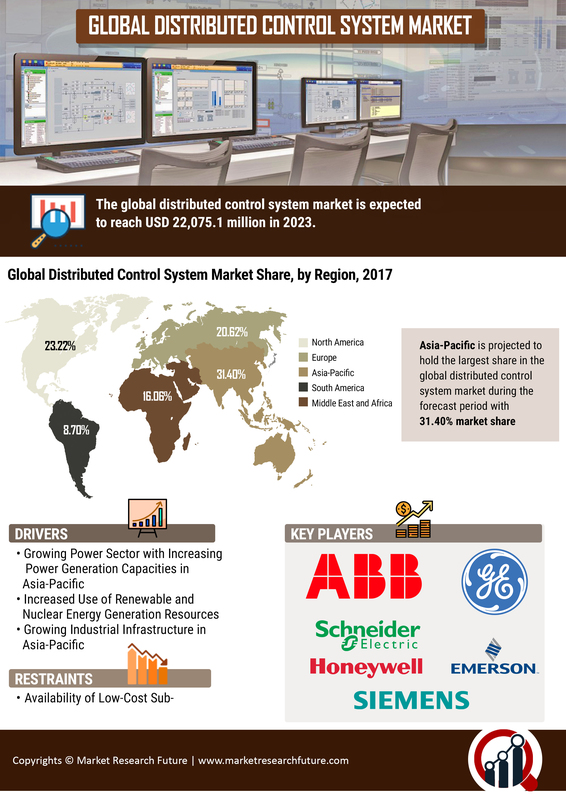 DCSs (distribution control systems) are critical in the manufacturing industry since they control and manage processes. There is a dedicated controller that controls each process element set of machines in DCS. It is made up of a large number of local controllers located across the plant control area, all of which are linked by a high-speed communication network. Data acquisition and control functions are carried out in a DCS control system by many DCS controllers, which are microprocessor-based units spread across the plant functionally and geographically.

Over the last few decades, the power sector has seen substantial growth in terms of power capacity increase, with major integration of disruptive technologies to attain clean energy targets around the world. Due to the rising need for energy efficiency, while reducing power disruptions, global investment in the power sector reached USD 757 billion in 2019. One of the primary drivers driving the DCS market is the growing power generation capacity, particularly in developing nations. Rapid population growth and modernization have resulted in a rise in electricity generation. Various power generation components and processes, such as boiler side valves, fans, turbine valves, and boiler coal firing, are controlled by distributed control systems. Municipal spending has also expanded to keep up with the growing urban population shift.

COVID-19 has led to severe impact across all the industries around the world. The rapid spread has led governments across the globe to take stricter actions for the operations of industrial plants and offices, leading to stricter lockdowns. The lockdown had a notable impact on the power sector overall as power demand had decreased majorly from commercial and industrial sectors.


The power sector has been witnessing significant growth in terms of power capacity addition from the last few decades with significant integration of disruptive technologies to achieve clean energy targets across the globe. According to World Energy Investment Report 2020, the global investment in the power sector was USD 757 billion in 2019 owing to the increased demand for energy efficiency while preventing power outages. The increasing power generation capacity, especially in developing countries, is also one of the major factors driving the DCS market.


The power sector is witnessing the involvement of more renewable energy resources, which would enhance the grid development projects, including distributed control systems and microgrids technologies. For instance, according to the International Renewable Energy Agency Report 2020, Asia-Pacific accounted for 54% of new renewable capacity additions in 2019, increasing its renewable capacity by 95.5 GW. Emerging markets such as India, China, and other South-East Asian countries focus on investing in renewable energy to meet the power demand. For instance, India is forming attractive policies and subsidies to boost solar power projects to achieve 175GW of renewable target by 2022.


Over the last decades, China has become a global manufacturing hub, with many multinational companies setting up high-volume production facilities in the country. Countries such as Taiwan, Thailand, and Indonesia have a great scope for DCS as they are witnessing significant industrialization. Moreover, in these countries, along with the expandingmanufacturing facilities, competition among manufacturers is also growing. China and India are the fastest-growing economies in Asia-Pacific, and the manufacturing industry is expected to grow substantially during the forecast period.


The distributed control system is a modern and highly interactive integration platform that provides process control functionality and real-time data connectivity between the utilities and the end-users. However, some utilities use programmable logic controllers PLC-based systems instead of distributed control systems. Though DCS is considered the primary solution for process automation, many PLC providers or vendors pursue a single integrated architecture based on PLCs and claim that a PLC-based system is one of the best solutions for power plant automation.


Industries such as oil & gas, power, chemicals, and metals & mining, are mature industries, and the technology has paved its way forlong for improving the manufacturing processes with prevalent systems, such as DCS, SCADA, and PLC. The oil & gas industry has an opportunity to redefine its coverage through automation solutions. After the 2014 oil price decline, short-term budgets and investments are attracting stakeholders to gain profits and strengthen their position in the market. Most of the oil & gas operators have been adopting DCS for accelerating the exploration & production processes.


Hardware components are an integral part of the DCS system, which are physical devices integrated intothe DCS network to perform any action given by the user. Hardware components in DCS include application processors, I/O modules, sensors, actuators, transmission cables, hubs, controllers, data recorders, workstations, and communications networks. These components are distributed on the three-tierethernet to ensure timely data transmission and system integrity.


Services form one of the mostcrucialaspects of the DCS. Services include project management, operations, and maintenance of the system to ensure continuous operation. After continuous operation over time, the system response rate becomes slow, resulting in gradual performance degradation, which causes issues in the server. For dealing with and diagnosis of such issues, services of the DCS component are necessary.


The continuous process is a streamlined process that involves the production of products continuously, that is, 24 hours a day without any interruption. The industries involving continuous processes are petrochemicals, fertilizers, iron & steel, oil & gas, power, chemical,and water treatment system plants.


The oil & gas plant or refinery operations consist of numerous complex processes, which always need to be monitored and controlled. Some of the major oil refining processes controlled by DCS are vacuum distillation, hydrocracking, naphtha hydrotreating, and coking.


Power generation is a continuous production process wherein different operational facilities, which may be distantly placed, need to work together to transmit electricity to consumers efficiently. DCS is installed in the power plant to centralize the control and monitoring of the entire plant in a single location


Chemicals are primary inputs for many industries, such as construction, retail, energy, defense, aerospace, information technology, healthcare, hospitality, transport, and plastics. These related industries are growing globally due to the growing population, which has led to an increase in demand for chemicals.


Paper & pulp are major parts of the packaging industry, and their demand is growing globally due to the increasing use of pulp-derived products for packaging. Additionally, the growing number of students at educational institutes and habitual readers also increases the demand for the paper segment.


Some of the other major industries that use DCS include textile, cement, water treatment, glass, sugar, and automotive. The production process in all these industries is well developed, and industrial automation is the way forward to further improve efficiency and the overall output of the industry.


North America is a prominent region in the distributed control system market. The growth of the regional market can be attributed to the rapid growth of the oil & gas industry and the rising demand for power generation.


Asia-Pacific is one of the largest markets for distributed control system market in the world and is expected to be one the fastest-growing markets during the forecast period, mainly due to industrialization and urbanization.


An increase in power generation capacity in the Middle East & Africa is a major factor driving the use of DCS in power plants, contributing to the growth of the distributed control system market in the forecast period. Middle Eastern countries are focused on meeting power generation targets from renewable energy.


The demand for DCS is expected to grow substantially during the forecast period, primarily due to the increasing need for power generation and the rising South American demand for an efficient manufacturing process. South America has some of the most important natural resources in the world.

In the competitive landscape, the report covers growth strategies adopted by the companies between 2020 and 2021. Companies adopted various strategies to achieve leading positions in the global distributed control system market. The key strategies followed by most companies within the global distributed control system market were product development and contracts & agreements.

How Big is the Distributed Control System Market market in future?

Who are the Top players in the Distributed Control System Market over the globe?

How the Distributed Control System Market grow in foretasted period?

By increasing use of renewable energy sources to lead the enhancement of grid development projects, demand for clean energy including DCS and microgrids technologies are the main growth factors of the DCS market.

Which region to has the largest share in the global DCS market in upcoming years?

Asia-Pacific market is holds the largest share in the Distributed Control System Market during the forecast period.

What are the main regions gaining the most of the market?

Asia-Pacific, North America, Europe, the Middle East & Africa, and South America are the main regions gaining the most of the market.

The Global Distributed Control System Marketis Projected to Witness Exponential Growth during the...