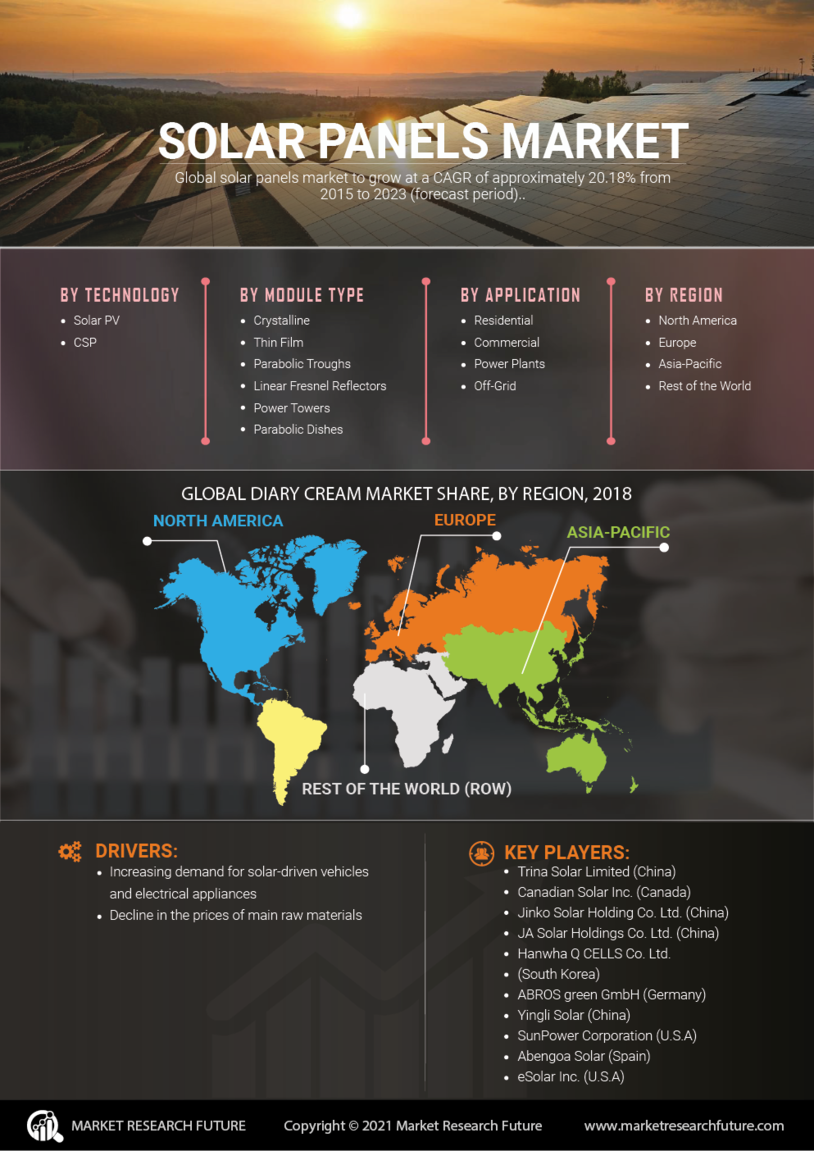 Solar panels are described as an assembly of photovoltaic cells that are mounted in a framework for technology. A solar panel is a silicon-based layered semiconductor module that can produce electricity from sunlight. This photovoltaic effect is created by the flow of electrons inside the module, which can be maximized by the increased hours of exposure to sunlight. In recent years, solar panels have been dominating the renewable energy market due solar power’s ability to reach grid parity as conventional energy resources and technological development use sunlight as a source of energy in order to generate direct current electricity through photovoltaic cells.

COVID-19 has led to severe impact across all the industries around the world. The rapid spread has led governments across the globe to take stricter actions for the operations of industrial plants and offices, leading to stricter lockdowns. The lockdown had a notable impact on the power sector overall as power demand had decreased majorly from commercial and industrial sectors.

Solar power is one of our planet's largest energy sources as sunlight is a plentiful and uninhibitedly accessible energy asset. The measure of sunlight-based energy that arrives at the world's surface in one hour is more than the planet's all-out energy prerequisites for an entire year. Due to the growing focus on reducing carbon emissions and the effects of generating electricity using non-renewable sources, the demand for renewable energy solutions is expected to increase, including solar panels. Thus, the increasing demand for energy generation from renewable energy sources is expected to drive the growth of the global solar panels market during the forecast period.


LOW ENERGY CAPACITY IN COMPARISON TO OTHER SOURCES

The most concerning issue that solar energy innovation presents is that energy is just produced while the sun is shining, implying that evening time and cloudy days can interfere with energy generation. This interference would not be an issue if there were minimal expense methods of putting away energy as sunny periods can create an overabundance of power that could cause a short circuit. Furthermore, the solar energy we can utilize changes as per the hour of the day and the period of the year. Thus, the low energy capacity of solar systems compared to other sources is expected to restrict the growth of the global solar panels market to a certain extent during the forecast period.

Several governments across the world are increasing focus on the electrification of rural areas. Colombia's economy is at a developing stage, and numerous areas in the country do not have access to grid-connected electricity. The Columbia Solar Subsidy initiative is expected to offer a subsidy to grid-isolated municipalities in the country. Similarly, Brazil is one of the countries in South America, which has witnessed significant growth in energy demand. Energy consumption in the country is anticipated to grow at a steady rate during the forecast period, thereby presenting lucrative investment opportunities for the market players.


Solar Photovoltaic (PV) technologies are vital components in solar power generation. A single solar PV device, also known as a solar cell, is a small device and typically produces about 1 or 2 watts of power. These cells are made of different semiconductor materials and are often of limited thickness.


Thin-film solar module cells are second-generation solar cells made by depositing thin layers or a thin film of photovoltaic material on substrates, such as glass, metal, or plastic.


Crystalline module type is one of the most commonly used solar cells in commercially available solar panels. These PV modules type is classified as the first generation of solar modules.


Solar panels are used in residential applications to power electrical appliances and equipment. The use of solar power systems helps homeowners in reducing their utility bills. The most commonly used solar technologies for residential homes are solar photovoltaics for electricity, passive solar design for space heating & cooling, and solar water heating.


Solar panels are used in various industries, such as food & beverage, healthcare, textile, oil & gas, and automobile, to serve multiple purposes such as lightning, heating, cooling, and run electrical appliances and devices. With the increasing adoption of solar technologies for industrial usage, developed countries can find a surge in the use of renewable power for their energy needs.


North America is a prominent region due to an increase in installing solar PV equipment and incentives and government policies to promote the use of solar PV systems.


Europe is a key region due to the growing demand for renewable energy sources and the increasing installation of solar power systems in residential and commercial sectors.


The demand for solar panels in Asia-Pacific is expected to grow significantly due to the growing demand for solar power energy sources and increasing investments in the development of rural areas in the region. Solar energy is considered as the best replacement for conventional energy sources to decrease carbon emissions by meeting the electricity needs in the region.


Several countries in the Middle East & Africa do not have universal access to electricity, and stakeholders in the energy industry are focusing on adopting renewable energy sources to reduce carbon emissions in the region. Furthermore, to help the low-income group, many solar firms operating in the region have introduced financial systems to help consumers pay for the solar panels in installments.

The global solar panels market is characterized by the presence of many local, regional, and global vendors. The market is highly competitive, with all the players continually competing to gain a larger market share. High competition, rapid advances in technology, frequent changes in government policies, and stringent environmental regulations are some of the critical factors that could restrain the market growth. The vendors compete in terms of cost, product quality, reliability, and aftermarket services. Vendors must provide cost-effective and efficient products to survive and succeed in a competitive market environment.

The growth of the vendors is dependent on market conditions, government support, and industrial development. Thus, the vendors should focus on expanding their presence and improving their service. Trina Solar (China), Canadian Solar Inc. (Canada), Photonix Solar Private Limited (India), Jinko Solar Holdings Co Ltd (China), SunPower Corporation (US), Esolar Inc (US), and First Solar Inc (US) are some of the key players operating in the global market.

At what CAGR can the solar panels market expand?

The solar panels market can surge at 27.18% CAGR in the assessment period.

What is the estimated valuation for the solar panels market?

The solar panels market poised to garner at a considerably high valuation by 2024.

Who are the key players of the solar panels market?

What is the solar panels market growth driver?

The growing adoption of solar panels due to growing environmental concern is expected to prompt the global solar panel market expansion.

What is the regional analysis of the solar panels market?

APAC is the largest producer and supplier of solar panels. Thus, the APAC solar panels market is expected to surge.

What are the areas of application of solar panels?

Solar panels are used for residential, utilities, and commercial purposes.

What are CSP technology?