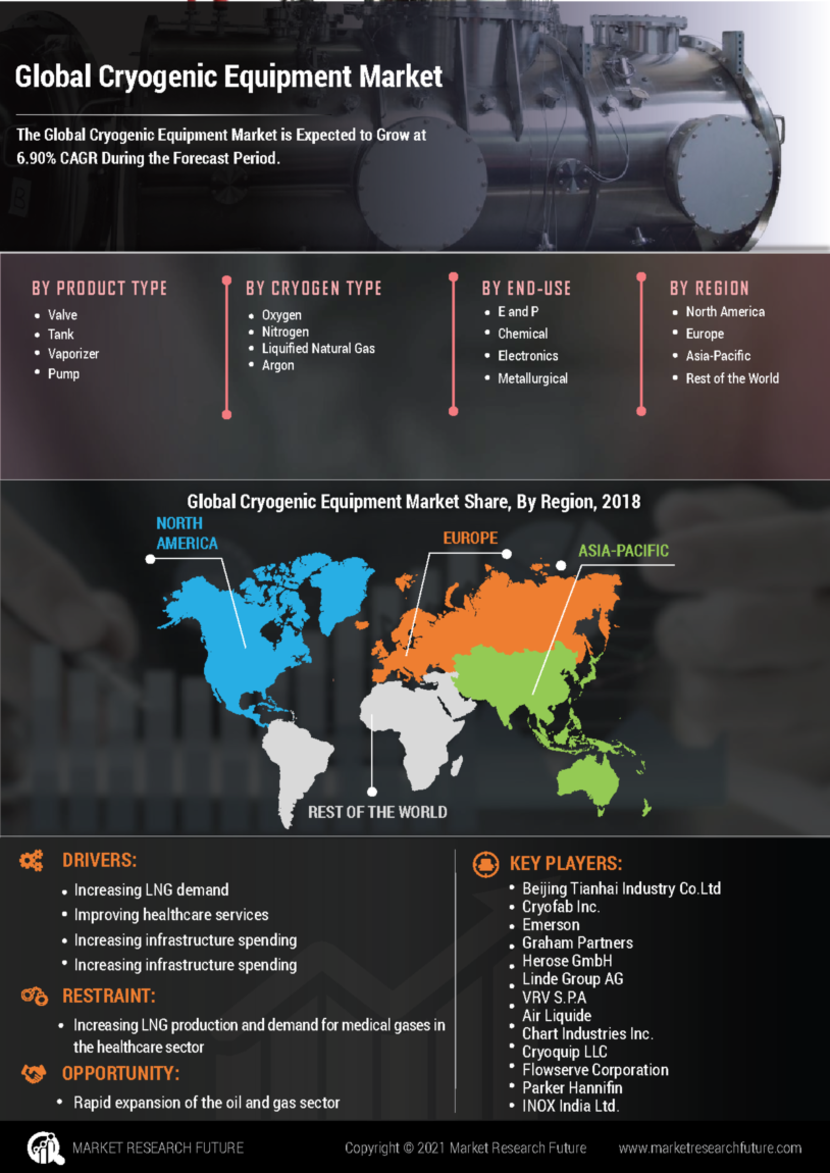 Cryogenic Equipment Market is Expected to Grow at  USD 24.9 Billion,  5.36% CAGR During the Forecast Period.

The global Cryogenic Equipment market has been segmented based on product type, cryogen type, end-use, and region. On the basis of end-use, the market has been segmented into energy & power, chemical, electronics, shipping, and metallurgical, among others. Energy & power subsegment is expected to dominate the global cryogenic equipment market. Additionally, countries such as the US and China are focusing on reducing the carbon emission, which is expected to increase gas-based generation.

Global cryogenic equipment market is expected to witness substantial growth during the forecast period owing to rapidly growing demand for energy & power with the increase in the growth of use of LNG for eco-friendly fuel-based power generation. As per Energy Information Administration (EIA), in 2019, LNG exports are expected to rise to 5% of overall US gas demand and reach 10% in 2024. Similarly, National Energy Administration’s (NEA) target for natural gas in China’s total fuel mix is 8.3% to 10% by 2020 from 5.9% in 2015. This would lead to growth in the demand for LNG and thus arrangements to handle its transportation to boost the growth of cryogenic equipment.

At what CAGR can the cryogenic equipment market expand?

The cryogenic equipment market can value at 6.90% CAGR in the study period.

What is the estimated valuation for the cryogenic equipment market?

The global market of the cryogenic equipment can touch substantial valuation by 2027.

Who are the key players of the cryogenic equipment market?

What is the cryogenic equipment market growth driver?

What is the regional analysis of the cryogenic equipment market?

The rapid expansion of the oil and gas sector can support the cryogenic equipment market in APAC.

Cryogenic Equipment Market Is Expected To Showcase Rampant Growth Over 2024