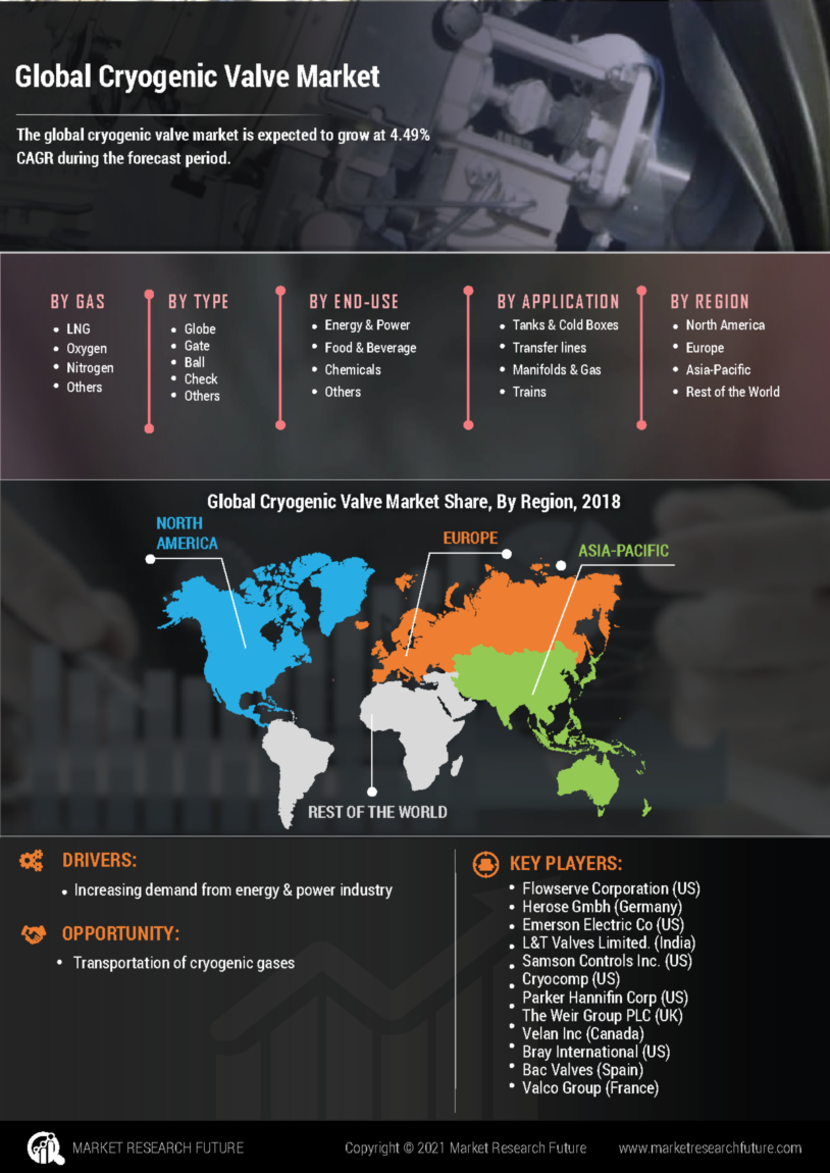 Cryogenic valve market is expected to grow at 4.49% CAGR during the forecast period.

Cryogenic valve is majorly used for transportation and storage applications by various industries. These valves are operated in low temperature or extreme cold applications such as transportation of LNG gas and production for industrial application gases.  Different valves are being used for the liquefied natural gas (LNG), nitrogen, oxygen, argon, and helium which operate at different temperatures. LNG is the major segment which holds largest market share, owing to increase in import of 12.7 MT of LNG by China. Other countries including South Korea, Pakistan and Turkey, which together added a combined total of 11.9 MT in imports which is driving the LNG growth rate in Asia-Pacific. Hence, it is estimated that there will be a substantial growth of the global cryogenic valve market mostly due to developed transportation infrastructure for LNG.

The increasing demand for cryogenic valve market is due to the rising need for LNG and other industrial gases. The increasing LNG trade across the globe, due to its eco-friendly nature has led to the rising demand for storage and transportation of cryogenic gases, which has driven the market growth. Cryogenic valve is also used in food & beverage, chemical, pharamaceutical industries etc. for safety and reliability operations. Cryogenic valve is also used in various applications such as Liquefied Ethylene, Propylene, CNG and LPG applications. Hence, due to its wide application and growing opportunuties in transportation, LNG and CNG contributes to the growth of the global cryogenic valve market.

Ball valve is projected to hold the largest market share by type, in the forecast period. Due to its reliable and air sealing, they have better flow characteristics over the other type of valves. Ball valves are quick and simple in operation and preferred for automation. These valves have 90-degree rotational feature, which opens and closes the valve in efficient and reliable way.

The global cryogenic valve market is projected to grow at a significant rate during the forecast period, mainly due to the increasing demand from energy & power industry, followed by steel production, research labs, food & beverage industry. They are installed in other industries in various processes such as liquefication, transportation, and regasification.

Asia-Pacific is expected to hold the largest market share in the global cryogenic valve market in 2017, due to rising transportation of LNG. Countries such as China, India, Australia, and Japan have huge demand for LNG in electronic equipment, chemicals, and metallurgy processes to meet the growing demand from industrial sectors. According to World gas LNG report 2018, Europe stood the largest importing in LNG, owing to increased use in power generation, which is followed by Asia-Pacific as second, which drives the cryogenic valve market substantially.

Global cryogenic valve market is expected to witness substantial growth during the forecast period, as the trend is moving towards harnessing energy from LNG, which is non-toxic and eco-friendly. Hence, cryogenic valve market is growing rapidly.  Industries are using LNG as source of energy, while rise in on-site production plants for industrial gases and devlopment in industrial infrastructure is driving the market growth during the forecast period. Apart from power generation industry natural gas is also used in chemical, food & beverage, marine, stell manufacturing industries which drives the market growth. The LNG segment held the largest market in 2017 and is expected to grow at the fastest CAGR during the forecast period.

Global cryogenic valve market has been segmented based on gas, type, end-user, application, and region. Based on gas, the market is classified into LNG, oxygen, nitrogen and others. LNG segment is leading the market and has the largest market share, mainly due to its non-flammable characteristics and easy transformation from natural gas to LNG and vice-versa which allows to use at wide range of application such as power generation, industrial uses and alternative transportation fuel. Based on type, the market is segmented as globe, gate, ball, check and others. Ball valve segment dominates the market as it provides efficient heat transfer capability, provides additional blow out protection when assembled with viton stem seals, double sealing provides more reliability and security of operation. It has a good flow characteristic over other valves. The cryogenic valve market is further segmented based on end-user, including energy & power, food & beverage, chemicals and others. Energy & power segment is dominating the market mainly due to large application of natural gas for power generation, Hence, it is anticipated to dominate the cryogenic valve market globally.

Why is cryogenic valve market expected to grow in the near future?

The cryogenic valve market is likely to gain popularity due to rising demand for LNG and other industrial gases.

What are the end-user segments of the cryogenic valve market?

The end-user segments are energy & power, chemicals, food & beverage, and others.

By type, which segment is poised to hold the largest market share?

The ball valve segment is anticipated to hold the largest market share.

Which region is supposed to lead the cryogenic valve market?

The cryogenic valve market is supposed to be led by APAC.

Who are the key contributors to the cryogenic valve market?

Cryogenic Valve Market Predicted To Grow At More Than 4.49% By 2027