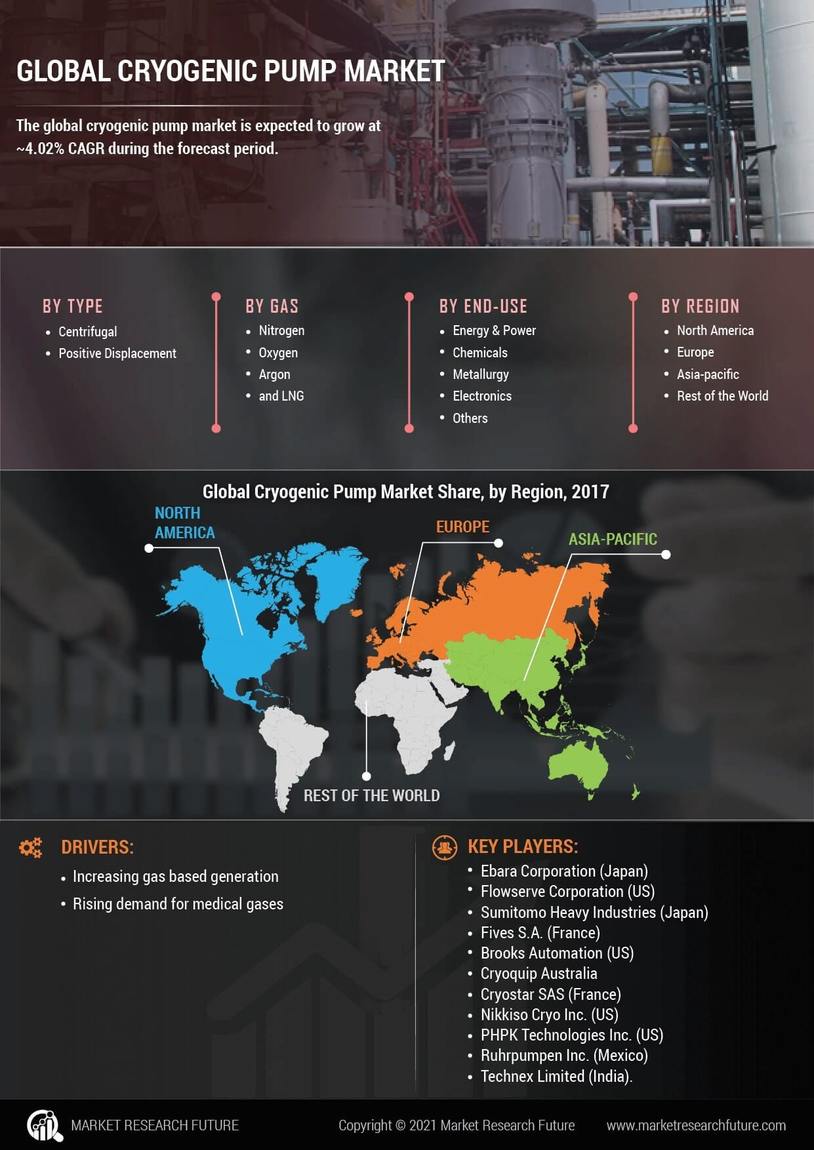 The Cryogenic Pump Market Revenue is expecting rapid growth in the global economy. A cryogenic pump is a pump that condenses the gases and vapors by capturing them and making sure that they are maintained at a low temperature. The widespread use of the pumps in the transportation of cryogenic fluids like oxygen, argon, and many more and adequately handling them makes it a popular choice.

The otherwise challenging process involved in transporting liquid gases, these cryogenic pumps make it look easy. An increase in the demand for various end-user industries like metallurgy, healthcare, chemicals, and power has proved to be the major push towards the Cryogenic Pump Market Growth.

COVID-19 pandemic has made the lives of every individual and business all across the world suffer a setback in terms of physical, mental, and financial stress. None of us would have ever expected the kind of losses that it has bought in every aspect. But, sitting back and waiting for the tough time to get over is indeed not a solution. What needs to be done is to move forward with the necessary support and mentorship.

This is what the report provides to the business across the market. It enables them to self-analyze themselves about the position in the current Cryogenic Pump Market Value. It also suggests ways to combat the losses suffered in the past and implement the new working pattern during the corona times. The in-depth Analysis by the industry experts would prove helpful for the company’s growth but would work as a morale booster at every step.

All the major players in the Cryogenic Pump global Market Share have focused on technology advancements to aid in the Cryogenic Pump Market Outlook. The mergers, acquisitions, and collaborations amongst them have proved to be the significant factors taking the global market to the heights of success. They have been acting as role models for the new comers to acting efficiently and in a planned way. The strategies and plans they all have been working on are for the good of the entire market of cryogenic pump. While the focus has always been on bringing the newest technology to the market, all the key players have been acting sensibly and responsibly towards it.

The growth of cryogenic pumps is mainly attributed to the increased demand for liquid gases across many end-user industries like metallurgy, chemicals, and many more.

The major drivers responsible for the growth of the Cryogenic Pump Market Trends include an increase in the demand for power and energy industry in almost all regions. With its increased demand, the need for cryogenic pumps has increased as well. With the increased power industry demand, the demand for the LNG-based generation of power, and the growth of the oil tankers for transportation are few other factors that act as drivers in the development of the industry.

The pump has a drive shaft, an I terminate static tube for support, and an outer pressure containment tube made up of stainless steel. But, if these are replaced by glass or epoxy composites instead of stainless steel, it would increase the efficiency of the pumps. Moreover, the governments have laid down stringent policies for the toxic games from steel industries, which tend to hamper the Cryogenic Pump Market Revenue. Change g prices of crude oil, which directly affects the Cryogenic Pump Industry, are also factors inhibiting the global Market Size.

Regulatory Implications development market has majorly been affected due to the regulatory implications laid down by the regulatory bodies and the governments to stop the emissions of toxic greenhouse gases. These gases tend to deplete the essential zone layer leading to various health-related and other problems. These emissions are a result of the manufacturing of steel. Stringent las for the steel industries directly impact the growth of the Cryogenic Pump Market Share.

This is because all its major parts are made up of stainless steel, and if the steel manufacturing gets affected, it increases the pricing for yeh pumps and slows down the growth to a great extent. Though these laws are necessary, some alternatives should be taken out by the industries to stop these hazardous emissions.

Various segments in the cryogenic pump market are:

Based on the type, the subdivisions of the market are as follows:

The segment that dominates the market is positive displacement expected to grow at a high CAGR during the forecast period. The feature that has been making it popular is the constant flow at variable pressures and viscosity.

Based on the end-user

Based on the end-user, the subdivisions of the Cryogenic Pump Industry are as follows:

The segment that dominates is oil and gas, with its widespread use in refining, LNG transportation, refueling, and many more. Also, the rise in the petrochemical industry is one reason for the growth of the segment.

Based on the regions, various segments of the cryogenic pump market are as follows:


The region that dominates the Cryogenic Pump Market Trends in the Asia Pacific due to the increased demand in the end-user industries like metallurgy, chemicals, and many more. Countries like India, Malaysia, China, and others have been acting as role players in the growth. Also, it is estimated that the Cryogenic Pump Market Value would grow at the fastest pace in the upcoming years. This rapid growth in the region is attributed to the growing needs of energy requirements and increased focus on renewable energy sources. Urbanization in most countries in the area is also one of the major factors influencing its growth.

We shall discuss the recent developments in the market in brief. A few of them are:

The report that has been prepared exclusively for the business dealing with the cryogenic pump markets has all the required details for the efficient and smooth running of the company. Starting from the market overview, the Global Market Analysis is based on the impact of COVID-19 and the market dynamics, including Market Growth factors, drivers, and restraints. The regulatory implications are also included in the report.

The market segmentation based on the type, end-user, and region has also been explained thoroughly. The major player of the market and the strategies they have been implementing have also been discussed in detail. The recent advancements discussed in the report help the companies to self analyze themselves and work accordingly. The report is indeed the best one to ensure things work perfectly for a business.

What is the expected growth rate of the market in the future?

The market is expecting a growth rate of 8.27% in the coming years.

What is the primary driving force for the growth of the cryogenic pump market?

The increasing demand for pumps in various end-user industries will ensure that the market expands greatly.

Mention the names of the primary critical players in the market?

Which end-user segment is expected to achieve the highest growth rate?

The energy and power sector segment is expected to attain the highest growth in the Cryogenic pump market.

Which region is growing fast in the Cryogenic Pump market?

The Asia-pacific region is expected to grow at the fastest rate during the forecast period.