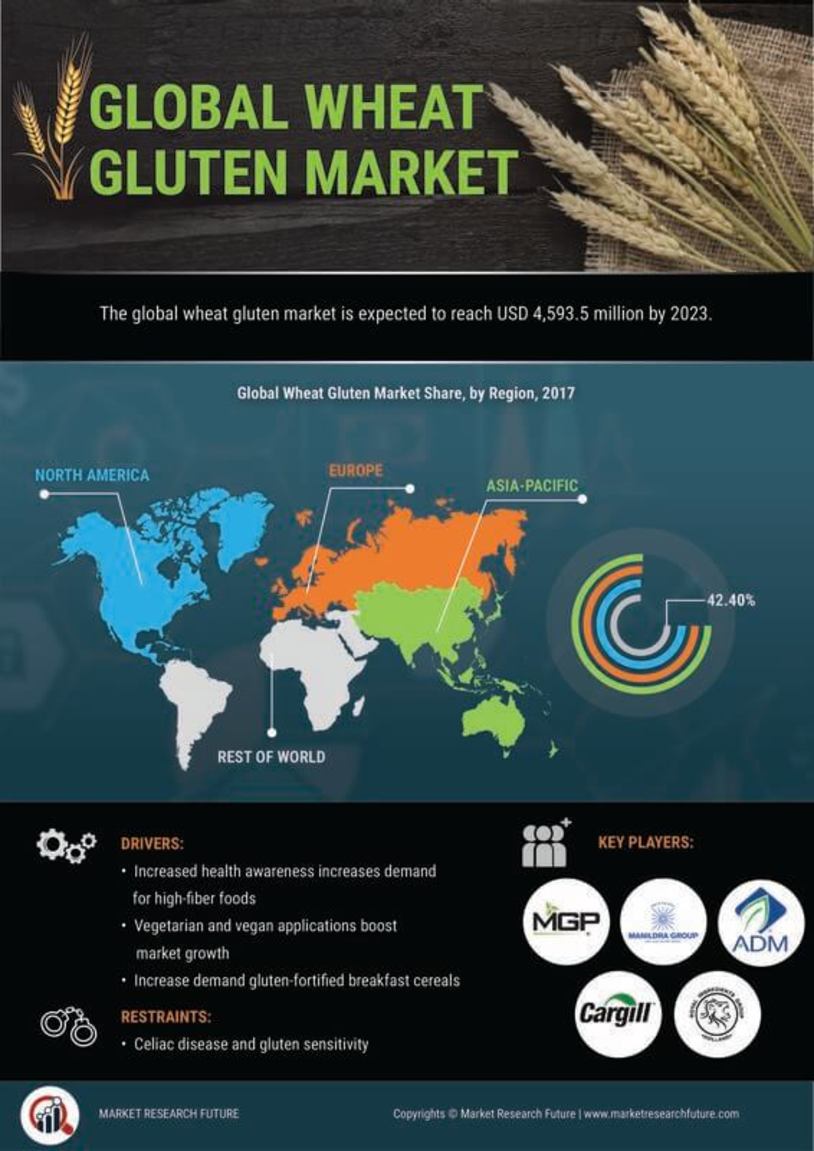 The worldwide wheat gluten market is estimated to expand with a significant growth rate of 8.90% during the analysis period of 2020 to 2027. Further, the worldwide market is predicted to witness a market value of USD 1.78 billion during the assessment period of 2027. Wheat gluten is a wheat starch by-product and is popularly known as high-protein food for vegans. Wheat gluten is extensively found in the high-protein dough preparation for baking with high quality. It is also used for nutritional therapy and hypoallergenic infant diets that are prepared with hydrolyzed proteins. The wheat gluten goes through enzymatic hydrolysis in the industry to develop its functional properties like film-forming, solubility, and emulsification.

The Market demand is increasing day by day because of its different market segmentations. Thus, the global market has been segregated based on application, region, and form. The Wheat Gluten Market size is growing in the pet food segment because of the increasing expenditure on pet humanization and pet food products in the U.S. and India's economies. Moreover, the consumers are opting out of meat consumption and choosing plant-based alternatives because of the changing preferences of consumers driven by growing awareness toward meat sourcing practices, animal-borne diseases, and their ecological impact.

As per the report, the Wheat Gluten Market trend is expanding with the continuous support of the intended audiences like commercial research and development institutions, end-use industries, wheat gluten manufacturers, exporters, traders, and importers, raw material suppliers, and distributors of wheat gluten. These intended audiences are requiring the wheat gluten based on the customer's demand over the product.

The ongoing pandemic has negatively impacted many marketing industries. However, the COVID-19 pandemic also had a profound impact on the global wheat protein market. During this pandemic period, many consumers have shifted their attention towards plant-based alternatives due to the rising awareness among the consumers regarding the impact of the pandemic on meat production.

As a result, the meat alternative brands' demands and sales have been increased. The unprecedented COVID-19 has forced consumers to adopt a healthier lifestyle and influenced the sales of dairy alternatives, plant-based snacks, and supplements. Likely, several market players have been engaged to propel the Wheat Gluten Market share in the further coming years.


The growing popularity of plant-based food and the growing importance of a healthy lifestyle are the two major driving factors for the Wheat Gluten Market. Moreover, the high demand for high fiber food and high demand for gluten-fortified breakfast cereals.

The U.S. Food and Drug Administration (FDA) has released an analysis of 702 samples that results show more than 250 products were gluten-free labeled in 2017. Hence, this kind of release of the report is expanding the Market demand in the forecast period.


As the affinity for sustainable food sources increases across the globe, that can increase the potential for plant-based proteins. It can bring more opportunities for the market players to enhance the market size.

Further, the global Market trend has more growth opportunities due to the increasing vegetarian and vegan applications around the globe.


Although the present global market has more growth opportunities and scope, some market restraints can hinder growth. However, the Wheat Gluten Market is predicted to face restraints in the forecast period due to the deceptive marketing practices and high cost of low-calorie diets.

Apart from that, the increasing celiac disease and gluten sensitivity can hamper the growth of the Wheat Gluten Market.


In addition, the high cost of low-calorie diets and limited technological developments might bring a major challenge for the Market demand.

Moreover, gluten sensitivity can be one of the biggest challenges for the market players. Hence, the market leaders are looking after these Wheat Gluten Market challenges to provide better product options to the customers.

As the Market demand is growing, it is projected that the worldwide market will witness a higher market share in the further coming years. Moreover, the Market growth relies on the growing demand for vegan and vegetarian applications worldwide.

Furthermore, regions like the Asia Pacific and Europe contribute collectively to the Market to enhance the market growth in the forecast period. Likely, it is expected that the global market has more growth potential.


The Wheat Gluten Market has been segmented into dietary supplements, bakery & confectionery, animal feed, and others in terms of application.

In the Market, the bakery & confectionery segment is projected to lead the global market due to the high dietary fibers and prevailing consumer awareness.


Based on the form segment, the global Market has been classified into two forms such as liquid and powder.

Among all, the powder segment is predicted to dominate the Market during the assessment timeframe.


Based on region segment, the Wheat Gluten Market has been divided into four key regions: Europe, Asia-Pacific, North America, and the rest of the world.

According to the Wheat Gluten Market trend report, several regions like Europe, Asia-Pacific, North America, and the rest of the world play an important role in the success of the worldwide market.

Europe is predicted to lead the global market by generating a higher market share of 43.55% in2018. This regional market is expanding because of the high demand for health-promoting food and the increasing consumption of vegan diets in the region. The Asia-Pacific regional market is registered to acquire the highest growth rate by generating the higher Market share in the assessment timeframe. This region is fueling the regional market growth due to the rising awareness about plant-based and nutritional food and increasing per capita disposable income in the Asia Pacific region.

These marketing leaders apply new strategies like innovations, advertising, and product promotion to show their presence in the Wheat Gluten Market. Apart from that, they are also investing more in research and developments to expand their business in the global market.

The Wheat Gluten Market size report explains that the global market has received a growth rate during the covid-19 period where other marketing sectors have been affected negatively. Further, the global market has witnessed significant market value in the past few years and is projected to grow on a large scale in the upcoming years.

What would be the global market valuation by 2027?

Wheat gluten market valuation would be USD 1.78 billion by 2027.

What would be the globalmarket CAGR during the forecast period of 2020-2027?

Wheat gluten market CAGR would be 8.90% during the forecast period.

What are the forms included in the global market report?

Liquid and powder are two forms included in the wheat gluten market report.

Which region would lead the global market?

Name the players included in the global market report.

Cargill Inc. offers a full range of food, agriculture, financial and industrial products throughout the world. The products include GluVital which provides consistency in flour, improved dough machinability and extended shelf life for finished products. The company was established in 1865 and is upfront towards broadening their business portfolio through acquisitions and expansions. The company has a wide range of product offerings and is highly focused towards new product offerings. Moreover, the company invests heavily in R&D activities to keep improvising their products.

Archer Daniels Midland Co. which is another established player listed in the wheat gluten market is identified to have their focus on business expansions, acquisitions, and joint ventures to assure sustainable development. ADM is also a leading market player in U.S. grain and grain products companies, both nationally and internationally. Moreover, the company is keenly focused on the acquisition of their players in the feed business to expand their production capacity. The company has a wide range of product offerings like grain and oilseed processing, with wheat gluten being a very small part of the corporation’s activities. ADM still operate at least one wet-milling gluten facility in Shawnee Mission, Kansas.

The other prominent players in the market include Tereos (France), AB Amilina (Lithuania), Permolex International (Canada), Royal Ingredients Group (Netherlands), and other players. Companies are majorly focusing on acquisitions followed by expansions and joint ventures. Additionally, the companies are inclined towards new product launches and their product promotions to strengthen their marketing base.