Sodium Starch Glycolate Market information: by product (potato, corn, wheat, and others), by application (pharmaceuticals, food ingredients, adhesives, textile, and others), and by region- Forecast till 2030 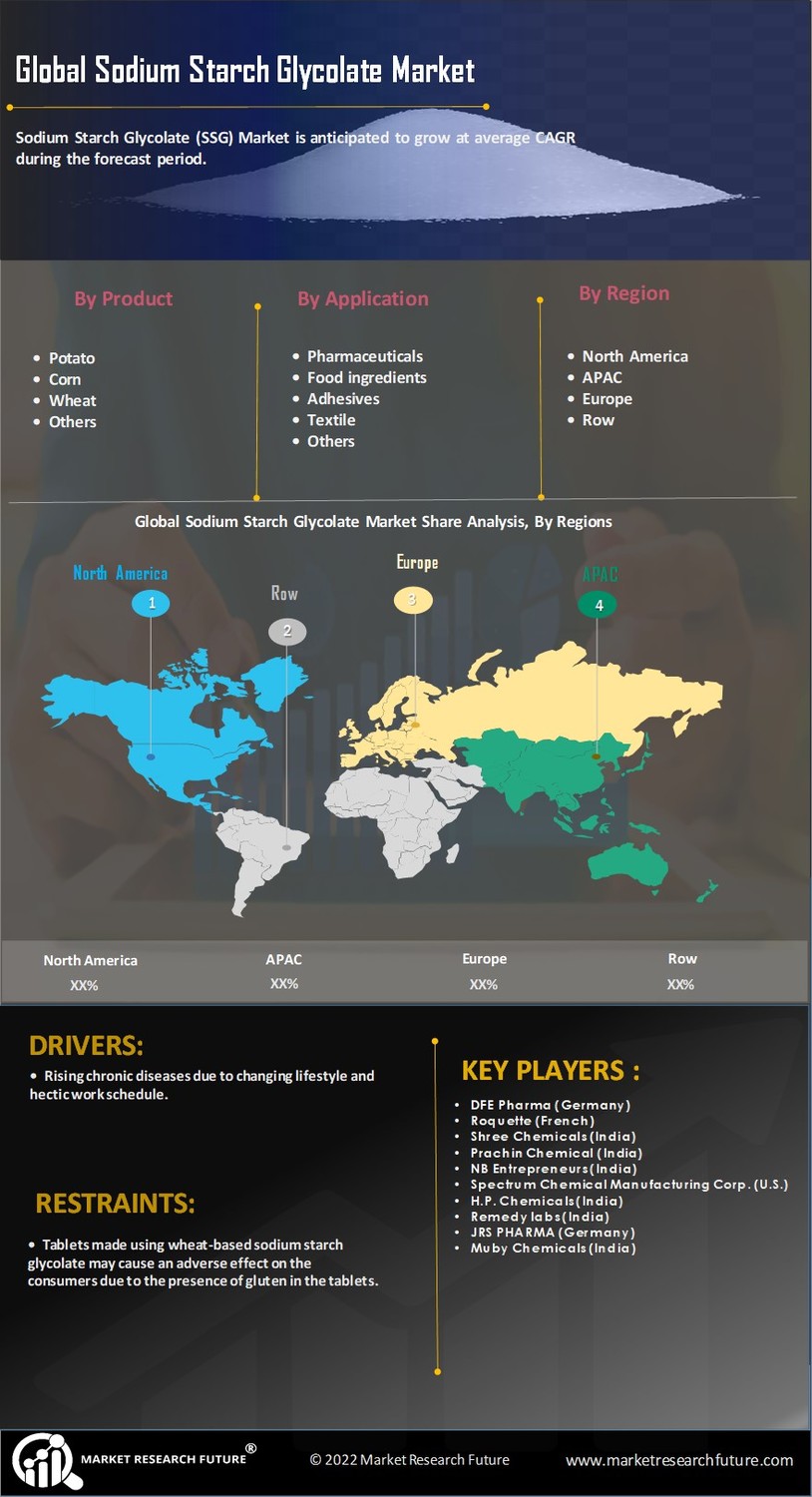 Sodium Starch Glycolate Market Overview Sodium Starch Glycolate Market is projected to be worth USD 150.4 million by 2030, registering a CAGR of 2.98% during the forecast period (2022 - 2030). Sodium Starch Glycolate (SSG) Market is expected to develop at a significant rate. Carboxymethylating starch from diverse sources, such as potato, corn, rice, and wheat, yields sodium starch glycolate (SSG). Because of its capacity to absorb water quickly, it is commonly employed as a disintegrant in the formulation of tablets and capsules. Sodium starch glycolate is made mostly from potato and corn starch. It is used in wallpaper adhesives and food goods such as snacks, meat products, and juices as a thickening and stabilizer. Due to the high number of car manufacturers, the comeback of the automobile industry is predicted to increase demand for adhesives. Because of its cost-effectiveness, the use of sodium carboxymethyl starch in sodium carboxymethylcellulose has increased. Because of changing lifestyles and an aging population, the number of noncommunicable diseases such as cardiovascular, high blood pressure, and chronic respiratory diseases is expected to rise. Because of expanding health awareness and longer life expectancies among customers around the world, its use in the pharmaceutical sector is increasing. The pharmaceutical business is seeing an increase in demand for the product as chronic diseases become more prevalent as a result of changing lifestyles and stressful work schedules.

The global sodium starch glycolate market is divided across five regions namely North America, Europe, Asia Pacific, Latin America and the Middle East & Africa. North America emerged as the leading regional market due to the presence of various drug manufacturers and biotechnological pharma companies in the U.S. Rising chronic diseases due to changing lifestyle and hectic work schedule are driving the demand for the product in the pharmaceutical industry. Additionally, according to Pharmaceutical Research and Manufacturers Association, U.S. based companies’ accounts for half the world’s research and development in pharmaceuticals, which is likely to propel the market growth. The revival of the automotive industry in this region is expected to fuel the demand for adhesives due to the prevalence of large no of the automotive manufacturers.

Europe is another substantial region in this market due to the extensive research and development activities in the region. For instance, the healthcare spending in Germany exceeded USD 400 billion of which 14% accounted for pharmaceutical products.

The Asia Pacific region is largely driven by the rapid growth of the Indian pharmaceutical industry. According to the Indian Brand Equity Foundation, Indian pharmaceutical market is expected to be valued at at USD 100 billion by 2025. Growing per capita income and rising health awareness among the consumers is projected to fuel the product demand in the healthcare industry. 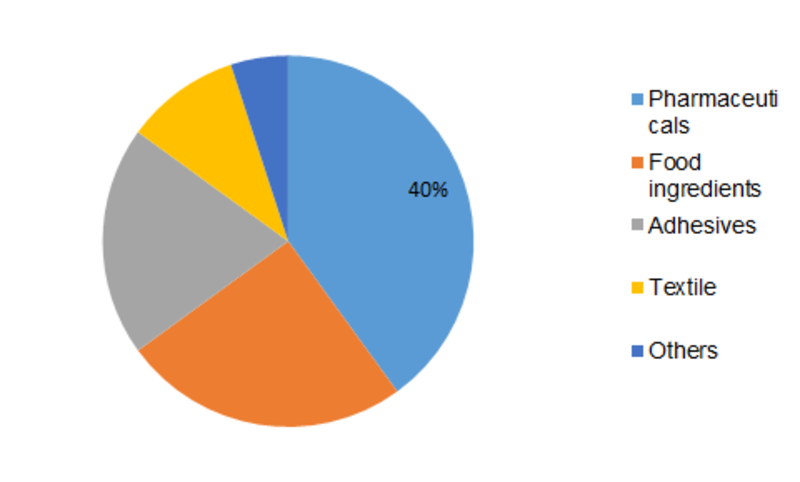 The global sodium starch glycolate market is segmented into product, applications, and region.

On the basis of the product, the market is divided into the potato, corn, wheat, and others.

Based on the application, the global sodium starch glycolate market is segmented into pharmaceuticals, food ingredients, adhesives, textile, and others.

Geographically, the market is divided into five key regions, including Asia Pacific, North America, Europe, Latin America, and Middle East & Africa.Use of sodium carboxymethyl starch in sodium carboxymethylcellulose has augmented due to cost-effectiveness. Increasing number of non-communicable diseases such as cardiovascular, high blood pressure, and chronic respiratory diseases due to changing habits and aging population is likely to increase the product demand. Its usage is growing in pharmaceutical industry due to rising health awareness and longer life expectancies among consumers across the globe. For instance, Primojel, an SSG manufactured by DEF pharma is widely used for making tablets and capsules. Presence of huge biotechnological pharma companies in the U.S. is likely to fuel the demand for the product. Surging demand for adhesives from automotive and packaging industry is driving the market growth in the North America, Europe, and Asia Pacific region. It is also used as an additive in glues for plywood. Growing use of paper bags due to durability and eco-friendliness is fueling the demand for adhesives.  It is also used in cosmetics and beauty products due to its properties such as longevity in moisturization and smoothness. Recently, Roquette Co. announced the launch of new SSG product under brand “Beauty by Roquette” to be used in the cosmetics industry. It has also introduced modified starches, which are used in adhesives. Increasing consumer spending on eatables is expected to drive the growth of the market globally. Tablets made using wheat-based sodium starch glycolate may cause an adverse effect on the consumers due to the presence of gluten in the tablets.Recent Development


DEF pharma's Primojel, an SSG, is commonly utilized in the production of tablets and capsules. The presence of large biotech and pharmaceutical companies in the United States is anticipated to boost demand for the product. The Sodium Starch Glycolate Market is growing due to increased demand for adhesives from the automotive and packaging industries. Roquette Co. announced the development of a new SSG product for the cosmetics sector under the brand Beauty by Roquette. Modified starches, which are utilized in adhesives, have also been introduced. Globally, rising consumer expenditure on food is likely to propel the Sodium Starch Glycolate Market forward.

What is sodium starch glycolate?

Sodium starch glycolate is a starch derivative obtained by carboxymethylating starch from potato, corn, rice, wheat, or other sources.

What is sodium starch glycolate used for?

Sodium starch glycolate is mainly used as a disintegrant in the formulation of pharmaceutical tablets, as well as a thickener and stabilizer in various industrial formulations, including paints and coatings.

The growing demand from the pharmaceutical industry is the major driver for the sodium starch glycolate market.

Leading players in the market include DFE Pharma, Roquette, and Prachin Chemical, among others.

Growing Use of Sodium Starch Glycolate In The Pharmaceutical Industries As A Disintegrant Is Set ...