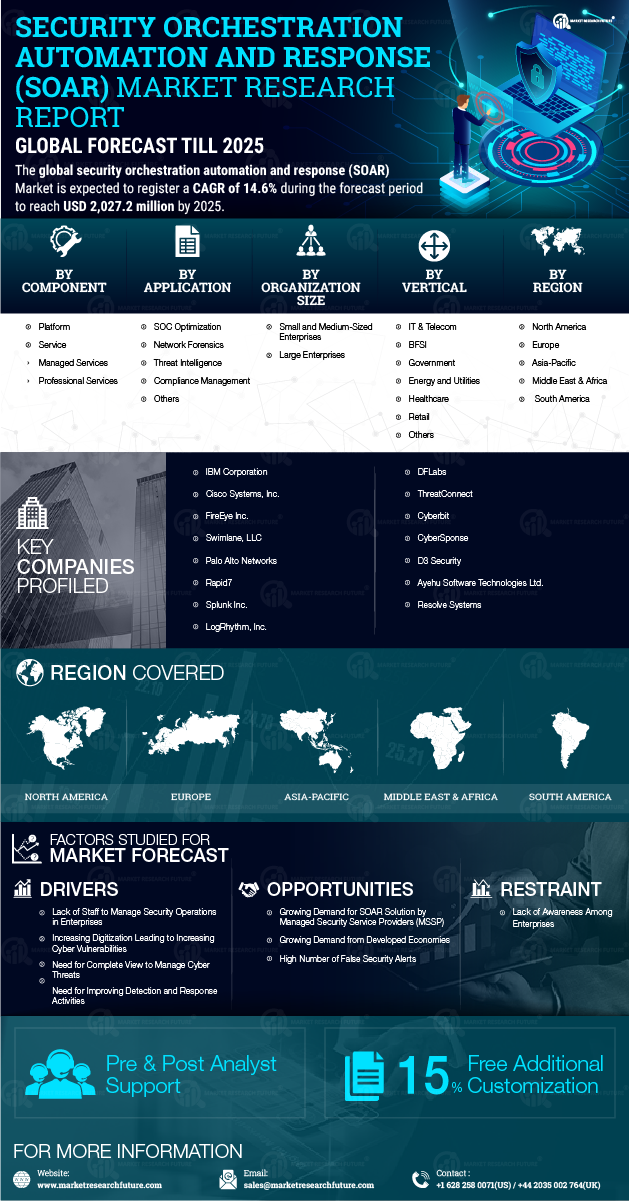 
The Security Orchestration Automation and Response (SOAR) Market is expected to register a CAGR of 12.10% during the forecast period to reach USD 4.4 billion by 2030.

SOAR is a set of distinct technologies which enables enterprises to gather data and security warnings from various sources. The enterprises perform threat analysis and remediation processes with the help of these software and services together for prioritizing incident response (IR) activities. Using SOAR tools, enterprises can define response procedures and perform threat analysis in a systematic digital workflow format, leading to automation of various machine-driven activities. SOAR combines three technology sectors which were previously categorized as security orchestration and automation, threat intelligence and incident response. Since the number of security professionals is scarce, in the years to come, the enterprises are expected to face an increasing shortage of security professionals. SOAR fills this gap and as a result, enterprises are likely to adopt these solutions in the coming years. The growing digitization leading to increasing vulnerabilities in data security is a major factor which is responsible to drive the market growth. The need for a complete view to manage cyber threats and the need for improving detection and response activities across verticals are other key factors which are driving the global SOAR market. Furthermore, the lack of awareness regarding SOAR is expected to be a restraint for the growth of this market.


Security Orchestration Automation and Response Market Regional Analysis:The global SOAR market is estimated to register a CAGR of 14.6% over the forecast period. The geographic analysis of the global SOAR market has been conducted for North America, Europe, Asia-Pacific, the Middle East & Africa, and South America.

North America has the largest market share as the companies in this region are investing significantly in R&D activities, which has led to the advancement of technologies in security orchestration and automation. The US leads the market in North America due to high adoption of digital transformation to support large volumes of critical data; as a result, the need for SOAR platform is the highest in the country.

Europe is expected to be the second-largest market during the review period due to the rising need among enterprises across verticals and managed security service providers to comply with the regulations imposed by governments. Asia-Pacific is anticipated to be the fastest-growing market in the global SOAR market during the forecast period. The rise in the adoption of SOAR for security incident and response, security orchestration and automation and threat intelligence are the key drivers for the growth of the market in Asia-Pacific.

Security Orchestration Automation and Response Market Competitive Analysis:The global SOAR market is witnessing high growth due to the rise in demand from various verticals such as BFSI and IT and telecommunications. Major players have opted for partnerships and new product development as their key organic growth strategies to enhance their positions in the market and cater to the demands of end-users across verticals. For instance, in February 2018, Splunk acquired Phantom Cyber, a SOAR platform provider, which led to SOAR being embedded into Splunk’s analytics-driven security solution and is also used for IT operations use cases such as infrastructure monitoring, application performance monitoring and troubleshooting. In February 2019, Palo Alto Networks acquired Demisto, a company specializing in SOAR. The acquisition is expected to advance Palo Alto Networks’s ability to deliver automated threat prevention and response for security teams. In August 2019, Resolve Systems acquired FixStream, a leading vendor in AIOps. The acquisition will help Resolve Systems to predict, diagnose, and automate the resolution of complex infrastructure and application issues.

Security Orchestration Automation and Response Market Key Players:The key players in the global SOAR market are identified based on their country of origin, presence across different regions, recent key developments, product diversification, and industry expertise. These include Cisco Systems, Inc. (US), IBM Corporation (US), FireEye Inc. (US), Swimlane, LLC (US), Palo Alto Networks (US), Rapid7 (US), Splunk Inc. (US), LogRhythm, Inc. (US), DFLabs (Italy), ThreatConnect (US), Cyberbit (Israel), CyberSponse (US), D3 Security (US), Ayehu Software Technologies Ltd. (US), and Resolve Systems (US). The key strategies adopted by most of the players are partnerships, agreements, and collaborations.

The other players in the global SOAR market include Tufin (Israel), Exabeam (US), Siemplify (US), ATAR Labs (Europe), EclecticIQ (Netherlands) and Security (US).

What is the projected market size of the global security orchestration automation and response (SOAR) market?

The global market for security orchestration automation and response (SOAR) is estimated to account for a substantial revenue generation of up to USD 4.4 billion by 2030, expanding at a considerable CAGR of 12.10% over the review period (2022-2030).

What are the recent developments from significant market players in the global security orchestration automation and response (SOAR) market?

In 2019, IBM and Everbridge announced a strategic partnership to integrate their products for innovations.

On what basis is the global security orchestration automation and response (SOAR) market’s segmental analysis conducted?

The global SOAR market segmentation is conducted based on component, application, organization size, vertical, and region.

Where is the geographical analysis of the global security orchestration automation and response (SOAR) market carried out?

The regional analysis of the global security orchestration automation and response (SOAR) market is carried out in four major regions, including North America, the Asia Pacific, Europe, and the rest of the world (covering the Middle East and Africa, and Latin America).

Which region is the most productive in the global security orchestration automation and response (SOAR) market?

The report projects the fastest growth in the Asia Pacific, and a steady rise in North America and Europe, wherein North America is slated to witness the largest market share. Furthermore, the rest of the world region is anticipated to observe a gradual market growth over the forecast period.

The SOAR Platform Segment is Expected to Hold the Largest Share in the Global SOAR Market during ...