Please note that the assessment period of report has been updated from 2019−2025 to 2020-2027. Cordially fill the sample form for updated data.

Global Organic Catalyst Market was valued around USD 550 million in 2018, registering a CAGR of over 4.8% during the forecast period. The shift of Individuals towards the principle of green chemistry is expected to boost the global organic catalyst market during the review period.

Catalyst is a substance that increases the speed of a chemical reaction without getting consumed in it. Organic catalyst are the compounds that predominately consist of organic molecules of C, H, O, N, S and P to accelerate the rate of a chemical reaction. Organic catalyst is also known as organocatalyst and the process of increasing the rate of a chemical reaction is referred as organocatalysis. Owing to the advantages such as lack of sensitivity to oxygen and moisture, easy reaction manipulation, low toxicity, low cost and their ready availability, Organic catalyst are preferred in the pharmaceutical and agricultural sector as the materials of choice over other transition metal catalyst. Furthermore, organocatalyst are compatible with several functional group and does not require anhydrous condition, thus reducing the number of reaction steps and the cost of synthesis. Metal organic catalyst consist metal linked to the organic catalyst and since these metals can causing health issues if used for medicinal purposes, thereby manufacturers are using organic chemical catalyst for biological catalysis and moving towards adopting the principles of green chemistry.

Organic catalyst is expected to have an opportunistic market during the forecast period. Due to the use of organocatalysis in green chemistry to innovate technologies that reduce the usage of hazardous substance. Moreover, this branch of science also helps to reduce the environmental impacts as it prevents formation of metallic waste by avoiding the traces of metals in the products owing to which the use of organocatalyst is increasing in medicinal applications.

The organocatalyst have a high catalyst loading which can decreases the enantiomeric excess (ee) of the product thereby, making it less chiral and decreases its use for aldol and proline reactions. 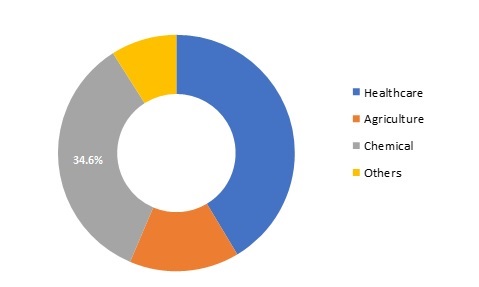 Asia-Pacific region held the largest share for the global organic catalyst market in 2018 and is expected to follow a similar trend during the review period. Owing to the growing chemical industry and strong agriculture industry of the region led by China and trailed by Japan, India and South Korea respectively.

The European market for organic catalyst is expected to register moderate growth during the forecast period. Attributed to the stringent policies set by agencies such as REACH for adoption of green chemistry in their industry is compelling the industrial leaders to shift towards the organic catalyst and thus contributing to the regional market growth.

The Middle East & African market is witnessing slow growth as compared to the other regions. However, the growing pharmaceutical and chemical Industry in countries such the UAE, Saudi Arabia and Qatar are likely to fuel the demand for organic catalyst in the coming years.

The market in Latin America is picking up the pace owing to the expanding agriculture industry in the countries such as Brazil and Argentina, which are expected to fuel the demand for the organic catalyst.

The global organic catalyst market has been segmented based on product type, end-use industry, and region.

By product type, the global market has been classified into by product type enzymes, amines, chiral amides, iminium, carbenes, and others. The enzymes segment held the largest share for the organic catalyst market in 2018 and is expected to be dominant during the forecast period.

On the basis of application, the global market has been categorized into medicines, fertilizers, pesticides, paper & pulp, and others. The medicines segment held the largest share of organic catalyst market.

Based on end-use industry, the global market has been segregated into chemical, agriculture, healthcare, food & beverages, and others. The healthcare industry dominated the global organic catalyst market in 2018 and is expected to remain a dominating industry during the assessment period.

Who are the factors aiding the transformation of the organic catalyst market?

The augmented demand level from the pharmaceutical and agricultural sectors is projected to enhance the market.

What is the CAGR development detected in the organic catalyst market?

A 4.8 % CAGR is estimated to promote market expansion in the coming period.

What is the revenue capacity of the organic catalyst market in the forecast period?

A constructive revenue level is estimated to empower the market.

Which regions are regulating the organic catalyst market?

The APAC regional market is estimated to shape the market in the coming period.

Which influences are stimulating the organic catalyst market?

Organic Catalyst Market: Chemical Industry Is Expected To Witness A Healthy Growth During The For...