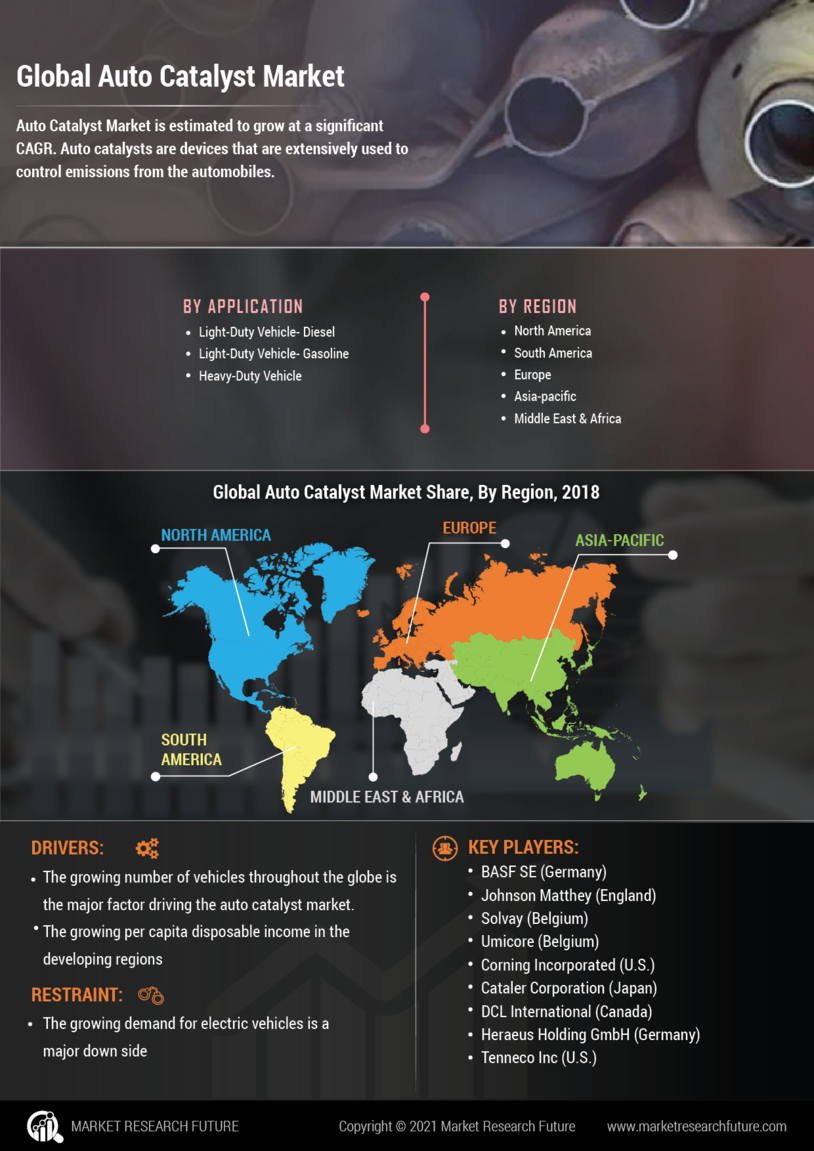 Auto Catalyst Market Size was valued at USD 12.08 billion in 2021. The Auto Catalyst market industry is projected to grow from USD 12.45 Billion in 2022 to USD 18.98 billion by 2030, exhibiting a compound annual growth rate (CAGR) of 5.4% during the forecast period (2022 - 2030). The growing population and the rising per capita income in several developed countries have presented opportunities for a large mass of consumers to invest in sophisticated transport systems are likely to propel the growth of the market. 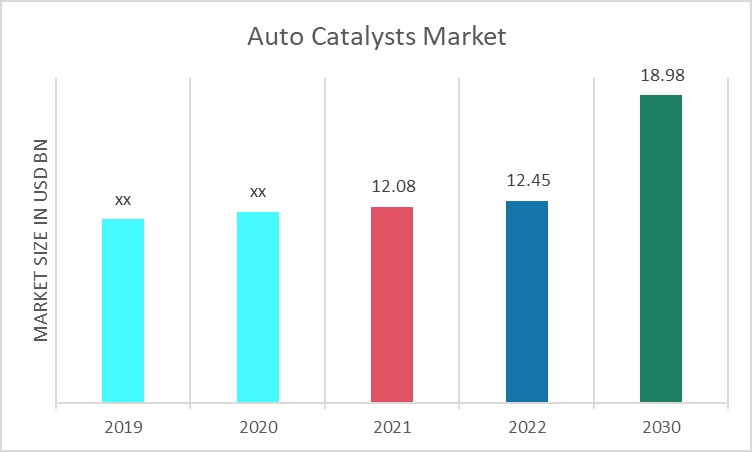 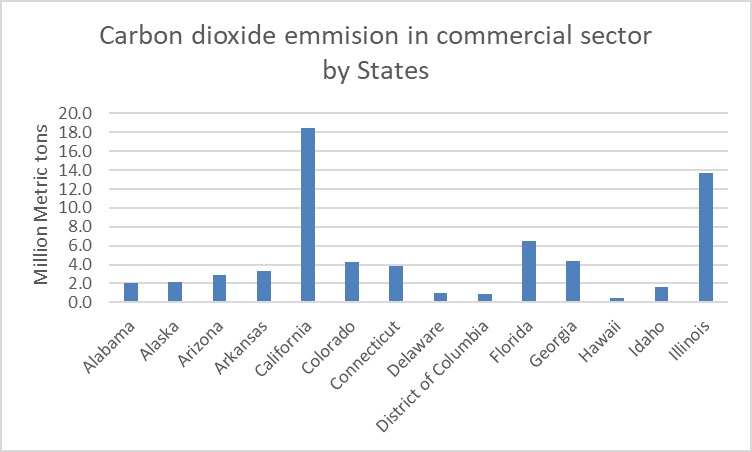 Additionally, Stringent government regulations to restrain pollution surged the demand for automotive catalysts in recent times. For instance, Euro 6d-TEMP was implemented in September 2019, which limits the NOx emission to 85.8mg/km for petrol cars and 114.4mg/km for diesel cars. The demand for Auto Catalyst is also projected to be boosted by governments' growing investments in commercial buildings for infrastructure development in several nations, including Thailand, Indonesia, and Malaysia.

The Auto Catalyst market is projected to expand because of the stringent emission standards implemented by governments across the world. Additionally, Increasing regulations pertaining emission control limits implemented by China's State Environmental Protection Administration (SEPA) to curb vehicular pollution is anticipated to boost the demand for autocatalyst in this region. Moreover, these regulations will limit the use of increased PGMs in the coating of an autocatalyst substrate. This, in turn, is likely to make auto catalyst expensive in the coming years and, therefore, increase market revenue share. Environmental Regulation another factor driving the growth of the Auto Catalyst market revenue.

July 2021: BASF SE has announced the acquisition of Zodiac Enterprises LLC in Caldwell, Texas of United States. With this acquisition, the company has expanded its chemical catalyst recycling capacity and capability. Moreover, the site recycles precious metals from industrial scrap, primarily chemical catalysts. Furthermore, this investment allows the company to meet the increased customer demand for recycling spent chemical and automotive catalysts.

Additionally, Heavy-duty vehicles include trucks, tractors, tankers, buses, and coaches. These vehicles are mostly diesel-powered and require larger Platinum Group Metals (PGM) content to convert harmful exhaust gases into less noxious gases in comparison to other vehicles. Therefore, the price of autocatalysts used in this segment is much higher in contrast to that used in light-duty vehicles. This likely to drive sector growth throughout the projection period.

Based on Application, the Auto Catalyst industry has been segmented light-duty vehicle diesel, light-duty vehicle gasoline, heavy-duty vehicle. light-duty vehicle diesel held the largest segment share in 2021, s. In addition, in North America and Europe and the execution of new rules & regulations governing vehicle emissions in the emerging countries of Asia Pacific are some of the factors projected to augment the auto catalyst market over the forecast period. The increase in per capita ownership of vehicles is another factor, which is expected to boost the demand for autocatalysts. Thus, it is anticipated that during the forecast period, rising stringent regulations of the worldwide Auto Catalyst market, is expected to bolster at a CAGR of 2.91% during the assessed timeline.

The fourth fastest growing segment in the Auto Catalyst industry is rubber & plastics. High grade clays used in rubber, such as ball clay and Auto Catalyst, have a low content of coarse particle defined as greater than 44m. The typical particle size analysis of Auto Catalyst used in rubber is 99.5% less than 44m and between 50% and 97% minus 10m. A higher proportion of coarse particles will reduce the tensile strength and result in premature flex-cracking, the cause of dielectric failure in insulating rubbers. Coarse particles also cause premature wear and tear on mixing machines and extruder dies.

By Region, the study segments the market into North America, Europe, Asia-Pacific and Rest of the World. Asia-pacific Auto Catalyst market accounted for USD 5.78 billion in 2021 and is expected to exhibit an 3.6% CAGR during the study period. This is attributed to increasing automobile production in Asian countries such as India, Indonesia, South Korea, Pakistan, and China owing to the rising population and growing consumer disposable income.

For instance, China Auto Catalyst market for example, Increasing regulations pertaining emission control limits implemented by China's State Environmental Protection Administration (SEPA) to curb vehicular pollution is anticipated to boost the demand for autocatalyst in this region. Moreover, these regulations will limit the use of increased PGMs in the coating of an autocatalyst substrate. This, in turn, is likely to make auto catalyst expensive in the coming years and, therefore, increase market revenue share. Hence, Asia-Pacific is anticipated to register the highest growth rate over the forecast period from 2022–2030.

Major market players are spending a lot of money on R&D to increase their product lines, which will help the Auto Catalyst market grow even more. Market participants are also taking a range of strategic initiatives to grow their worldwide footprint, including new product launches, contractual agreements, mergers and acquisitions, increased investments, and collaboration with other organizations. Competitors in the Auto Catalyst industry must offer cost-effective items to expand and survive in an increasingly competitive and rising market environment.

Also, Umicore (Belgium) is one of the world's leading manufacturer. It is a materials technology and recycling company. Its product portfolio includes thin film products, platinum engineered materials, technical materials, industrial metals, and cobalt and specialty materials, automotive catalysts and organic and inorganic precious-metals-based catalysts, among others. The company also extracts several precious and other metals from various waste streams and industrial residues; and recycles rechargeable batteries. Its products find applications in the automotive, recycling, chemicals, energy, electronics, optics and display, and precious metals industries. The company has operations across Europe, Asia Pacific, North America, South America and Africa.

May 2021: BASF SE has announced the plan to expand the project at its Platinum Group Metals (PGM) refining facility in Seneca, South Carolina, United States to boost the site’s refining capacity for recycled precious metals from spent catalysts, which will further strengthen the company presence in the spent automotive catalyst recycling market, ly.

February 2021: PPG had launched the premium NCP450 and NCX455 ISo-Free catalysts where both effectively eliminated Isocyanates. NCP450 is considered to be ideal for small repairs and offers excellent bare metal adhesion and corrosion protection. The product is engineered carefully with the features such as easier and smoother applications.

May 2021: TFP hydrogen products which is based in the UK had launched tailored catalyst systems for hydrogen generation that have considered the rise in the price of iridium. Since the price of iridium has risen in recent times, have affected the anode catalysts and thereby affected the autocatalysts industry. This invention has effectively addressed the issue as it runs on the combination of iridium and ruthenium for cost-effectiveness.

How much is the Auto Catalyst market?

How Big is the Asia-Pacific Auto Catalyst market?

What is the growth rate of the Auto Catalyst market?

Which region held the largest market share in the Auto Catalyst market?

Who are the key players in the Auto Catalyst market?

Auto Catalyst Market in the light-duty vehicles is estimated to drive the market growth during th...