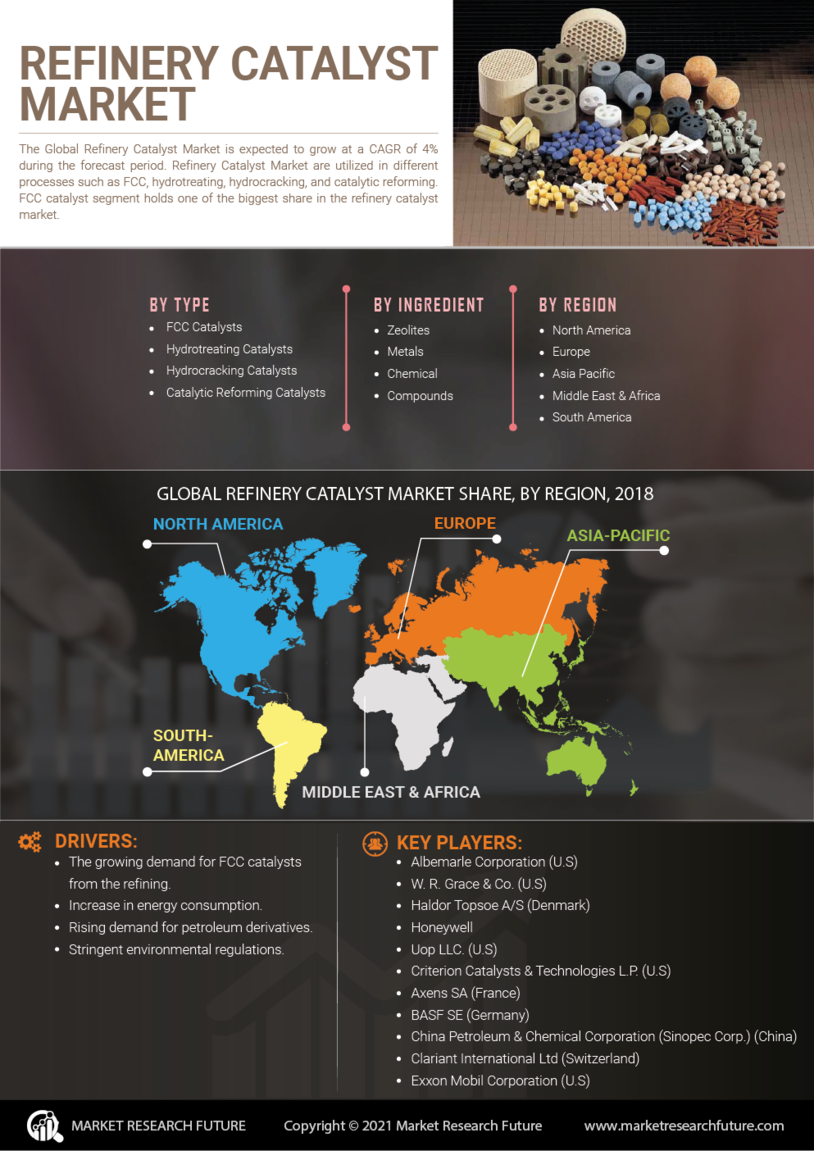 Globally the refinery catalyst market projects at a value of USD 4 billion to USD 5.2 billion during the forecast period of 2020 to 2030. It occupies a CAGR of 2.90% during the forecast period of 2020 to 2030. As per the Environmental Protection Agency, an automobile liberates about 4.6 metric tons of carbon dioxide every year. Average gasoline automobiles comprise a fuel economy of about 22 miles per gallon where you can drive about 11,500 miles per year. Each gallon of gasoline when burned liberates about 8.9kg of carbon dioxide.

The outbreak of COVID has spread to almost every country globally along with the World Health Organisation declaring this pandemic to be a public health emergency. Globally, the impacts of COVID have been felt which in turn will affect the refinery catalyst industry during the forecast period. This pandemic has affected the country leading to the cancellation of flights, quarantining oneself, banning the travels, and closure of various food courts. The production unit of the refinery catalyst was being stopped. Many of the laborers were affected by COVID. The decline in the growth in the supply chain and a decrease in the stock market volatility was marked. Financial issues arose in the industry. The outbreak brought changes in consumer behavior thus making the people more panic.

The government took serious steps on the spread of the coronavirus. He imposed the wearing of masks and use of sanitizers as a strict regulation.


DriversRise in demand for petroleum derivatives pushes up the demand of the market and increases the refinery catalyst market value. Using fuel of high octane number increases the refinery market size. Strict rules and regulations of the environment, use of high-quality refined products, urbanization increases the refinery market size. The use of ultra-low sulfur diesel formed by hydrocracking catalyst increases the market growth. Starting from the drilling of diesel to gasoline consumption, the petroleum fuel industry is expected to project at a high rate.OpportunitiesIncrease in oil production capacities in oil refineries in the developing countries creates growth and size expansion opportunities for the markets. The rise in growth for clean petroleum products and rise in oil and growth-related activities plays an influential role in the expansion of business. The rise in usage of petroleum feedstocks like ethylene, propylene, and butadiene in North American regions increases the opportunity of the refinery catalyst market. ChallengesThe presence of sulfur in these hydrocarbons inhibits its proper usage thus decreasing the demand in the refinery catalyst market. The manufacturers of the catalyst are manufacturing feedstocks instead of hike in petroleum prices are the challenging factor for growth. Decrease in crude oil price and lessen the availability of the resources become a challenging factor for size expansion. The change towards the carbon dioxide driving neutral society urges to be a significant challenging factor for growth.Cumulative GrowthProduction and rise in demand of FCC catalyst from refining increases the growth. An increase in the consumption of energy drives the market. With the rise in the development of the petrochemical industry, the output of waste refinery catalysts has shown growth.RestraintsEmissions that are being done from the vehicles and other industries harm the environment thus becoming a major restraining factor. After regeneration, harms the activity of the catalyst is destroyed which hampers the market growth. Demand for other conventional sources of energy. Disruption of oil reserves acts as a restraining factor for the growth of the industry. Some alternative fuels like carrying out “Go Green” rallies and certain other environmental policies hinder the market growth and decrease the refinery catalyst market value.


By typeRefinery Catalyst Market was classified based on type, application, and region. Based on product, the market is classified into Fcc catalysts, hydrotreating Catalysts, Hydrocracking Catalysts, and Catalytic Reforming Catalysts. FCC catalysts are widely used in the number of vehicles that run on petrol due to which demand for petrol throughout the world is at a hiking price. FCC catalyst is used for the conversion of crude oil to petrol. Based on order type, the market is Nickel, Molybdenum, Ferro-Vanadium, Precious metals, and many more. Regionally, the market segmentation takes place based on Asia-Pacific, European region, North America, South America, Middle East, and African regions.By technologyAdvancement of technology led to the development of new environmental regulations which reduces air pollution by lessening the amount of sulfur content in the gas and ultra-low sulfur content in diesel. The innovative refinery catalyst so launched is helpful in the process of petroleum treatment. The refinery catalyst increased the efficiency of the hydrocarbons. The yield and conversion of hydrocarbon are enhanced without having any adverse effect on the environment. Technology led to the discovery of certain metals like nickel, tungsten, cobalt, and molybdenum. After this metal was used for hydrocracking and hydrotreating processes for removing the impurities and lessening the emission from these hydrocarbons. Development of new resources with special characteristics helped in meeting the growing demand of the market


These players carry out different growth strategies that will help in the expansion of the market. It gives information about the market features so adopted to improve the market insight.


November 2021: BASF unveiled plans to sell its kaolin clay operations in Georgia to minerals supplier KaMin. The company employs 440 people and generates approximately USD 175 million in annual sales of kaolin, which is used in ceramics, paper, and as a filler. BASF's refinery catalyst business, which is located alongside the kaolin operations, is not included in the transaction. BASF agreed to sell its electronic chemical business to Entegris for USD 90 million earlier this month. Additionally, BASF recently sold its joint venture with Platinum Equity, Solenis, for USD 5.25 billion.R.Grace on June 1, 2021, completed its partnership with Albemarle Corporation's Fine Chemistry services where the refinery catalyst market value occupied a business of USD 570 million.Air Products on May 15, 2020, acquired acquisition with Haldor Topsoe.In 2020, BASF launched a new FCC catalyst called Fortune which was used for gas-oil feedstock. Based on BASF’s multiple framework topologies developed the catalyst which delivers butylene over propylene helps in maintaining the activity of the catalyst.In 2019, Sinopec the most renounceable company worked on the AL-Zout refinery contract in Kuwait. The refinery emits 3,150 tons of oil which rises the demand for oil refineries.Honeywell in 2019, made a partnership with Integrated Petroleum Industries Company which supplied refinery catalyst for refining purposes. This acquisition will be helpful in the plant’s output capacity of petrol and gallons of diesel.In June 2019, ExxonMobil extended this company to its Singapore refinery where the production of refinery catalysts was increased.

Which segment is said to be the largest segment?

The zeolite ingredient segment is the dominant and largest segment. Zeolites are more preferably used in the FCC process. It is hugely advantageous due to it available at a reasonable price along with its other beneficial properties which increases the growth of the refinery market. Zeolites act as good adsorbents increasing the surface area and increasing its porosity. Due to the porous nature of zeolites and accommodation of carbon within it takes place.

Give notes about some other acquisitions and partnerships?

On 17 January 2020, Clariant merged with Polymateria and Central Institute of Plastic Engineering and Technology and developed new plastic biodegradation which helped in market growth.

Give short notes about the rise in growth in the North American region?

North America is said to be the dominant and largest region after Asia- Pacific. It is so because the refinery catalyst companies are investigating huge sums in research and development of the industry at a high rate as per the technology and rise in demand partnerships.