The global emission control catalyst market was valued at USD 12.36 billion in 2018 and is expected to register a CAGR of around 10.50% during the forecast period, 2022-2030. ECCs are utilized to breakdown the toxic gases and pollutants released from the fumes of the exhaust system of an automotive or any industrial machinery to discharge minimum harmful contaminants in the environment. Moreover, the properties of catalysts like low maintenance and insignificant opposing effect towards engines and fuel have increased its demand in the market. Furthermore, the increasing concern over the toxic gas and pollutants released from the automotive and industrial segments such as HC (a product of burned or half-burned fuel), CO (a product of incomplete combustion), NOx (produced of air and oxygen at high temperature and pressure), SOx ( produced if fuel contains sulfur), soot, volatile organic compounds (VOCs), and escalating environmental issues to control the emission of these pollutants compels the automakers and industrialists to add certain measures to check their emissions by embedding the engines with emission control devices such as catalytic converters. This, in turn, would fuel the growth of the emission control catalyst market. Moreover, the soaring globalization giving rise to the growth of the industrial and automotive sector is another reason propelling the growth of the global ECC market. The lack of technical expertise in some regions is challenging in the growth of the global emission control catalyst.   Global emission control catalyst Market Share, by End-Use Industry, 2018 (%) 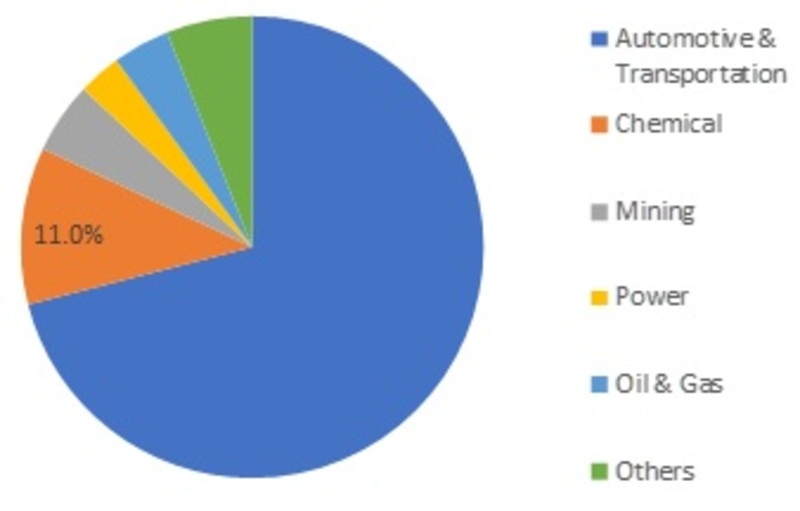 Source: MRFR Analysis Segmentation The global emission control catalyst market has been bifurcated based on type, end-use industry, and region. By type, the global emission control catalyst market has been classified as palladium, platinum, rhodium, and others. Among which the palladium segment is expected to be the largest and the fastest-growing during the forecast period owing to its properties controlling the emission of hydrocarbons, followed by platinum and rhodium which keeps in check the emission of COx and NOx. Based on end-use industry, the global emission control catalyst market has been segregated into automotive & transportation, chemical industry, oil & gas industry, mining industry, power industry, and others. The automotive and transportation segment contributes most substantially to the global emission control catalyst attributing to a large number of vehicles on the road. Regional Analysis North America, Europe, Asia-Pacific, Latin America, and Middle East & Africa are the region analyzed under the scope of the market. Europe held the largest share in the global emission control catalyst market in 2018, because of its growing automotive & transportation sector. And the government policies for strict environmental regulations have stimulated the automakers to incline towards devices reducing the pollutants emissions and catalyst being the best alternative for this, has surged the demand for producing more catalytic converter in the market thus, adding to the overall demand for ECC in the regional market. The North America region has a prominent share in the ECC market owing to their widely spread industries in chemical, oil & gas and power which have significant emission rate of pollutants contradiction the environment regulations set by the government which further compels the industrialists to adopts the usage of the ECC in there exhaust delivery which absorbs the pollutants. Moreover, the R&D is testing, designing, and learning new ways to improve the catalytic systems to meet up with new emission standards getting stringent with each passing day because of the escalating global warming. The Asia-Pacific region has a promising market for ECC during the forecast period attributing to the fact that there is an increase in the automotive sales and governmental programs for economic development encouraging the countries to spread industrialization in the region due to its continuously growing population. Furthermore, the government implementing strict policies for pollution control leading to high requirement of EEC in the regional market. The Middle East & Africa is evaluated to observe a consistent development over the appraisal time frame, because of the robust mining industries and oil borne areas are the key factors driving the regional market growth. Latin America is expected to have a poised growth for the ECC market during its increasing automotive sector. Key Players Some of the key players operating in the global emission control catalyst market are BASF SE (Germany), Johnson Matthey (UK), Solvay (Belgium), Umicore (Belgium), Corning Incorporated (US), Clariant (Switzerland), aerinox-inc. (US), CORMETECH (US), Cataler Corporation (Japan), DCL International Inc. (US), Tenneco Inc. (US), KATCON Global (US), Eastern Manufacturing Inc. (US), Bastuck (Germany), and Bosal (Netherlands). Intended Audience:

What was the emission control catalyst (ECC) market valuation in 2018?

What is the expected CAGR for the Emission Control Catalyst (ECC) Market during the forecast period of 2022-2030?

What are the end users involved in the Emission Control Catalyst (ECC) Market?

End users like the chemical industry, automotive & transportation, mining industry, power industry, oil & gas industry, and others are involved in the market.

Europe is in charge of the global market.