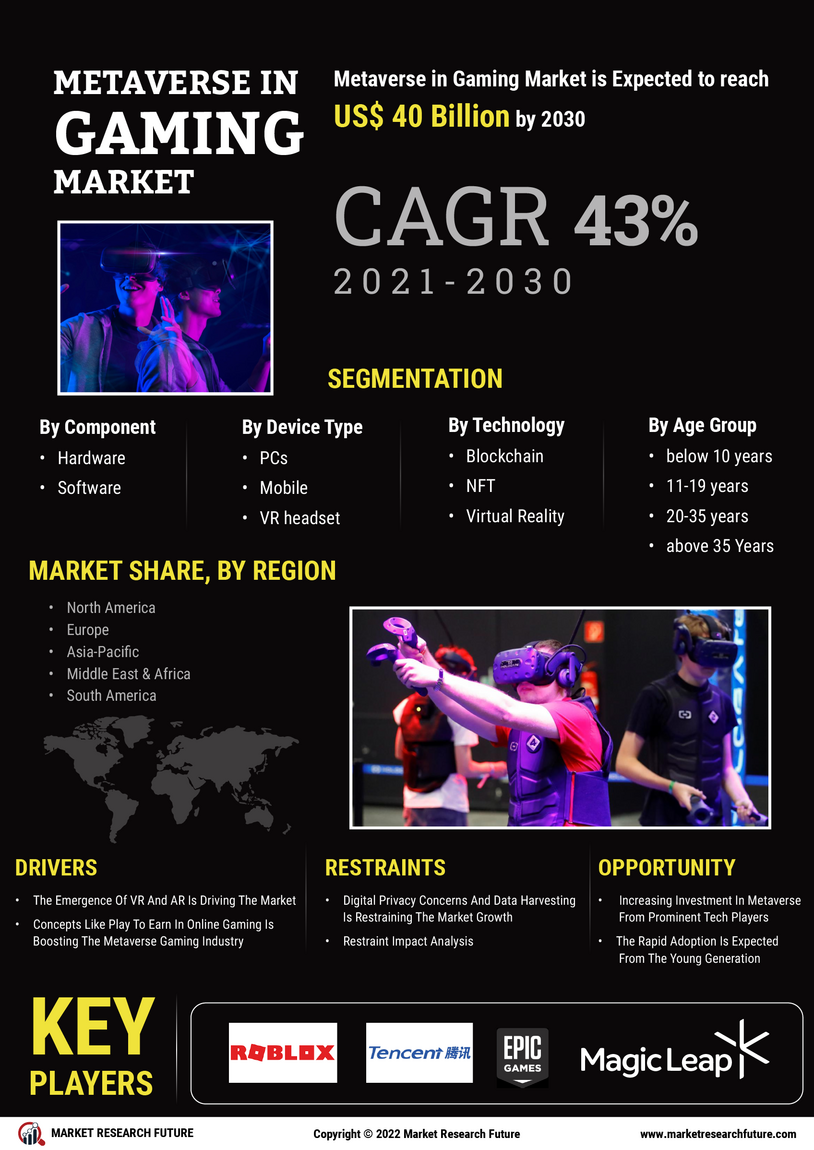 Metaverse in Gaming Market is Expected to reach US$ 40 Billion by 2030 with 43% CAGR.
Request a Free Sample

Metaverse in Gaming Market is Expected to surpass USD 40 Billion by 2030 with 43% CAGR.Metaverse is a digital platform in a combination of virtual reality in a physical realm. Individuals and game developing companies are eventually connected with each other by a mode of technology known to be blockchain. The popularity of blockchain in assisting a wide platform in the development of gaming world is gaining immense popularity. Moreover, metaverse is an iconic open world in virtual reality that is offering various options to the online gaming platform in the development of VR & AR-related games.

Preferably, companies like Apple, have started research and development programs on metaverse projects that will blend virtual reality and augmented reality to bring a headset that is expected to cost around USD 3000. In addition, Meta has also announced an investment of USD 10 billion over the coming years to develop metaverse technologies. Such investments will provide a boost to the online gaming industry in the near future.


With the introduction of VR and AR, the gaming industry has witnessed a sudden boost in its gaming platforms. Technological advancement in projecting the virtual world in a quite defining way and making the users feel an unexceptional experience is setting new trends for the growth of the gaming industry. For instance, Meta did revolutionary technological advancements in its Virtual Reality subsidiary known as Oculus. The company is estimated to sell around ten million units of Quest 2 headsets across the globe since October 2020. Meta is, therefore, ready to introduce new games and non-gaming capabilities for the metaverse. Also, Meta is partnering with some of the most popular Virtual Reality game developers like Downpour Interactive, BigBox and Beat Games in order to grab the Metaverse in Gaming Market opportunities.

In addition, features like captive experience due to the increase in demand for online gaming and smooth user experience in an inability to differentiate between virtual and actual environment is anticipated to drive the metaverse gaming industry. Furthermore, functionalities like addition of digital data and real-time information into a single platform are expected to be pushing the Metaverse Platform for Gameing Market growth.

The perception of online gaming is changing rapidly, with the profit of earning NFT (Non-Fungible Tokens) is giving a boost to the metaverse gaming industry. The current online gaming scenario has completely changed with the introduction of blockchain technology that has been allowing the players to invest and earn leveraging huge profits. The interest in playing online games is moving towards a new path, owing to the release of new gaming platforms and opportunities to earn profits from them. In such conditions, it is quite interesting to witness capital ventures investing a lot of money in the development of gaming platforms that are garnering a huge population to play online games. For instance, it is estimated that the global gaming industry has witnessed a flow of nearly USD 9.6 billion during past 18 months has been attributed to the growth of metaverse gaming industry.  Also, according to Cointelegraph, there has been a contribution of more than USD 476 million of investment by the blockchain companies during the first quarter of 2021 has further boosted the growth of the Metaverse in Gaming Market.


The rise of a metaverse in gaming and its compatible technologies are raising concerns related to certain digital privacy concerns. According to Electronic Frontier Foundation (EFF), the privacy concern is related to the location tracking of an individual where the data collected by the AR glasses is expected to reveal the user location. Further, facial technology being used during the process is expected to get shared with private and government agencies, which is a grieving concern.

In addition, wearable metaverse tech are expected to collect forms of user data that are personal to users. Both AR and VR technology has high possibility of collecting data by means of eye tracking sensors which are subjected to hinder the privacy of an individual. Moreover, wearable devices are able to collect the biometric data from nearby surrounding thus hampering the privacy of nearby individuals too. Considering the above-mentioned conditions, the technological advancement in AR and VR is anticipated to hamper the growth of Metaverse in Gaming Market.


Neuralink is one of the most promising technologies that is anticipated to boom in the near future, owing to its capabilities that will allow the users to initiate or perform a task through brain signals.  For instance, Neuralink has recently conducted a test on a macaque monkey named Pager who is fitted with a Neuralink chip on each side of the brain is now successfully able to play pong games with the help of calibrated brain signals. Neuralink technology being integrated with VR headsets is expected to bring a revolutionary change that will allow the users to have a more realistic experience and ease of playing games.

The global metaverse in gaming market has witnessed significant growth in the past few years due to technological changes and is expected to grow at a significant rate in the upcoming years. The value chain analysis of the metaverse in gaming market comprises four major levels: hardware/software providers, cloud vendors/service providers, system integrators, and end users

The global metaverse in gaming market has been segmented based on component, device type, technology, age group, and region.


Metaverse in Gaming Market By component type, the market of metaverse in the gaming industry is expected to witness promising updates in terms of hardware like camera, GPU, and others. Whereas, in terms of software like Unity. It is estimated that more than 2.5 billion users play games powered by Unity. Furthermore, software like Stardust is also playing an important role in providing a platform to the metaverse.

Metaverse in Gaming Market By device type, the metaverse games can be experienced in traditional platforms like PCs and mobiles. Other than this, the advancement in technology has bought attention to VR’s headsets that are able to provide a different user experience to users.

Metaverse in Gaming Market By technology type, blockchain is gaining immense popularity owing to its decentralized nature and being a mode of secure connection. However, extensive use of NFT for sales and purchase activities is propelling the market growth.

Metaverse in Gaming Market By age group, different age population is involved in online gaming and age is no bar to the individuals who like to earn while playing is boosting the market growth for metaverse in gaming industry.

On regional basis the global metaverse in gaming market is classified as North America, Europe, the Asia-Pacific, the Middle East & Africa, and South America. With the presence of major IT giants such as Google, NVIDIA, Microsoft, and others have a contributing approach in the development of metaverse. In addition, acceptance of blockchain technology at a greater level is considered as a key factor for North America being a dominating region. Furthermore, gaining popularity of games like Beat Saber, Pistol Whip, Population: One, and others based on metaverse is influencing the market growth of metaverse in the North America gaming industry. Rest of the regions, like Europe, Asia-Pacific are projected to grow gradually owing to the vast population and acceptance of blockchain technology is expected to drive the Metaverse in Gaming Market growth.

Covid-19 has an unprecedented impact on the lives of people. A sudden break of pandemic has caused an adoption of strict rules by the government thus imposing restrictions on the movement. Such scenario has bound the individuals to restrict themselves within the confined boundaries thus forcing on certain activities to keep them motivated. Prior to Covid-19, the gaming market is estimated to have generated revenue of USD 120 billion on video games that doesn’t includes hardware. The revenue generated is anticipated to be three times more than the global box office revenue. Games like MInecraft, Roblox, and Grand Theft Auto was estimated to have 70-120 million monthly active players that has generated around 1.5 billion of hours of playtime per month.

Whereas, according to Verizon, Covid-19 has led to a spike in internet traffic during the period. For instance, a rise of 12% was witnessed in digital video traffic coupled with a growth of 20% in web traffic. In addition, video gaming platform has shown a surge of 20% during the same period. Furthermore, with the release of Half Life: Alyx, in the year 2020, 23rd March, have attracted a large volume of gaming population. Accordingly, it can be concluded that Covid-19 impact on gaming industry had less impact than thought.

The global market for metaverse in gaming has witnessed significant growth over the forecast period due to the growing number of players. There are several domestic, regional, and global players operating in the metaverse market who continuously strive to gain a significant share of the overall market. The key market participants are investing in research & development activities to drive organic growth and increase their market shares.


The global metaverse market is characterized by the presence of several regional and local providers. Some of the key players in the market are Roblox Corporation, Facebook, Inc, Tencent Holdings Ltd, Epic Games, Inc, Lilith Games.


Metaverse in Gaming Market Report OverviewThis study estimates revenue growth at global, regional, and country levels and offers an overview of the latest developments in each of the sub-sectors from 2021 to 2030. For this analysis, MRFR segmented the global Metaverse in Gaming market has based on component, technology, application, end user, and region/country.

Which region can dominate the global Metaverse in Gaming market in 2030?

The North America region is expected to be a dominant region in Metaverse in Gaming market in 2030.

Which technology will be lucrative in the global Metaverse in Gaming market by 2030?

The blockchain segment is expected to be lucrative for the market during the forecast period.

Who are the key companies of the global Metaverse in Gaming market?