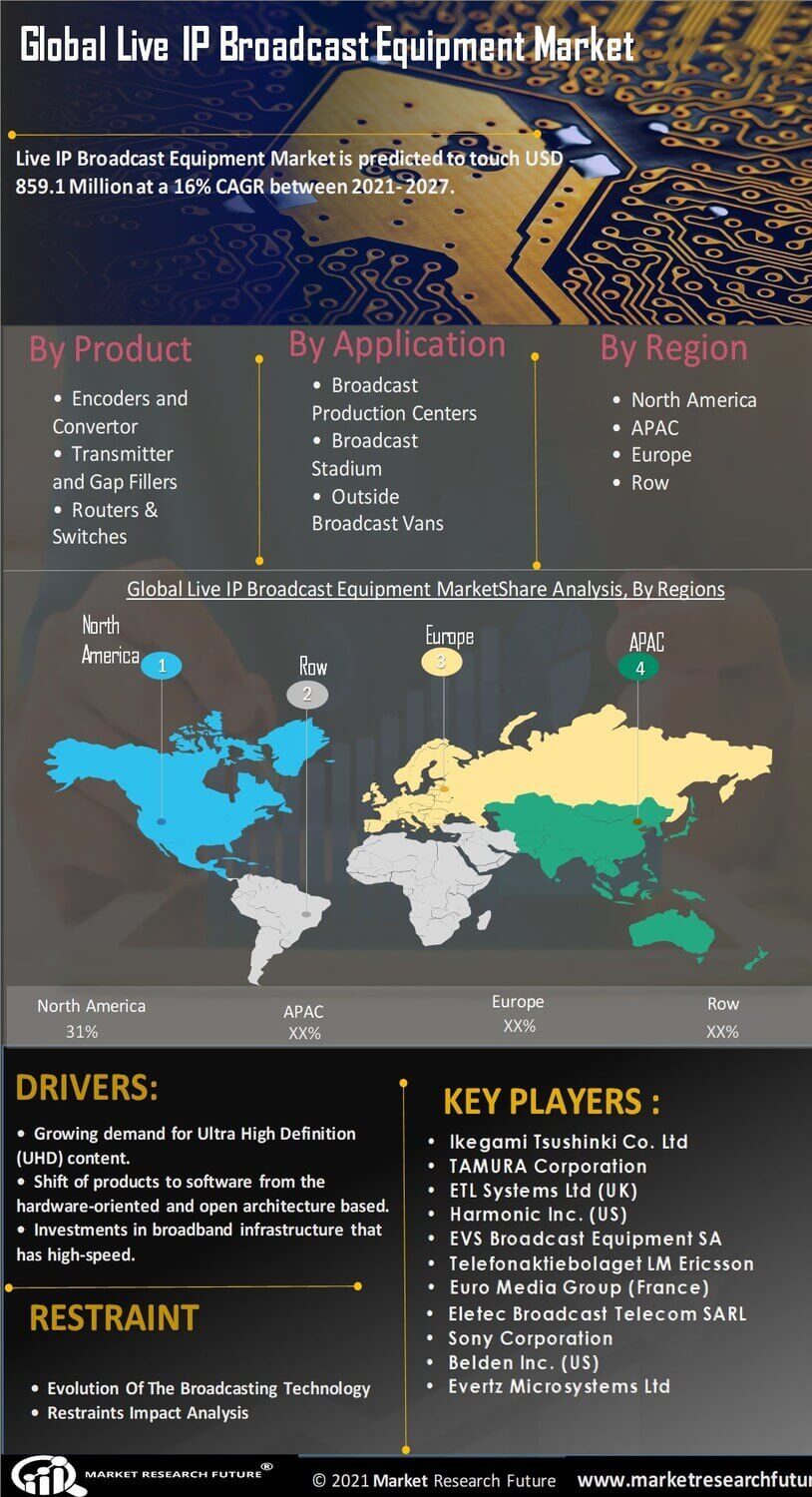 The Live IP broadcast equipment was the primary requirement to stream the live IP video contents with higher quality and reduced latencies. The SDI has been utilized by the broadcasters to broadcast the videos, which is not compatible with the higher quality video content. Therefore the media and entertainment sectors are largely transforming to IP technologies to meet the customer demand. The development in digitalization and the booming IT infrastructure are considered as the major market drivers of the Live IP broadcast equipment market. Moreover, the potential benefits of the IP equipment which enables the user to build connectivity, and better control and reliability are fuelling the overall growth of the Live IP broadcast equipment market. Live IP Broadcast Equipment Market is predicted to touch USD 859.1 Million at a 16% CAGR between 2021- 2027, reveals the latest Market Research Future’s (MRFR) forecast report.

The pandemic has affected several industrial and manufacturing sectors across the globe, where the priority was given to the health crisis and the health care segment was increasing in demand thorough out the pandemic. The manufacturing hubs for electronic components were reducing their production activities in the Asia-pacific region due to the pandemic, which has affected the growth of the Live IP Broadcast equipment market. The hardware manufacturers of the broadcasters were also facing issues such as supply chains and production-related disruptions. The suppliers of the hardware equipment were increasing their marketing tactics to combat the loss incurred during the pandemic. Additionally, the declining economic condition in several countries has also caused severe financial pressure that restricted the companies from investing in media technologies. Therefore these factors have negatively affected the overall growth of the Live IP broadcast equipment industry.

The increasing demand for higher quality content such as 4K, 8K, and UHD content in several business sectors, including media and entertainment businesses, and an increasing shift from the hardware-oriented to the software were some of the primary drivers of Live IP Broadcast equipment market growth.


The potential benefits of the IP equipment over the existing SDI such as easier connectivity, better control over high-end systems, better access to the next-level live event productions from the Remote camera crew and the multi-display station over LAN or Private WAN are presenting lucrative opportunities for the overall growth of Live IP Broadcast Equipment Industry.

With the wide range of Live IP equipment such as transmitters, oscillators, modulators, amplifiers, antennas, repeaters, the reliable and quality contents are getting transmitted according to the demand of the consumers. For instance, the repeaters are used to broadcast the signal, amplify and retransmit the signal which is used in extending the original signal. The availability of this efficient equipment and the increasing content volumes are presenting lucrative opportunities for the overall growth of the Live IP Broadcast Equipment Industry.


The budget limitations are considered the biggest challenge for the overall growth of the Live IP broadcast equipment market. Moreover, the declining economic conditions of several countries are adding to the problem

On the other hand, the lack of skilled professionals in the market regarding IP or Cloud knowledge is hindering the overall growth of the Live IP broadcast equipment market for the faster transition to the IP infrastructure.

The Growth of the Live IP broadcast equipment market is negatively influenced by the strict regulations and the rules imposed by the governmental organization, related to the ownership of the copyright and how the video is transmitted and distributed were considered as the primary challenges in some countries such as Nigeria.


To attain the lower latency levels, the broadcasters carry out some strategies which include, selecting an efficient video transport protocol that helps in delivering the higher quality video with much lesser noise while the video is being transported over the public networks. Additionally, some of the error correction formats were carried out in preventing packet loss. Some of the packet loss recovery approaches were introduced to the infrastructure to reduce the latency, for instance, the Secure Reliable Transport protocol is integrated to leverage the ARQ error correction that helps in preventing the package loss. In recent times, the SRT and Haivision streaming technologies were deployed for broadcasting sports events with the aid of decentralized production technologies.

On the other hand, one of the leading market players, Fox sports have joined hands with Haivision and utilized their video encoders, decoders, and their SRT gateway across multiple production facilities. Such factors have increased the Live IP broadcast Equipment market growth in recent times. The market value of Live IP broadcast Equipment is expected to surpass USD 859.1 Million at a 16% CAGR between 2021- 2027.


The growing demand for the UHD and several other higher quality requirements without latency or minimal latencies are considered as the major drivers of the Live IP broadcast equipment market. In recent years, broadcasting are utilizing the software-based infrastructure

which highly facilitates the reconfiguration and offers higher flexibility upon need, and is capable of producing a huge amount of content under minimal time. This software base infrastructure helps in resource optimization and allows the user to manage the resources upon need as well. Some of the software modules utilized are streaming, embedding, video and audio processing, and monitoring.


Based on Types of Broadcasting:

On the other hand, the Asia-pacific region is also witnessing growth at a faster pace in recent times, owing to the increasing number of manufacturing hubs for the electronic component, which are intensively involved in adopting the advanced technologies. Moreover, the entertainment and media segments are surging in the countries like China, Japan, and India and the consumer base for the higher quality media are also impacting the Live IP broadcast equipment market growth in the Asia-pacific region.

In the year 2018, one of the leading market players, New Teck, Inc. has launched the software-driven Live IP broadcast production system which is named as New Tek IP series, which provides unlimited access to the video sources and enables video mixing options. The system also allows the user to integrate the existing resources with the future resources without any issue via an interconnected production workflow.

In the year 2020, the Federal Aviation Administration has approved that the drones which are weighing over 0.55 pounds will feature broadcasting equipment in them and it will send signals with information such as the operator’s location, altitude, speed, and unique identification number.

Which key region is expected to lead the market of live IP broadcast equipment?

Who are the key players in this market?

What CAGR is expected to register for the Live IP Broadcast Equipment Market?

Live IP Broadcast Equipment Market is going to register a 17.92% CAGR in the assessment period.

Live IP Broadcast Equipment Market is Expected to Attain an Outstanding Growth at a CAGR of 17.92...