The term ‘broadcasting’ refers to distribution of same content to multiple users simultaneously over a network. For instance, say LTE broadcast technology that enables distribute single stream of data to all the end-users connected to its network. 3GPP (or 3rd Generation Partnership Project [3GPP]) has developed a number of protocols for mobile communications among one of them is evolved Multimedia Broadcast Multicast Service (eMBMS) standard for video broadcast over the mobile networks.

5G or Fifth Generation of wireless standard that enables connecting everything everywhere, catering to the ever rising demand for rapid digitization and faster data transmission. 5G enables connect car, home, office, and communicate across the city with upto 100 times faster data transmission speeds when compared to its predecessor- 4G, which was meant for mobile broadband services. Additionally, the 5G wireless technology is expected to support over a million devices in an area of 1 sq. km. much higher than 4G.With the evolution of this technology, broadcasting was one of the earliest identified end-use application of 5G. 5G is expected to generate new streams of revenue such as new broadcast and multicast capabilities.

Several factors contributing to the growth of LTE & 5G Broadcast market comprise of benefits offered by LTE & 5G broadcast infrastructure such as delivery of bulk volumes of data services, mission critical exchange of information, device software update or configuration, among others that enable users and providers share and enjoy same content at the same moment.

The global LTE & 5G broadcast market has been segmented based on technology, end-use, and region.

By technology, the global LTE & 5G broadcast markethas been divided into LTE broadcast and 5G broadcast. LTE broadcast technology is based on the 3GPP or also called as evolved Multimedia Broadcast Multicast Service (eMBMS) standard (a global standard for video broadcast over a mobile network). A specified spectrum is allocated to broadcast operators to cast specific content delivering mission critical communication, device updates, music/audio broadcasting, public safety information, and other applications. On the other hand, 5G broadcast promises to cater new broadcast and multicast abilities such as in-moving car experience through media & entertainment, OTA updates, navigation, live streaming of commerce & online learning content, and so on.

North America is expected to be the dominating region in terms of the adoption of LTE & 5G broadcast technology owing to the heavy investments across the end-use applications including Video on Demand, Mobile TV, Stadiums, Radio, Emergency Alerts, and so on. For instance, ENENSYS Technologies (France) has partnered with Edge Networks to provide innovative hybrid over-the-air NEXTGEN TV services in the region. North American market has been segmented into the US, Canada, and Mexico.The US is expected to lead the country-level market, while Canada is projected to be the fastest-growing segment during the forecast period. The US market is expected to report the highest market share, owing to the leading market position in terms of 5G broadcast networks deployed for various end-uses especially data feeds & notifications, connected cars, mobile TV, emergency alerts, stadiums, radio, among others. Additionally, the North American market for LTE & 5G broadcast is expected to grow further due to presence of key players in the region such asQualcomm Technologies, Inc. (US), Cisco Systems, Inc. (US), AT&T (US), Intel Corporation (US), and Rohde & Schwarz (US). These players are competing to deliver with advanced LTE & 5G broadcast solutions that are future ready, capable of connecting millions of devices, enhanced network coverage, bring new revenue streams for operators, among others.

Asia-Pacificregion is projected to grow at the fastest rate over the forecast period, with the regional market being segmented into China, Japan, India, and the rest of Asia-Pacific. This growth is attributed to the rapid economic developments, expanding telecom industry, allocation of dedicated spectrums for 5G broadcasting, rise in use of smartphones, rapid development across OTT platforms, rise in demand for in-car connectivity, and digital innovation in major countries including China, Japan, India, Singapore, Malaysia, Australia, among others.

The outbreak of COVID-19 has resulted into several disruptions in the LTE &5G broadcast industry across the globe affecting financials losses due to postponement or cancellation of major sports events and live concerts, delays in spectrum allocations, production & deployment delays,supply chain disruption, among others. On the otherhand, the online video content consumption during the initial days of pandemic from Dec-2019 to Mar-2020, there was a high demand reported across this industry.Government agencies used existing LTE & 5G broadcasting infrastructurefor sharing several critical information regarding the pandemic situation and mission-cirtical needs. With pandemic situation, the investments dipped, deployment of 5G broadcast infrastructre delayed or cancelled for indefinite time, spectrum allocation from government’s end was hold until next updates, and others.

On 2nd of March 2021, China Broadcasting Netowrk Corporation Ltd. (CBN), Ericsson, and UNISOC announced their partnership as well as successful completion of testing the interoperability over the 3GPP standards and terminal enhancements on 700MHz band n28.

On January10th, 2021, ENENSYS Technologies, a designer and manufacturer of innovative professional equipment and software, revealed their acquisition of Expway, strengthening their 5G broadcast portfolio. 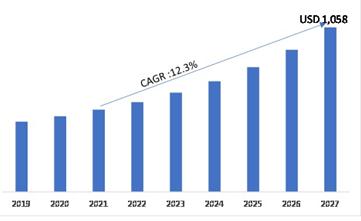 What is the projected size of the LTE & 5G broadcast market by 2027?

What is the expected growth rate of the global LTE & 5G broadcast market?

What is the major driver of the global LTE & 5G broadcast market?

Several factors driving the growth of the LTE & 5G broadcast market include the benefits provided by LTE & 5G broadcast infrastructure, such as the delivery of large volumes of data services, mission critical information exchange, device software update or configuration, and others that allow users and providers to share and enjoy the same content at the same time.

Which region is expected to be profitable in the global LTE & 5G broadcast market?

North America will capture the largest market share during the forecast period.

Who are the prominent players of the LTE & 5G broadcast market?