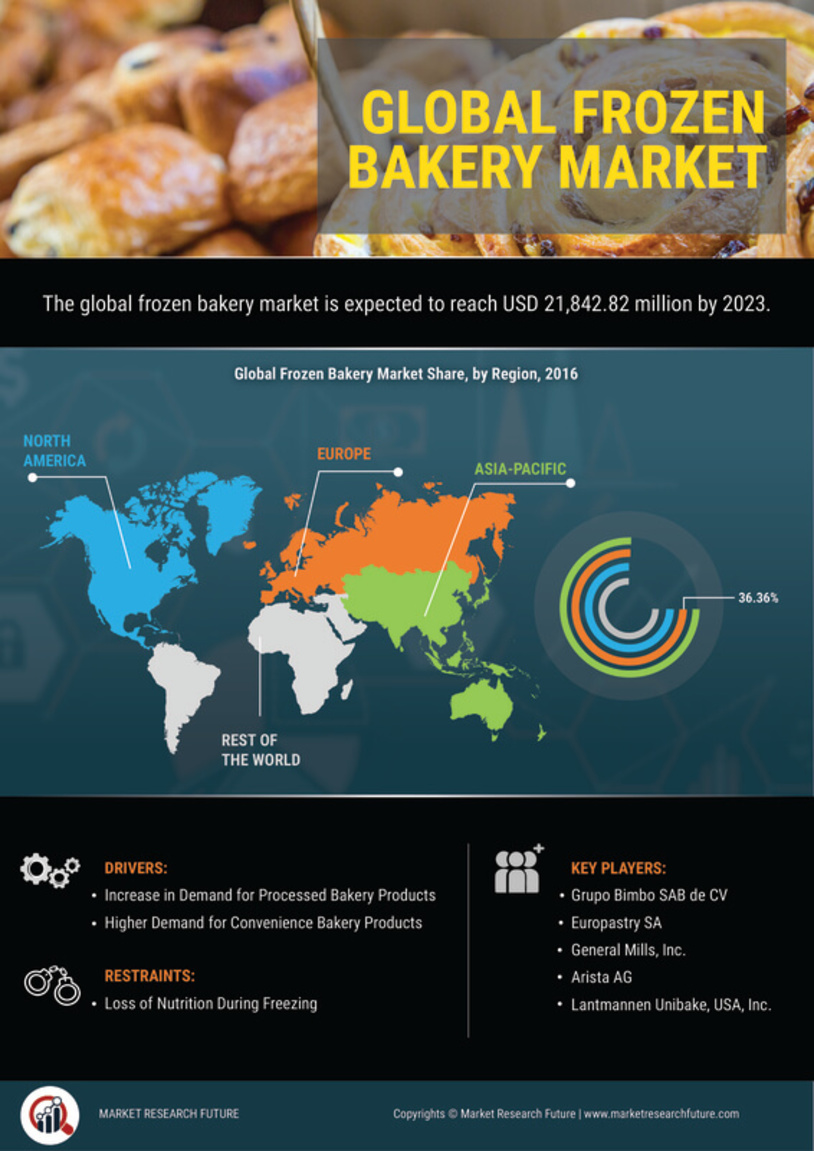 The remarkable growth in the market contributes to the rise in demand for food convenience and the presence of frozen bakery products among the population. In some of the regional markets of the North American region, some of Asia [pacific and some of the Middle East and African region. Following a new frozen bakery market trend, nowadays it has been marked that the scratch baking has been substituted by the frozen bakery. This thus owes to upsurging the market demand for the use of bakery products throughout the world. The frozen bakery market has become a remarkable part of the daily diet throughout the world.

The outbreak of the COVID led to the tremendous hindering of industrial growth. The supply chain of the frozen products was disrupted whereas there was a change in consumer preferences. The labor forces seriously faced several issues. Trade movements were affected whereas e-commerce trade has deteriorated. Export and import business within the country and between other countries has deteriorated.

The rise in the number of retail channels and increase in the number of online retailing supply chains drives up the frozen bakery market size. An increase in disposable income and the growth in health awareness expand the business. The increase in demand for adopting convenient and healthy foods and reduction in marketing trend of scratch baking products have helped in developing the frozen bakery market size. The rise in economies in the Indo-Chinese region has raised the opportunities which have helped in emerging growth. The rise in consumer preferences towards adopting more frozen products encourages up market growth. The presence of processed food steers up the growth. The presence of the fastest-growing households in the urban areas drives up the demand of the market. The presence of per capita income among the population, and the rise in the marketing trend of snacking in between the meal hour are the marketing factors that raise the demand. The industry requires less labor thus driving up the industrial demand.

Some of the key vendors active in the bakery industries receive new opportunities during recent years which thus owes to rising market demand in the emerging countries during the present period. This helps in rising the frozen bakery market growth. Thus, the demand for premium quality products rises thus carrying out the differentiation of the product. He helps in increasing market opportunities. Especially in the European regions, the users have adopted certain lifestyles which helped in the size expansion of the bakery industry. Growth in the industry takes place due to the adoption of new products that would help in catering to the size expansion.

Challenges are often faced by the frozen bakery market players. These challenges are often affected by the inability to reach the user base, especially in underdeveloped regions. The growth in this region faces such conditions due to the presence of a lack of highly settled distribution network systems along with the lack of proper transportation facilities. Improper refrigeration and transportation facilities are the major factor for the improper supply chain market. Some of the emerging countries have deficit infrastructural transportation which is not well connected. The network links are not well connected whereas this limits the route. Insufficient capacity and lessening in quality of the infrastructure add on the expenses and the time is taken for transition.

Moreover, some of the important factors like the rise in the volatility of the raw materials and giving high priority to conventional bakery products within the buyers restrict up the frozen bakery market growth and thus reduces the frozen bakery market size. Some people believe that the food products so manufactured some years before may not be nutritious. For this reason, the preference for freshly baked products rises and demand for frozen products decreases. Consumers also have the perception that the nutritive value of the food products decreases when refrigerated, this restraints the market value. Maintaining a constant temperature for frozen foods is quite difficult due to the presence of certain inefficient supply chains in emerging countries. This projects to be the restraining factor for the growth.

Microencapsulation is the new technology-based procedure that helps the supply chain for raising the shelf life of the products and makes that product gluten-free. Moreover, this technology helps in overcoming the consistency of the refrigerated food product, increasing up the crustiness of the pizza, along with raising the selflessness of the dough both refrigerated and frozen, a dough of frozen biscuit, frozen muffins, and other biscuits.

The frozen bakery market of the North American region has been classified into the United States, Canada, and Mexican regions. Moreover, the European market has been classified into the region of the United Kingdom, Germany, France, Italy, and Spain. The frozen bakery industry expands to the Asia Pacific region which expands its region of China, India, Japan, Australia, and New Zealand. Some of the regions in the rest of the world are being classified into South America, some of the Middle East, and the African region. From MRFR analysis, it was marked that the European region dominated the whole of the market during the assessment period. It has been noted that the frozen bakery market has been considered to be a mature market where the key players are playing a significant role and helping in the growth of the market. On the regional scale, the frozen market is expected to cover a large frozen bakery market value of high CAGR. It was because the competitors of various brands play a major role in developing the market especially in the region of India and China. An increase in per capita income rate among the population in these country-level analyses has helped in spurring up the market size.

The report tells about the market overview. It signifies the impact of COVID on the nationwide people. It gives detailed information regarding the market dynamics. It explains the growth factors that will promote growth.it symbolizes the recent developments taking place. It also explains the key players and the strategies so carried out by the. Moreover, it explains the market segmentation taking place and explains the sub-segmentation. The forecast says that the market will rise at a great pace in the upcoming years.

At what CAGR is the global Market for Frozen Bakery projected to grow in the forecast period (2022-2030)?

Frozen bakery market is projected to grow at approximately 7.40% CAGR during the assessment period (2022-2030).

How much is the global Market for Frozen Bakery worth in the future?

Frozen bakery market is estimated to reach a valuation of approx. USD 31.23 BN by the end of 2030.

Who are the top players in the global frozen bakery market?

Which region holds the largest share in the global Market for Frozen Bakery?

Europe holds the largest share in the global frozen bakery market, followed by North America and the Asia Pacific, respectively.

What are the major tailwinds pushing the growth of the global Market for Frozen Bakery?

Augmenting demand for convenience foods and rising popularity in emerging regions, are major tailwinds pushing the growth of the global frozen bakery market.