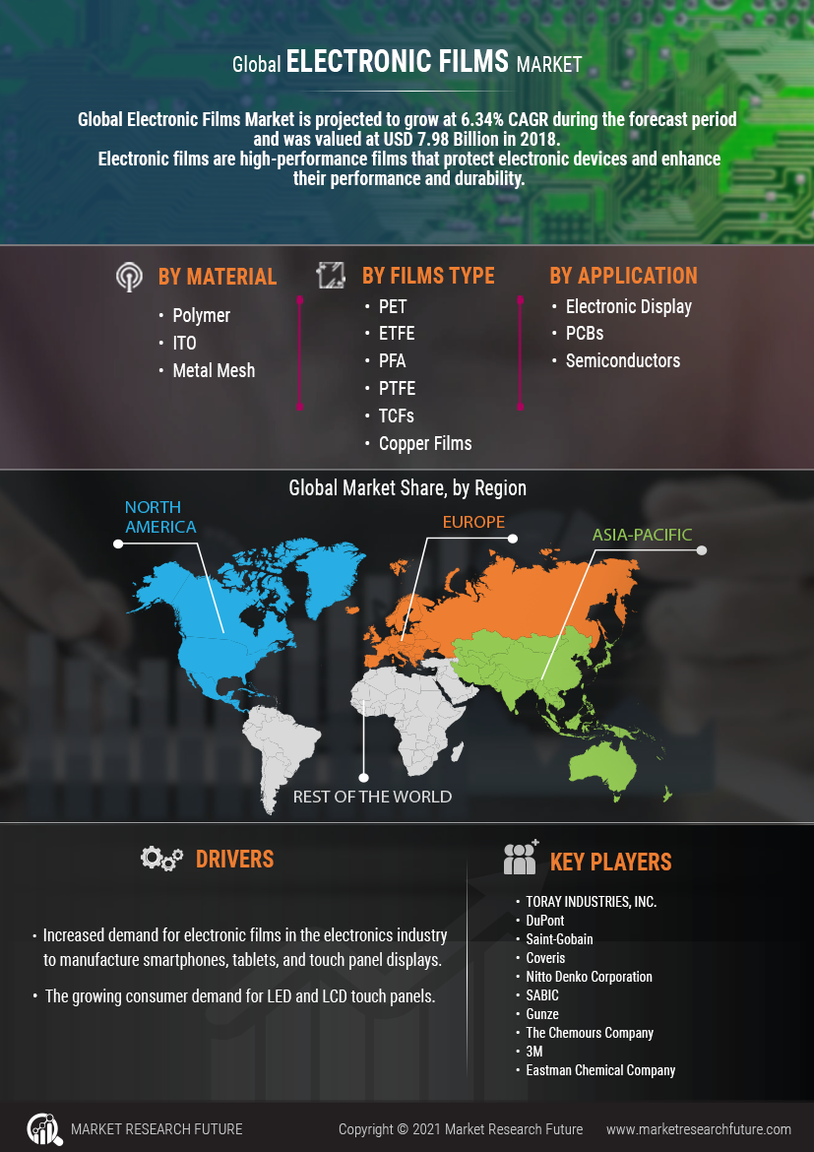 TORAY INDUSTRIES, INC. (Japan), DuPont (US), Saint-Gobain (France), Coveris (US), Nitto Denko Corporation (Japan), SABIC (Saudi Arabia), Gunze (Japan), The Chemours Company (US), 3M (US) and Eastman Chemical Company (US) are some of the major companies operating in the global market.

Electronic films are high-performance films that protect electronic devices and enhance their performance and durability. These films have an array of applications in the electrical & electronics industry on account of their beneficial properties such as high insulation, optical transparency, and excellent chemical resistance. Various types of electronic films such as PET, ETFE, copper films are used in electronic displays of smartphones, tablets, and other electronic devices.  For instance, PET (polyethylene terephthalate) films are used in electronic displays of solar cells to protect the optics from environmental factors such as abrasion, dust, or heat and to improve reflectivity and transmission of light.

The Market is expected to be driven by increased demand for electronic films in the electronics industry to manufacture smartphones, tablets, and touch panel displays. This is primarily attributed to the growing consumer demand for LED and LCD touch panels. For instance, the consumer electronics association (CEA) in January 2018 predicted an increase of 3.95% in the consumer electronics sector over 2017 with a retail revenue of USD 351 billion. Moreover, the increasing demand for high-performance polymer films in numerous electronic applications is further projected to propel the market growth in the coming years.

Furthermore, the rapid technological advancements in electronic films coupled with the continuous development of printed circuit boards and other electronic products will offer immense market opportunities for the players operating in electronic films market during the forecast period.

However, high processing cost associated with ITO based electronic films is expected to create major challenges for the market players and is likely to hinder the market growth during the assessment period. 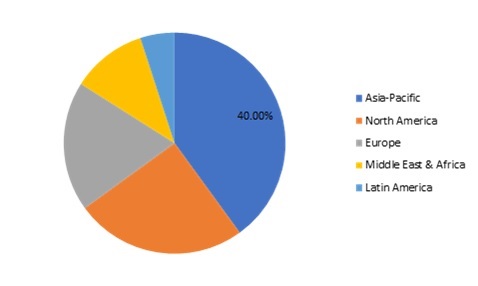 The market in Asia-Pacific dominates the electronic films market and is projected to register the highest CAGR during the forecast period. This is on account of the rapidly growing electronics industry coupled with the rising demand for white and brown goods in the region. China, followed by India and other South-East Asian countries, is the largest consumer in the electronic films market owing to the increasing population and increased disposable income among the consumer base. For instance, according to Indian Brand Equity Foundation (IBEF) report, appliance and consumer electronics (ACE) industry are expected to grow at 9% CAGR during 2017–2022. Hence, creating lucrative opportunities for the players operating in electronic film market in the region. In addition, the innovative activities in the field of electronic films further propel the regional market growth. For instance, in March 2018, Toray Industries, Inc., one of the leading players in the electronic films market, developed an innovative PET film exhibiting higher thermal conductivity than the conventional films under the brand name of Lumirror for insulating materials, battery materials, and circuit boards.

North America accounted for a substantial market share in 2018. The growing demand for electronic adhesives in the developed electronics and telecommunication industry coupled with the significant electronics exports from the US and Canada is expected to drive the market growth. In addition, the key players are emphasizing production capacity expansion to cater the growing demand, which further contributes the regional market growth. For instance, in March 2019, DuPont Electronics & Imaging, a subsidiary of DuPont, announced an investment of USD 220 million to expand production of DuPont Kapton polyimide film and Pyralux flexible circuit materials at its Circleville, Ohio, plant.

Europe is also expected to register significant growth during the forecast period owing to the extensive use of electronic films in a wide range of applications in automotive industry such as engine status displays, and vision systems. This is expected to fuel the growth of electronic film market during the forecast period. Germany, France, and Russia are the major countries contributing to regional market growth.

Latin America and the Middle East & Africa are expected to show substantial growth during the forecast period owing to the rising electronics industry and increased disposable income in the regions.

Market Research Future segments the global electronic films market has been segmented based on material, film type, application, and region.

Based on material, the global electronic films market has been segmented into polymer, ITO, metal mesh, and others.

By film type, the global electronic films market has been categorized into PET, ETFE, PFA, PTFE, TCFs, copper films, and others

Based on application, the global electronic film market has been categorized into electronic display, PCBs, semiconductors, and others.

By region, the market has been categorized as North America, Europe, Asia-Pacific, Latin America, and the Middle East & Africa.Recent DevelopmentNovember 2021 - DuPont Inc. agreed to buy Rogers Corp, an engineering materials maker, for USD5.2 billion. According to the company statement, it is the biggest transaction by DuPont since it split from DowDuPont to supply to rapidly-growing industries such as clean energy, 5G, and electric vehicles. Ed Breen, the CEO, a famous deal maker, has been developing DuPont's high-margin businesses such as water and electronics solutions. In July, the firm snapped up Laird Performance Materials for USD2.3 billion post former divesting its nutrition & biosciences unit. The company announced its plans to sell a significant share of its materials unit & more cyclical mobility, including its stake in the DuPont Teijin Films joint venture.October 2021 -- Division of Panasonic Corporation of North America, Panasonic Industrial Devices Sales Company of America, via its Electronic Materials Division, is happy to launch a new thermoset stretchable film for printed electronics BEYOLEX™. The new material is based on a proprietary non-silicone thermoset polymer chemistry built by Panasonic researchers at the Electronic Materials laboratory in Kadoma, Osaka, Japan.The latest product BEYOLEX™ offers benefits such as ultra-low permanent deformation after stretching, high-temperature resistance, conformability, and softness. The film is 100 microns in thickness, offered on a high-temperature Polyethylene naphthalate (PEN) carrier for mechanical stability throughout processing and a thin Polyethylene terephthalate (PET or polyester) coversheet for protection.

What would be the electronic film market CAGR during the forecast period of 2021 to 2028?

Which region would dominate the electronic film market?

The electronic film market would be dominated by the Asia Pacific.

What are the film types included in the electronic film market report?

Name the companies involved in the electronic film market.