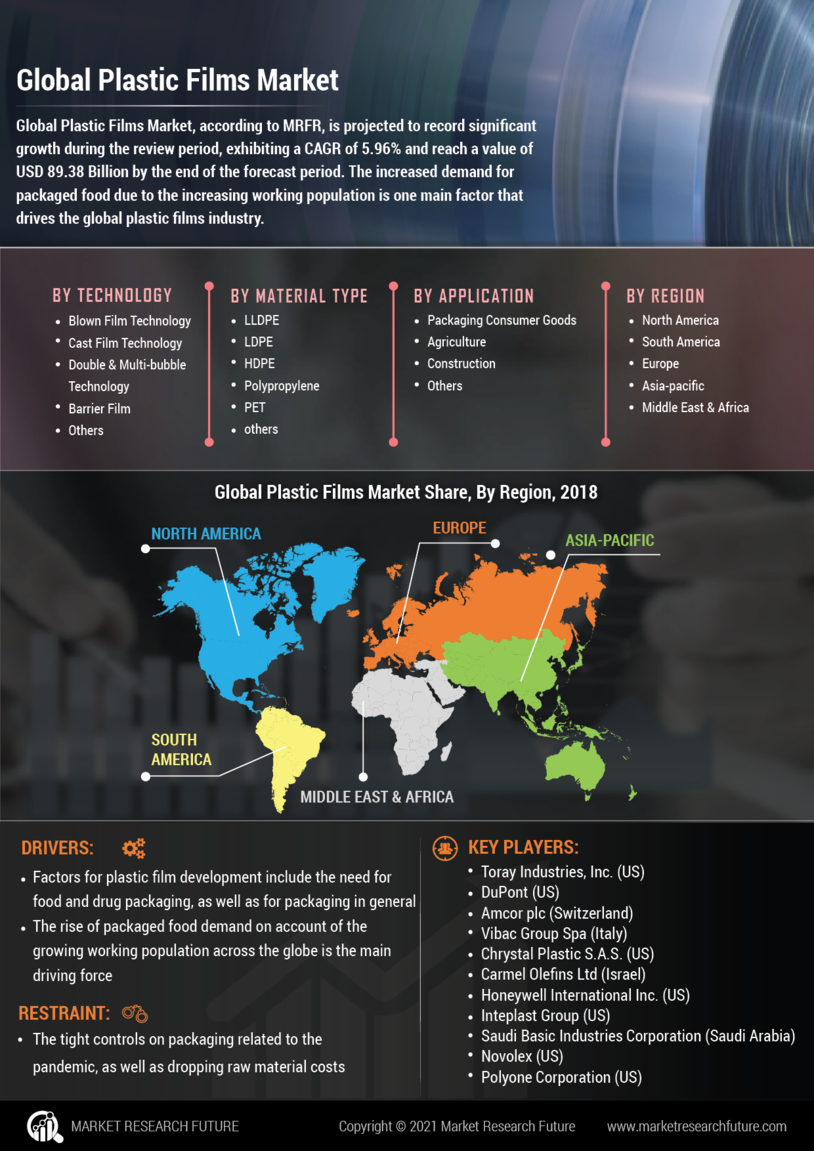 The Market Is Projected To Register A CAGR Of 5.0% Between The Ongoing Forecast Period Of 2021-2028 And Is Expected To Reach A Global Market Value Worth USD 118,623.8 Million

The Plastic Films Market is projected to register a CAGR of 5.0% between the ongoing forecast period of 2021-2028 and is expected to reach a global market value worth USD 118,623.8 million.

The Plastic films market value is predicted to grow at a decent rate during the ongoing forecast period of 2021-2028. The market is driven by factors like increasing applications in market sectors like food and pharmaceutical packaging. The market products like plastic films and sheets are known to be made of polyethylene and polypropylene. The has been an increase in the disposable income of the consumers together that is resulting in a growing demand for packaged food. This is a major factor that is driving the market for plastic films & sheets.

The pandemic was a new yet very uncomfortable situation for the global audience, individuals, markets, manufacturing, and production units. The experience is unique but the obnoxious spread of the pandemic has given rise to an array of functional and manufacturing issues. The rising cases with each passing day have been deteriorating the market conditions and hence, there has been a major disruption in the supply and demand chain mechanism of the global plastic films market during the forecast period that will be ending in 2028.

The conspicuous and involved players of the global plastic films market are en route to generally put resources into the innovative work programs that will help in enormous scope execution and dispatch of the market functions, administrations, and items for a huge scope. Additionally, the plastic films market organizations are open for consolidations, collaborations, mergers, and acquisitions that will expand the serious degree on the global scale to put the wellbeing of the interest group at need and capacity likewise during the estimated time frame.

The global plastic films market is witnessing the rise and dependence of the common man on e-commerce that is rising the demand for protective packaging that is inclusive of plastic films and wraps amongst others that will drive the demand for the market in the forecast period.

The plastic films market is witnessing the rise of stringent market regulations against the environmental concept of plastic recyclability that is giving birth to major trends that might restrain the market from growing as per the predictions for the period.

The market is home to the advanced packaging films that are being recognized as a key commodity as they have a pivotal role to play when it comes to keeping the products intact and keeping them in the proper place before any customer gets their hands on the ordered products. In recent years, the demand for the plastic films market products and services has seen major development and international expansion which has pushed for a mass acceptance of the market applications, especially in the food and beverage industry. Similar trends are predicted to follow during the current forecast period of 2021-2028, and hence, present the market players with growth opportunities and enhance their global visibility.

The market type is inclusive of LLDPE, LDPE, HDPE, BOPP, CPP, PVC, PES, and others like PA.

Based on the market applications

The market applications include markets like Food packaging, Pharmaceutical & medical packaging, and others like Consumer goods packaging and Industrial packaging followed by others like agriculture, Construction, and Medical & Healthcare.

The Plastic films market is currently functioning in 4 major regions across the globe. These regions are the APAC region, the European countries, the North American market scale, and the rest of the world. The rising competition is because the market players that are present in these locations are undertaking massive steps to expand the market and let the market propel on the developments. The demand for the market in the APAC region is driven by an increase in the demand for oriented films that is coupled with the rising demand for packaged food in the developing economies that are a part of the region. The increase in the usage of plastic films in the region for agriculture drives the global market in market places particularly the Indian subcontinent. The Asia-Pacific holds a considerable market share in the global market. China is likely to lead the APAC market in terms of demand for market products like plastic films & sheets used in packaging. The Asia-Pacific is thus likely to maintain its dominance in the global market and regions owing to the steady pace of growth in China and India.

The rising market competition and the rat race to emerge as dominant market players in both the domestic and international regions and propelling market trends is likely to give rise to dependable developments undertaken by the global market players. The most prominent, major, and key players in the Plastic films market that are functional all across the globe are mentioned below:

The intended audience for the global market size is as follows:

What is the anticipated CAGR or growth rate for the global market during the forecast period?

The Plastic films market is predicted to attain growth at a higher CAGR of 5.0% during the forecast period that will be ending in 2028.

Who are the key players in the plastic films market?

Which region is likely to hold the largest market share as per the predictions for the forecast period?

The Plastic films market all across the globe is likely to be dominated by the Asia-Pacific region.

What is the anticipated market share or revenue value that is likely to be attained by the global market by the end of the forecast period in 2028?

The Plastic films market is predicted to attain a global revenue figure that amounts to USD 118,623.8 million.