Biodegradable mulch films are thin pieces of plastic. Farmers till these into their fields. The objective is to increase overall crop yield and quality.

COVID-19 is a virus that has made its mark on the world, much like the Bubonic Plague did in the 14th century. COVID-19, in many ways, is just as dangerous as Yesenia Pesestis was. While far fewer people have died from COVID-19 the virus has left many who recovered with long-term serious health issues and complications. These are the reasons why many governments sought to control its spread through lockdowns and quarantines. They were temporary since they didn’t work.

Governments sought to contain the spread of the virus by imposing quarantines and lockdowns when the virus first started a global pandemic during the spring of 2020. These were soon lifted since they were not effective. In any case, most businesses in most industries around the world suffered immensely because of this.

Many companies in many industries were adversely affected because they were forced to either dramatically slow production down or shut down (at least temporarily!) The companies in the biodegradable mulch films industry were no exception. They were forced to scale back production or shut down. Many farmers found the prices of their supplies going up dramatically as a result. Another negative externality was the fact that crop output and quality declined significantly.

More and more farmable land is being used for industry and other purposes. It’s not uncommon to find developers building shopping complexes, offices, and residential homes on what used to be prime farming land. While arable land is shrinking in terms of availability, the global population is still growing. This means that there are many more mouths to feed and far less land to grow food on.

The global biodegradable mulch films market has a high CAGR. this means that companies can make a handsome profit in the industry in the long term. The fact that the global population and hunger are increasing is incentivizing most industries to invest heavily in research and development. The intent is to develop mulch films that decompose completely when tilled into the ground.

Mulch films are hard to find. This is what makes it more expensive to make them. These two factors are expected to hold back growth in the market.

The biggest challenge that companies in the global biodegradable mulch films industry face lie in making better mulch films that are environmentally friendly and are affordable for most farmers.

A.E.P Industries Inc. is a major American player in the biodegradable mulch films market. It is currently an industry leader because it invested heavily in research and development. Thus, the company was able to develop and market a new generation of better biodegradable mulch films which were friendlier to the environment. It was able to create a sustainable competitive advantage. 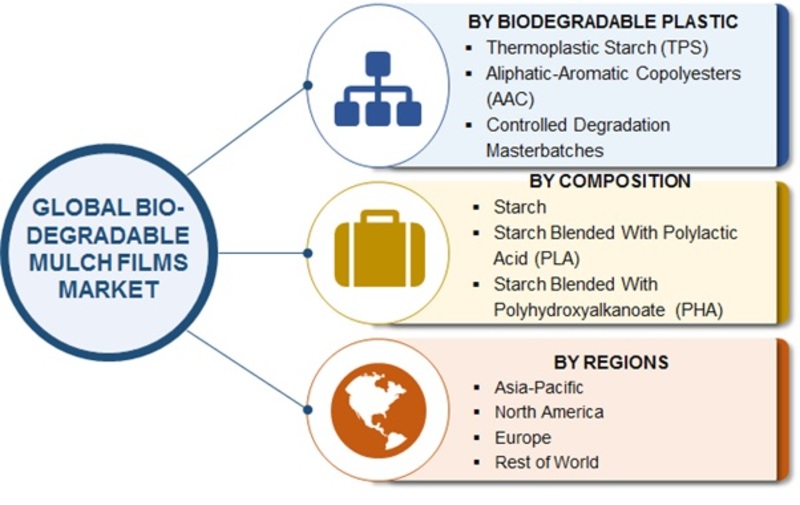 The global biodegradable mulch films market can be grouped into the following sub-segments based on composition:


The starch sub-segment had the highest biodegradable mulch films market share in 2016. Its overall CAGR is expected to be 9.3% from 2017 to 2023. Starch films are abundant in supply. They are also in the affordable price range for most farmers around the world.

Fruits and vegetables have the greatest biodegradable mulch films market share in this segment.

The global biodegradable mulch films market can be grouped into the following regions:

Another factor that is driving demand for these films in the Asia-Pacific region is rising disposable incomes. The fact that Asian populations are becoming healthier and better educated are also key contributing factors. People in the Asia-Pacific region want to eat more meat. Livestock needs a lot of crops to grow healthy and big enough to yield enough meat when slaughtered. This is driving growth in the regional biodegradable mulch films market.

Many farmers in this part of the world are using artificial mulching techniques to make their soil more fertile and hence yield more crop output per acre. They are turning to biodegradable mulch films to meet the immense increase in demand for this type of mulch.

The global biodegradable mulch films market is extremely competitive. It’s also very fragmented. There are few barriers to entry in the industry, it has a high CAGR, and is fairly lucrative. These factors and more are enticing companies to enter the industry in unprecedented numbers.

Companies have to invest heavily in research and development. They are able to develop and market better products for which they can justify charging more. If they market right, they can develop a sustainable competitive advantage that will allow them to become leaders and remain profitable.

Companies are also resorting to strategic partnerships and mergers and acquisitions with other successful companies. Thus, they are able to develop a sustainable competitive advantage that will allow them to remain profitable and powerful!

BASF is a major German company. It has become a recognized name because it invested heavily in research and development. Thus, it was able to develop and market newer and improved products that allowed it to develop the sustainable competitive advantage that it needed to become and remain profitable.

The Asia-Pacifc region currently has the highest CAGR and market size/share. the Latin American region comes in second place

What are the influences exerting an important effect on the biodegradable mulch films market?

The support of improved government guidelines is projected to create prospects for the market.

What are the obstacles to the progress of the biodegradable mulch films market?

The dearth of availability of these films sue to high costs is estimated to hamper the market development.

Who are the benefactors of the biodegradable mulch films market’s growth?

The APAC region is expected to play a major hand in the development of the market.

What is the CAGR expectation from the biodegradable mulch films market in the forecast period?

A 7.90 % CAGR is expected to induce increased progress potential.