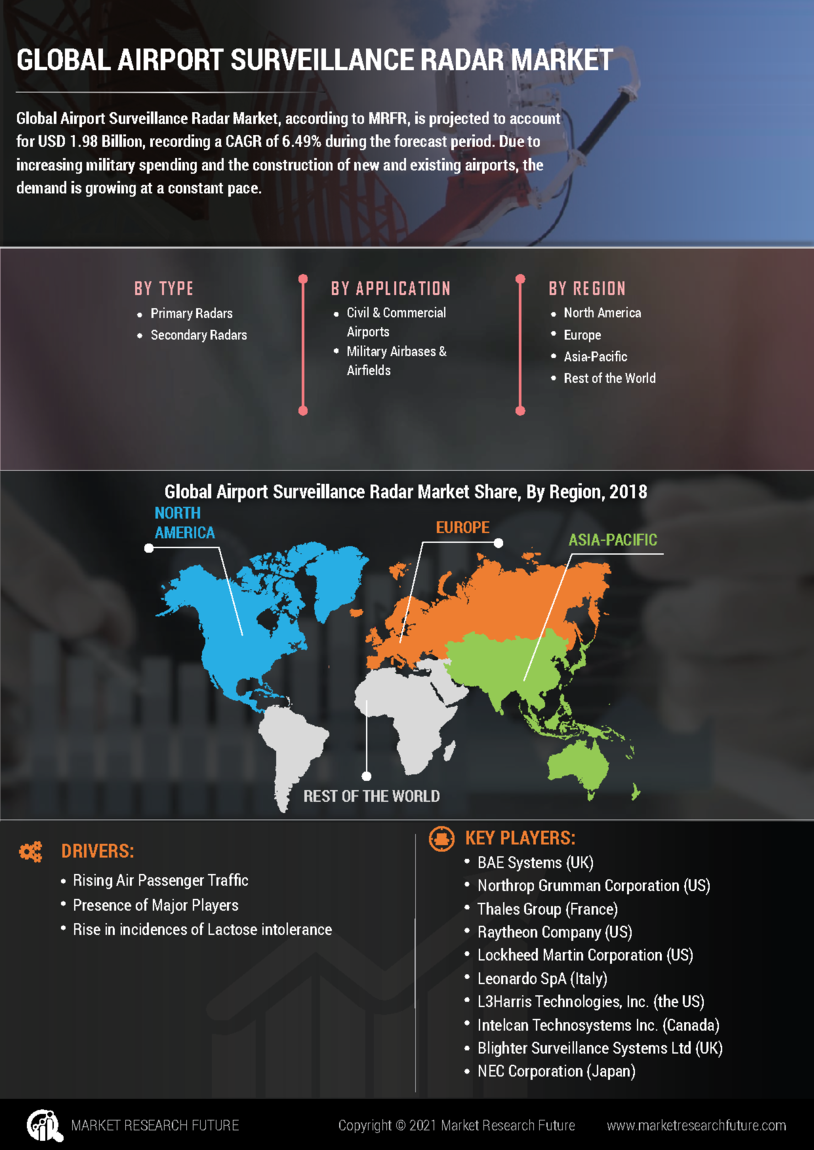 An airport surveillance radar (ASR) refers to a radar system used at airports to detect and display aircraft presence and trace position in the terminal area of the airspace all around airports. It is the major air traffic control system for the airspace around airports. At big airports, it usually controls traffic within a range of 60 miles (96 km) of the airport beneath a height of 25,000 feet. The sophisticated systems at big airports comprise two different radar systems, the primary and secondary surveillance radar. The global market for airport surveillance radar has recorded enormous growth in recent years. The market's growth is primarily credited to the increasing military spending across several countries worldwide. Furthermore, the factors such as the increasing construction of new and existing airports, increasing demand for airspace, and consistent technological advancements are also projected to boost the growth of the airport surveillance radar market over the forecasted era. On the other hand, the high cost of installation and operation and complexity in radar subsystem upgrades are projected to restrict the market's growth in the coming years.

The pandemic of COVID-19 has prompted the governments of many countries around the world to announce full or partial lockdowns. This lockdowns, particularly those classified as non-essential, like the aviation & defence industry, have disrupted operations in many industries.

In the last two months, the aviation sector has experienced an alarming downturn due to the COVID-19 pandemic. The virus epidemic has had a huge effect on airline operators and airport operators. The spread of COVID-19 and the reaction of the aviation industry has contributed to an unexpected decrease in global air traffic. As a result of this significant decline in global air passenger traffic, airport operators' profits from airport charges such as aircraft landing and parking fees and passenger service charges charged by travellers are projected to decrease by about 50 percent in 2020. This is also anticipated in the course of this year to reduce the requirement for new airport surveillance radars.

Because of the pandemic, airport operators who have orders issued with airport radar monitoring firms have either been delayed or cancelled. In addition, after the pandemic, the construction of new and existing airports will continue, but at a lower pace for some period of time. Thus, after the pandemic stops, the airport surveillance radar industry is expected to rebound and will suffer at a lower growth rate.

Growing military spending and the evolution of new and current airports can be attributed to the development of the global airport surveillance radar industry. Globally, aircraft have been seen to develop exponentially, needing sufficient control systems such as airport surveillance radar to minimise aviation accidents. Aviation investors have begun to introduce satellite-based technology to expand their air traffic surveillance activities with the development of space technologies. The increasing demand for airspace has produced the need for next-generation technology to make air transport safer, more effective and less environmentally friendly.

the high cost of installation and operation is expected to restrain the market growth during the forecast period. Complexity in radar subsystem upgrades and budgetary inconveniences are expected to hinder the growth of airport surveillance radar market.

The global market was dominated by the primary radar segment. In 2018, it was estimated at USD 861.9 million and is projected to post a 7.07 percent CAGR during the forecast period. The highest market share of this category is due to the growing spending by the governments of developed countries in airport expansion.

During the forecast period, the military airbases & airfields segment is predicted to grow at the fastest CAGR. The increasing security expenditures by governments worldwide are driving the growth of the segment.

In 2018, the industry was estimated at USD 462.9 million in North America. The country-level markets in North America are the US and Canada. The region's demand is projected to hit USD 689.0 million by 2025, rising during the forecast period at a CAGR of 5.85 percent. This growth can be due to growing US government spending in airport modernization. In addition, technological developments and the existence of major players such as Raytheon Group, Northrop Grumman Corporation, Lockheed Martin Corporation are factors that drive the growth of the market.

In 2018, Europe accounted for the second biggest share of the market. The growth of the regional market is led by the involvement of prominent players such as ASELSAN AS, BAE Systems and Thales Group. At a CAGR of 6.07 percent during the forecast period, the airport surveillance radar market in Europe is projected to hit USD 444.7 million by 2025.

In 2018, Asia-Pacific represented a significant proportion of the global economy. In 2018, the regional market was estimated at USD 236.5 million and is projected to cross USD 413.0 million by 2025, increasing during the forecast period at a CAGR of 8.29 percent. The growth of the region's demand is motivated by the rise in air passenger traffic in emerging economies like China and India and the increasing need to boost passenger safety.

A substantial share of the overall economy was accounted for by the Middle East & Africa in 2018. The regional market in 2018 was estimated at USD 171.1 million and is projected to hit USD 269.9 million by 2025, expanding during the projection period at a CAGR of 6.73 percent. The growth of the market in the region is led by the growing construction of new airports in countries such as the UAE.

Mergers and Acuisitions to Remain Primary Focus of Market Players

Airport surveillance radar market market payers are projected to achieve attractive growth prospects in the future, as demand for airport surveillance radars in the global market grows. Organic development techniques, such as product releases, product approvals and others, such as patents and activities, are the subject of numerous firms. Acquisitions, and cooperation & partnerships were inorganic growth plan practises observed in the industry. These operations have opened the way for industry leaders to grow their company and customer base.

Who Are Top Industry Players in Airport Surveillance Radar Market ?