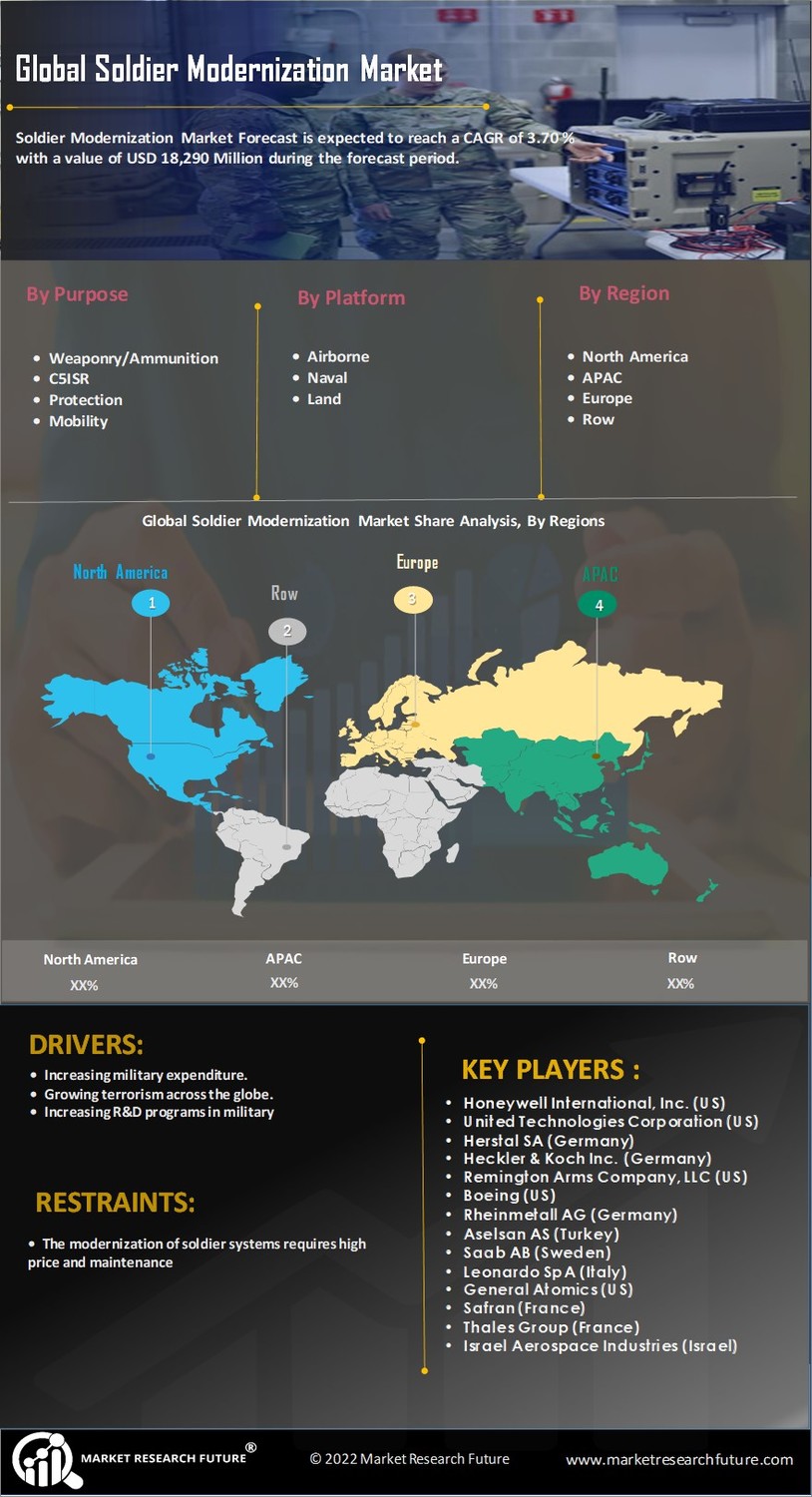 The rise in concern for the safeguarding and protection of soldiers worldwide has led to the growth of the Soldier Modernization Market. The market is concerned about upgraded and advanced systems with modernization techniques that can be helpful for the soldiers in the military missions. The public’s and government's concern to protect the frontline workers like soldiers and armies who protect the nations worldwide have raised the Market Value.

Soldier Modernization Market Forecast is expected to reach a CAGR of 3.70 % with a value of USD 18,290 Million during the forecast period.

Soldier Modernization systems consist of advanced weapons, military vehicles, required materials, and other important items during wars and attacks. These modernized systems are helpful in all the military platforms, such as for the terrestrial army, navy and air force. The key players across the globe are contributing to more advanced featured systems to meet the demand of the defence sectors. The increased terror attacks, wars, violence, and conflicts are boosting the Soldier Modernization Market to develop new technologies, leading to the invention of advanced systems.

The government and defence entities investments in military-based markets are chiefly driving the Market Size. These growth factors are even bringing new opportunities for discovering modernized systems, which boosts the Soldier Modernization Market Value. The growing demand of military sectors for upgraded systems for military operations and missions is accelerating the market's growth. The developing nations are more into conflicts and civil wars; they even face terrorist attacks, and war between other nations across the globe is driving the Soldier Modernization Industry Growth.

These factors are letting the players to concern about developing advanced military equipment, weapons and other rifles with the help of modern techniques.

The military-based markets have faced mixed impacts during the pandemic period. The Soldier Modernization Market got affected when the industrial units were shut down. The lockdown guidelines negatively impacted the market when the supply of raw materials was stopped, and the delivery process was delayed. The transportation of military equipment, materials and weapons to the military departments were even halted. All these factors led to huge economic losses. But the rise in concern about the protection of military forces will help the market stabilize its growth in the future years. The large investments in the defence sectors even propel the Market to reach a strong CAGR value.

Chief Factors Existing In the Market

The key drivers of the Soldier Modernization Market are driving the market at the global level. The increase in military expenditure, especially in countries like China and India, boosted the Market. The growth of terrorist attacks worldwide is another driving factor of the market. The rise of research and development programs in military sectors is acting as the primary driver for the Market Growth.

The Market is even facing challenging factors affecting progress. Lack of availability of advanced products and systems from time to time is challenging the market. But the manufacturers are trying to overcome these issues.

The market is noticing huge growth opportunities worldwide due to its higher demand. The rise of conflicts and attacks opens opportunities for the Market. The rise in awareness to protect the soldiers enhances the Soldier Modernization Market Trends.

Cumulative Evaluation of the Market

The Soldier Modernization Market Analysis evaluation shows the overview of the market and its importance in the military field. The presence of market dynamics and its role in the market's growth has been stated. Despite the moderate impact of the COVID-19 pandemic, the Market will successfully attain its expected value. The key players check the growth limiting factors so that they won’t hamper the growing Soldier Modernization Market Trends.

The Market is segmented into two major segments – purpose and platform.

The purpose segment of the Soldier Modernization Market consists of sub-segments such as weaponry/ammunition, C5ISR, protection and mobility. Among these, weaponry/ammunition has dominated the market in the past years. This segment is propelling due to the growing demand for modernizing legacy systems and the rise in the need for advanced military equipment like wearables and sensors in the military sectors.

C5ISR segment will notice the highest CAGR value due to the increased use in the military operation, especially in border protection.

The rise in demand for advanced ammunition to safeguard military personnel will drive the protection segment. Moreover, the mobile segment will even show steady growth due to the need for quick transportation facilities to transport resources to the military troops is accelerating the segment.

The platform segment of the Soldier Modernization Market is categorized into airborne, naval and land.

The airborne segment will reach the highest CAGR due to increased investment by countries such as China and India for modernizing aircraft.

The demand for modernizing naval ships by the UK Royal Navy will drive the naval segment of the market. Moreover, the land segment is considered the dominating segment, which holds the highest share of the Soldier Modernization Market Share due to the high demand for enhanced security, and lightweight military equipment is driving the segment.

The geographical status of the Soldier Modernization Market Analysis shows the major regions covered by the market, such as North America, Europe, Asia Pacific, Middle East & Africa and Latin America.

The North American region is noticing the highest growth rate and good share value of the Soldier Modernization Market Share, and it is considered the dominating region due to the presence of prominent players in the region. The increased collaboration rate between prominent companies in Europe is driving the European market.

The increased military expenditure and conflicts in the regions of Asia Pacific is accelerating the region. Moreover, the higher demand for modernizing aircraft in the Middle East and Africa and the increased rate of procuring advanced military equipment in Latin America are driving these regions' regional markets.

Competitive Intensity within the Market

Long Range Precision Fires are the U.S. Army’s number one modernization priority. The program's immediate goal is to restore the Army’s erstwhile advantage in indirect fires, both artillery and rockets/missiles. This program to have a long-term goal of having LRPF play a central role in a new American way of war based on achieving an information advantage to conduct coordinated fires, of all types, across multiple domains.

In November 2019, the US Army Intelligence and Security Command (INSCOM) signed a four-year contract with BAE Systems amounting to USD 100 million to procure technical, functional support, maintenance, and support services for its 16th Military Intelligence Brigade (MIB). The contract enables the US Army to experience enhanced surveillance and situational awareness during conflicts and war.

What factors are estimated to steer the soldier modernization market in the approaching period?

The upgradation of ammunitions in various military bodies is estimated to benefit the market.

Who are the leaders of the soldier modernization market modification in the forecast period?

Which geographical markets are backing to the overall soldier modernization market expansion?

The North American region is estimated to lead the charge in the forecast period.

What is the CAGR predicted for the soldier modernization market in the assessment period?

A CAGR of 3.70% is foreseen to back the global market development in the forecast period.

What revenue levels can be anticipated from the global soldier modernization market in the forecast period?

An income of USD 18,290 Million by 2028 is predicted to change the market landscape in the forecast period.