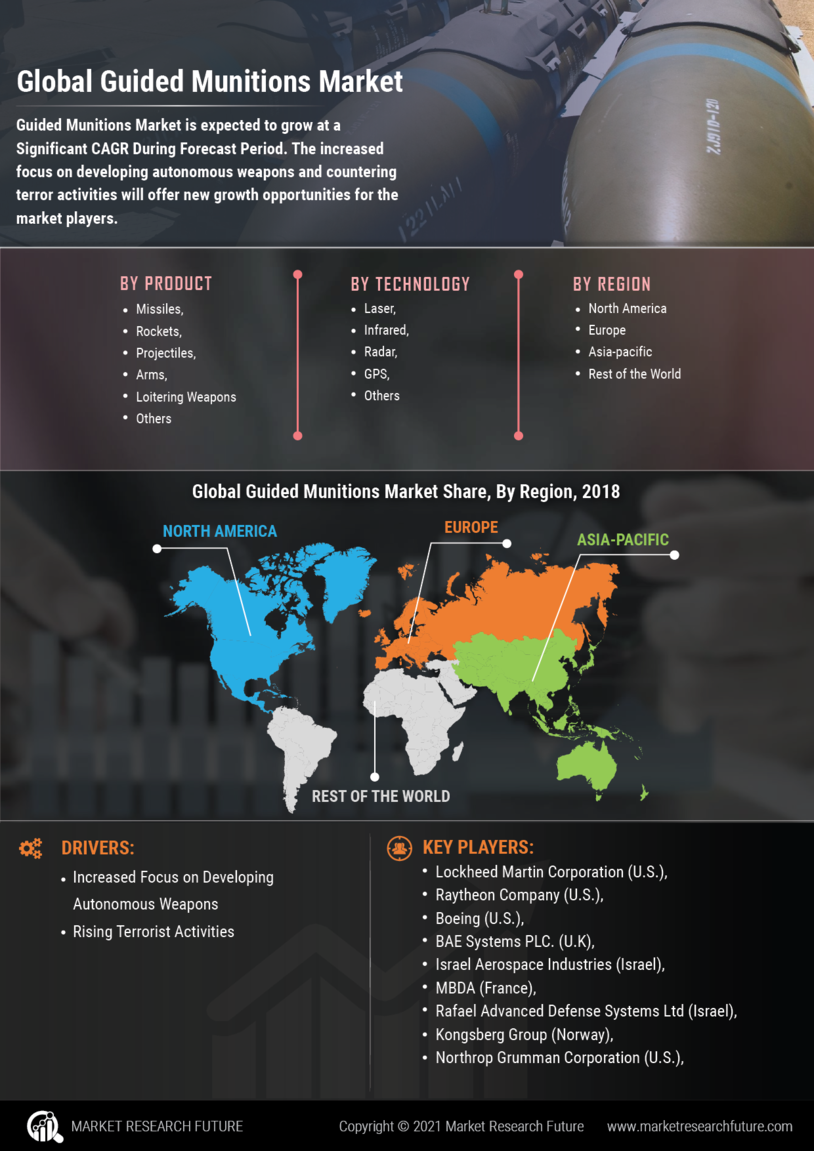 The guided munitions are helpful to be directed and aimed at single or multiple targets. It is also popularly known as smart weapons, smart munitions, or guided ammunition in different parts of the world. It has been found that guided munitions rely on their either guidance systems or external guidance.

This smart weapon can be launched from submarines, aircraft, land vehicles, and ships. Presently, various military programs emphasize precision ammunition, especially on artillery munitions, P.G. (precision-guided) kits, and other standoff and anti-tank weapons with a Low Rate Initial Production (LRIP), which is fueling the global Guided Munitions Market in the forecast period.

In the Guided Munitions Market Trends, a weapon system plays an important role for land, marine, and air platforms. Thus, the weapon system technology is registered to hold the highest CAGR rate during the analysis period. The Guided Munitions Market is divided into supersonic, subsonic, and hypersonic based on speed. The hypersonic missiles threat is anticipated to expand the highest CAGR during the review timeframe.

In terms of the global market growth, many agreements, partnerships, and contracts have been taken place. For instance, a contract was signed between L&T MBDA Missile Systems Ltd and the Indian Armed Forces in 2018. This contract has been proposed to indigenously design, supply, and manufacture the highly advanced guided weapon systems under the ‘Make in India’ initiative. Furthermore, a contract was signed between Boeing and the U.S. Air Force in 2014. This contract was aimed to manufacture arming devices for a long-range subsonic, air-launched cruise missile (ALCM) self-guided missile.

According to the Guided Munitions Market Forecast report, the global coronavirus has brought many challenges for the defense industry. At this time, the global Guided Munitions Market has been hampered due to the government restriction on public gathering and declared lockdown. The covid-19 situation has negatively affected the production rate of guided munitions. Moreover, temporal operation issues have also been witnessed because of the restrictions on on-site access.

However, many governments focus on economic recovery because of the pandemic. But the reduction in the guided munitions quantity is still present in the industry. Presently, slow and steady growth has been witnessed in the global Market to achieve the largest market share in the forecast period.

The increasing terrorist activities, increased use of smart weapons, and rising regional conflicts across the globe are some of the important factors responsible for the Guided Munitions Market Growth during the forecast period. Moreover, rapid growth has been witnessed in the research period due to significant investments in R&D activities and technological advancements.

In 2019, the U.S. Navy awarded a contract with BAE Systems worth USD 2.68 billion for the quantity purchase and indefinite-delivery of APKWS laser-guided bombs. This type of initiative by the U.S. Navy is fueling the Guided Munitions Market Value in the forecast period.

The market players of the Guided Munitions Market have new opportunities in the forecast period due to the increased focus on developing autonomous weapons by different country’s government.

Moreover, the increasing countering terror activities in different parts of the globe will bring significant growth opportunities for the vendors and key players.

The extremely complicated weapon guidance systems can be one of the major restraints for the global Guided Munitions Market in the forecast period. Moreover, another major market restraint can be the restricted range of maneuverability.

Furthermore, the high cost of production might hinder the global Guided Munitions Market Size between the forecast year of 2018 to 2023.

The Guided Munitions Market Outlook report highlights that the issues related to integrating larger guided munitions might bring the biggest challenge for the global Market.

Furthermore, the coronavirus outbreak has disrupted the supply and manufacturing chain, which is another biggest challenge for the market players to combat the pandemic.

The global Guided Munitions Market is anticipated to witness significant market growth in market value and market share during the forecast period. Moreover, the growing contributions of the key market players across the globe are expected to bring a new revolution in the upcoming years.

In addition, the innovations, growing research, and developmental activities are the important factors to enhance the Guided Munitions Market Value in the future years.

The current Market Size has been fueled by the growing market segments, including launch platform, technology, and product.

Based on the launch platform segment, the global Guided Munitions Market has been segmented into Airborne, Land-based, and Naval.

In 2017, the land-based guided munitions segment was anticipated to hold the largest Guided Munitions Market Share, and it is considered the most widely used guided munitions. This is because of the rising demand for anti-tank missile systems among the military forces across the world.

The infrared technological segment is expected to register the largest market demand in the research period. This segment expands market growth due to the increasing demand for advanced technological autonomous weapons.

Based on the product segment, the global Guided Munitions Market has been classified into Loitering Munitions, Guided Rockets, Tactical Missiles, Torpedoes, and Guided Ammunition.

The guided missiles segment is projected to be the most popularly used guided munitions. In 2017, this segment generated the largest Market Share due to the increasing guided missiles demand tactical operations.

As per the Guided Munitions Market Outlook report, the current Market has been segregated into various geographical areas such as Asia Pacific, North America, the Middle East & Africa, Europe, and Latin America.

Among all, the Market of North America is anticipated to dominate the global Market during the forecast period of 2023 due to the increase in different military equipment modernization programs and the increasing counter-terrorist activities in the region. For instance, the European region is projected to trail North America in the assessment period due to the increased smart weapons procurement by developed countries like the U.K, France, and Germany. Therefore, the global Market is anticipated to register significant growth during the review period.

In 2018, a contract was signed between Lockheed Martin and the U.S. Navy. This contract has aimed to support the Paveway II Laser Guided Bomb (LGB) weapons training by follow-on production of Enhanced Laser Guided Training Rounds.

In 2018, a contract was signed between Raytheon Company and the U.S. Navy. This has proposed integrating the F-35 Joint Strike Fighter's C variant and precision-guided standoff weapon.

As per the Guided Munitions Market Analysis, the present report comprises extensive primary research. Along with this, a detailed analysis of quantitative and qualitative aspects has been covered, including various key opinion leaders and industry experts. This research analysis is helpful to gain a deeper insight into the Market as well as industry performance.

Guided Munitions Market is estimated to witness a CAGR of 4.4% by 2030