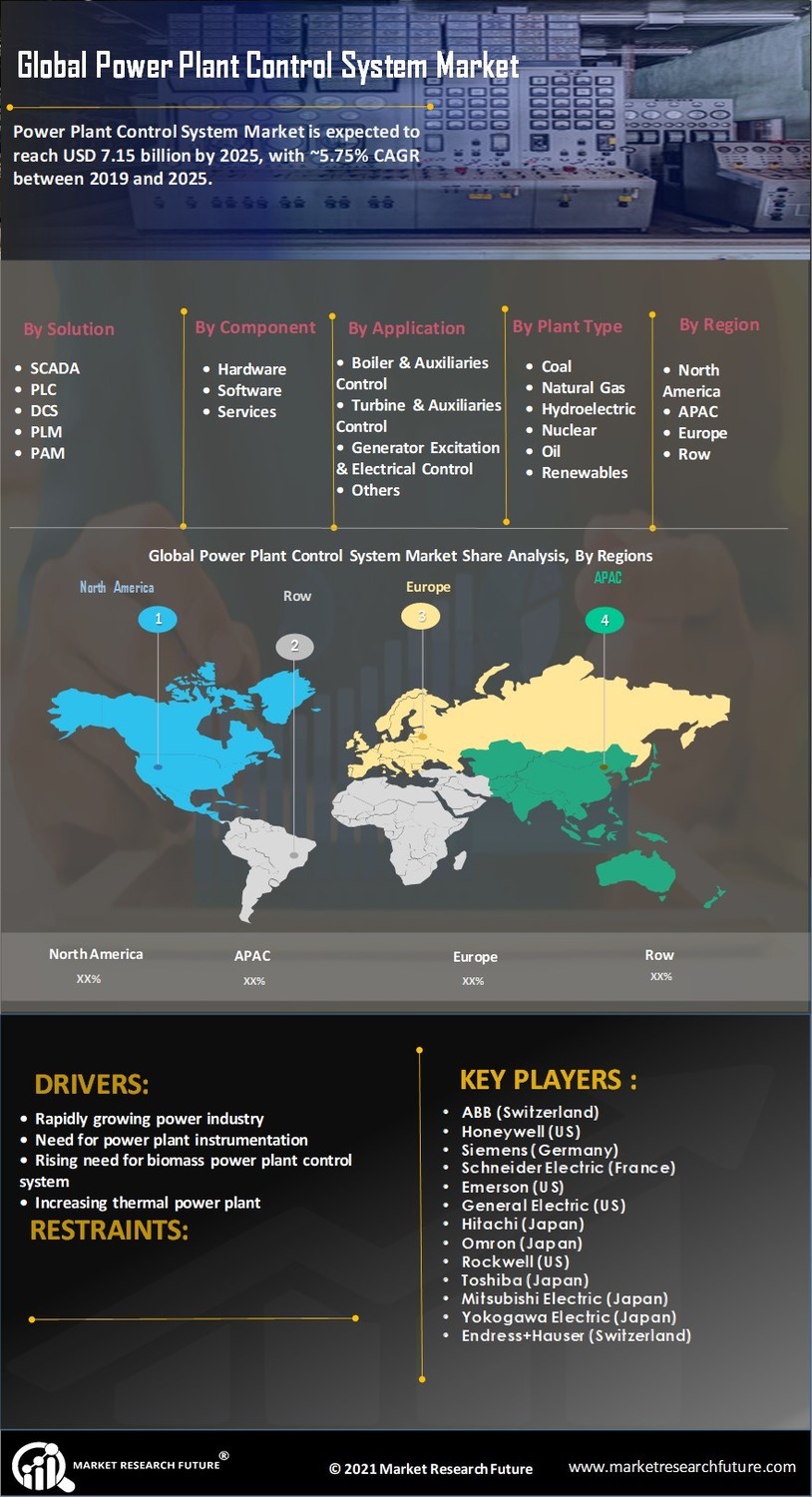 Power Plant Control System controls the power plant operations like active power, voltage, reactive power, power factor, and frequency at the point of interconnection using the advanced distributed control systems. These systems provide controlling systems for improving productivity and lessening the environmental impact on the power plants. Globally, almost all the grid codes use power plant control systems for any renewable plant at the capacity of 10 MW.

These systems are majorly used for monitoring, controlling, and regulating the plant that avoid the risk factor and accidents.

The major factors driving the growth of the global market of power plant control system include the rapidly growing power industry, need for power plant instrumentation, rising need for biomass power plant control system, increasing thermal power plant instrumentation, increasing power generation capacities worldwide, implementation of DCS system in power plants, and government initiatives regarding the adoption of industrial automation. For instance, according to the International Trade Administration (ITA) report published in 2016, “Industries 4.0” is a program, through which the German government is developing “Smart Factory” capabilities throughout Germany by developing various software and programmable logic controller (PLC) systems for industrial automation. This is expected to drive the global by providing secure and reliable system solutions through industrial automation. However, the increasing demand for safety compliance automation products and adoption of Industrial Internet of Things (IIoT) for real-time decision making is expected to create a growth opportunity for the global Power Plant Control System Market.

Many major players such as ABB, Honeywell, and Siemens are actively focusing on signing contracts and forming agreements with utilities and other industries to supply power plant control systems. For instance, in 2017, ABB signed a contract with Ansaldo Energia (Italy) to provide a distributed control system (DCS) for the 340 megawatts (MW) open cycle power plant. This has helped the organization create a product appeal in the market in Europe. However, high capital investments and limited re-investments are expected to restrain the growth of the global Power Plant Control System Market.

The global power plant control system market has been segmented based on solution, component, application, plant type, and region.

Based on component, the global Power Plant Control System Market is segmented into hardware, software, and services. The software segment is expected to grow with the highest CAGR during the forecast period.

Based on application, the global Power Plant Control System Market has been segmented into boiler & auxiliaries control, turbine & auxiliaries control, generator excitation & electrical control, and others. The generator excitation & electrical control segment is estimated to be the fastest-growing segment for power plant control systems. This market is driven by the increase in alternative energy programs in Europe, Asia Pacific, and North America.

The global power plant control system market is expected to witness high growth during the forecast period owing to the rise in alternative energy programs globally.

Based on region, the global market is segmented into Asia-Pacific, North America, Europe, the Middle East & Africa, and South America. Asia-Pacific holds the largest market share due to increased power consumption, rising influx of renewable sources in the energy mix, and renovation, modernization, and up gradation of aging power plants in the region.

What is expected to be the market value by 2025?

What factors back the market growth in APAC?

High power consumption, increasing influx of renewable sources in the energy mix, surging renovation as well as modernization, along with the upgradation of aging back the market growth in APAC.

Which segment can attain the fastest growth rate, among all the plant types?

Among all the plant types, the renewable segment can attain the fastest growth rate.