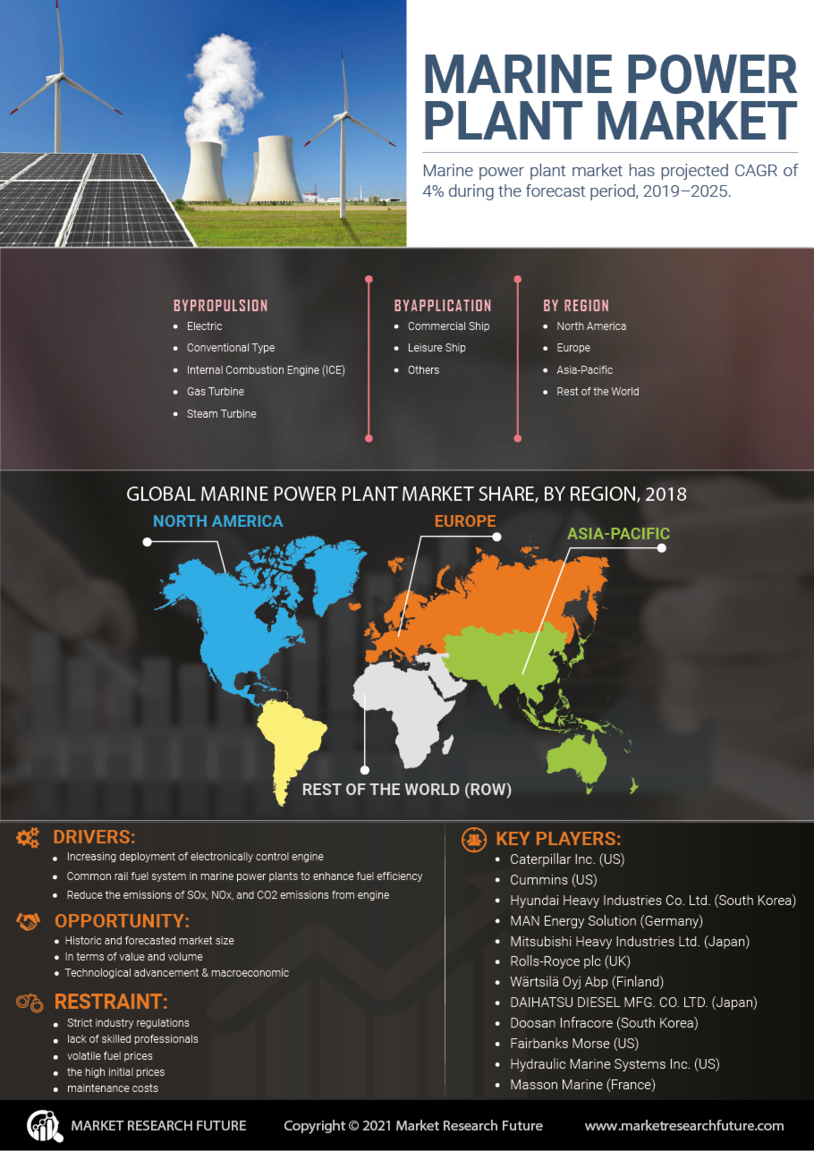 The increasing deployment of electronically control engine and common rail fuel system in marine power plants to enhance fuel efficiency and to reduce the emissions of SOx, NOx, and CO2 emissions from engine drives the growth of this market. Moreover, the growth of commercial shipping, adoption of LNG over conventional marine fuel for power generation, the growing marine vessel power plant and marine diesel power plants globally, along with the rising cross-country commodity trade and transportation are also expected to drive the demand for marine power plants in the global market.

The significant increase in the demand for LNG globally, developing economies of China, Mexico, Brazil, and Saudi Arabia, and deployment of hydro power plants in ships that use energy of oceans (waves or tides) to generate electricity are expected to create opportunities for players operating in the global market during the forecast period. Caterpillar, Cummins, MAN Diesel & Turbo, and Wärtsilä are the major marine power plant companies operating in the global market. The players mentioned above have rich product portfolio and vast industry experience. They are primarily focusing on marine power generation and marine technology and forming strategic partnerships through collaboration, joint venture, and partnership with the players across various manufacturing industries and commodity traders. These strategic partnerships between the manufacturers and the end users are expected to create growth opportunities in the market during the forecast period. The high prices of marine power plant and volatile crude oil prices are the major factors restraining the growth of global market during the forecast period. 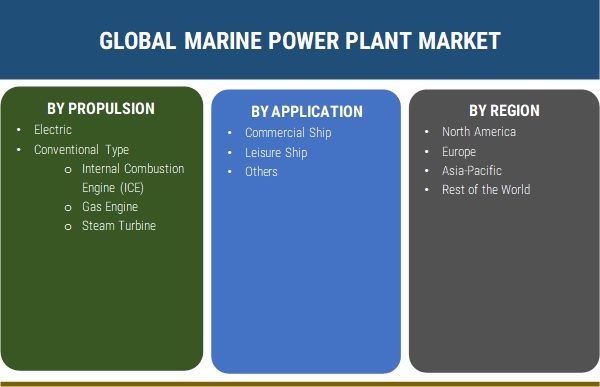 Geographically, the global marine power plant market has been categorized as Asia-Pacific, North America, Europe, and the rest of the world (RoW). Whereas, RoW is further segmented into two regions such as the Middle East & Africa and South America. Asia-Pacific is anticipated to hold the largest share and is expected to witness the highest growth rate than Europe and North America during the forecast period with the presence of several marine power plant industry, large consumer base, developing transportation and logistics sector, growing consumption of natural gas and availability of inexpensive labor in China and India. Furthermore, growing governments initiative to promote India as the world’s most preferred hub for manufacturing by 2025 is also contributing to the growth of this market in Asia-Pacific during the forecast period. However, the market in Europe is growing at significant rate during the forecast period. This growth is due to growing ocean energy development, hybrid marine power plants and rising investment for the development of commercial scale power plants across the country. According to the new report from Renewable UK, marine energy industry is projected to be worth Euro 6.1 billion (around USD 6.69 billion) in the UK economy by 2035 and displacing up to half of a million tons of CO2 every year by 2020.

The report for global marine power plant market of Market Research Future covers extensive primary research. This is accompanied by a detailed analysis of qualitative and quantitative aspects by various industry experts and key opinion leaders to gain deeper insights into the market and industry performance. The report gives a clear picture of the current market scenario, which includes the historic and forecasted market size, in terms of value and volume, technological advancement, macroeconomic, and governing factors of the market. The report provides comprehensive information about the strategies of the top companies in the industry, along with a broad study of the different market segments and regions.

The market growth rate in the years ahead can be 3.5%.

What is expected to be the market value by 2027?

The global market for marine power plant can witness massive growth by 2027.

What are the chief growth-inducing factors in the market?

The considerable surge in the demand for LNG, rising demand across the developing countries like Mexico, China, Saudi Arabia and Brazil, along with the surging deployment of hydro power plants in ships are the chief growth-inducing factors in the market.

What role do the notable companies play in the market growth?

Most of the notable companies in the market have a robust product portfolio as well as rich industry experience. These players are mostly focused on marine power generation along with marine technology. They form strategic partnerships via joint venture, partnership and collaboration with vendors across manufacturing industries as well as commodity traders.