The major factors driving the growth of the global pipe laying vessel market include increase in the exploration and production activities and growing investments in the offshore oil and gas sector. In 2017, The US Energy Information Agency (EIA) reported increase in oil production in the US due to the high oil prices, which has led to the increase in the drilling activities. Similarly, Shell (Netherlands) is investing extensively in drilling activities in deep water areas in the Gulf of Mexico, which is expected to create new avenues for pipe laying vessel providers in North America.

Additionally, the global market is projected to grow at a high rate during the forecast period due to advancements in offshore oil exploration and production technologies. Countries such as China, the US, and India are witnessing an increased need for energy and oil production activities. According to BP Statistics 2018, the global oil production rose by 2.2 million b/d with maximum growth in the US, Canada, and Saudi Arabia. 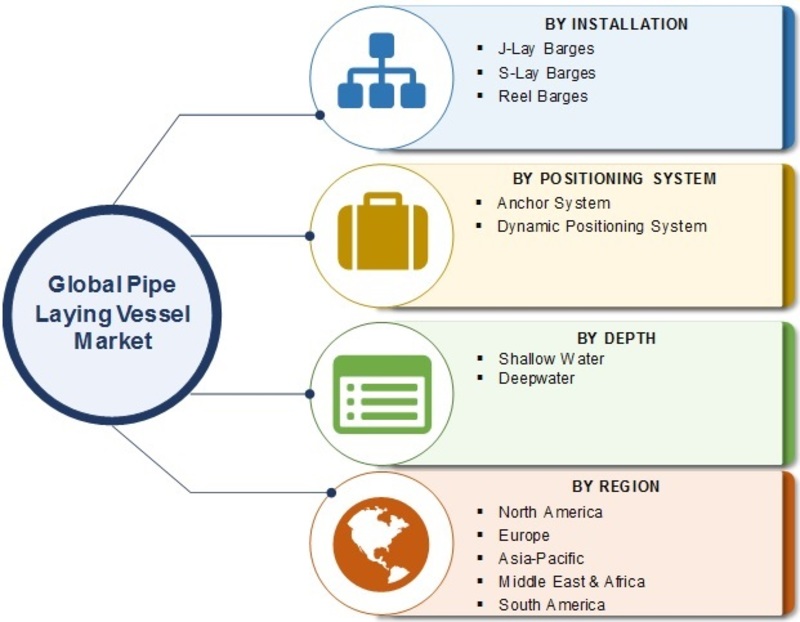 On the basis of region, the global pipe laying vessel market is segmented into Asia-Pacific, North America, Europe, the Middle East & Africa, and South America. Asia-Pacific holds the largest share in the market due to the increased investments in the oil and gas exploration and production activities, especially in China. The country’s major oil companies have plans to increase investments in the domestic oil & gas industry. Similarly, the oil & gas industry in India is expected to attract USD 25 billion in exploration by 2022. Similarly, growing energy demand in countries such as India, Australia, and Indonesia are expected to drive the growth of the market in Asia-Pacific. Moreover, the market for pipe laying vessels in North America and the Middle East is also expected to grow during the forecast period due to the growing focus on developing offshore reserves to replace maturing onshore fields.


Pipe laying vessel is a type of marine vessel, which is used in offshore oilfield development. This vessel enables the smooth functioning of operations from the drilling zones to the processing plants situated on the shore. The various pipe laying methods includes J-Lay, S-Lay, and reel lay. Moreover, pipe laying vessels are used to install pumps, valves, and other equipment to connect floating units on the surface to the seabed.

The market can accrue a growth rate of more than 6.34% during the review period.

What is expected to be the market size by 2024?

The projected valuation of the market by 2024 can be USD 3.84 Billion.

What are the main pipe laying methods?

Which positioning system-based segment is leading the global market?

The dynamic positioning segment is currently in the lead in the global market.