Pemphigus Vulgaris is a type of autoimmune disease in which the antibodies produced against the bacteria attack the healthy cells and causes skin problems. Pemphigus Vulgaris affects both men and women, but middle- and old-aged people are more likely to develop this condition.

The key factors responsible for influencing the market growth are the increasing prevalence of pemphigus vulgaris, rising bacterial and viral infection, and the growing prevalence of cancer. The side effects associated with the medication and increase in geriatric population are also estimated to drive the market during the forecast period. However, factors such as high cost related to treatment, unfavorable reimbursement situation, and lack of awareness are expected to restrain the market growth

Pemphigus vulgaris is one of the most life-threatening autoimmune skin disorders that occurs due to various reasons such as bacterial infection, increasing pollution, and side effects of some medications. According to the National Organization for Rare Disorders (NORD), 2015, the prevalence of pemphigus was high within the US and Europe affecting approximately 0.7 to 5 people per 1,000,000 each year in the overall population. It was also mentioned that pemphigus foliaceus a form of pemphigus vulgaris has a high prevalence in Africa and some rural areas in the world.

According to the International Pemphigus & Pemphigoid Foundation, it was predicted that approximately 40,000 to 50,000 people across the world and 2,500 people in the US were diagnosed with pemphigus disorder in 2017. The increase in the prevalence of pemphigus vulgaris across the globe is expected to drive market growth during the forecast period from 2018 to 2027. 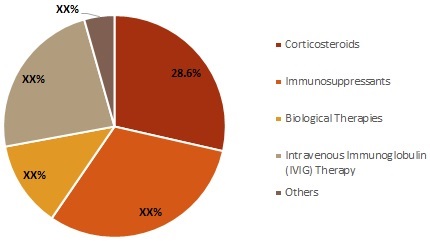 The global pemphigus vulgaris market, by treatment, has been segmented into corticosteroids, immunosuppressants, biological therapies, and intravenous immunoglobulin (IVIG) therapy. Based on the route of administration, the market has been classified as intravenous, subcutaneous, and oral. By end user, the global pemphigus vulgaris market has been categorized as hospitals & clinics, specialty dermatology clinics, and research & academic laboratories. 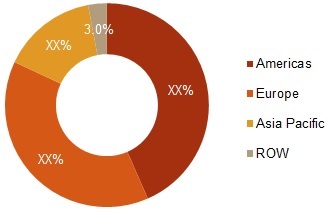 The global pemphigus vulgaris market, based on region, is divided into the Americas, Europe, Asia-Pacific, and the Middle East and Africa.

The Americas accounted for the largest market share in 2017 and is estimated to dominate the global pemphigus vulgaris market. The Americas is anticipated to reach USD 2971.41 million by 2027 at a CAGR of 8.1% from 2018 to 2027. The Americas accounts for the largest regional market owing to the increasing prevalence of pemphigus vulgaris, increasing geriatric population, and raising funding for the research & development of skin diseases. According to the National Center for Biotechnology Information 2014, it was predicted that the prevalence of pemphigus vulgaris in the US is in the range of 0.76 to 5 new cases per million every year. Also, according to the International Pemphigus & Pemphigoid Foundation, it was projected that approximately 2,500 people in the US suffered from pemphigus disorder in 2017.

Some of the key strategies followed by players operating in the global pemphigus vulgaris market were innovation, product development, and acquisition & mergers.

At what CAGR is the global pemphigus vulgaris market projected to grow in the forecast period (2018-2027)?

Pemphigus vulgaris market projected to grow at approximately 8% CAGR during the assessment period (2018-2027).

How much is the global pemphigus vulgaris market worth in the future?

The valuation of the global pemphigus vulgaris market is estimated to increase to USD 677.99 MN by the end of 2027.

What are the major tailwinds pushing the growth of the global pemphigus vulgaris market?

Rising prevalence and higher awareness regarding the disease and advancements in diagnosis & treatment process are major tailwinds pushing the growth of the global pemphigus vulgaris market.

Which region holds the largest share in the global pemphigus vulgaris market?

North America holds the largest share in the global pemphigus vulgaris market, followed by Europe and the Asia Pacific, respectively.

Who are the top players in the global pemphigus vulgaris market?

The Global Pemphigus Vulgaris Market is characterized by the presence of many global, regional, and local vendors. There are many large and small players are operating in the global pemphigus vulgaris market. The market is highly competitive with all the players competing to gain market share. Rising competition, rapid advances in technology, frequent changes in government policies, and environmental regulations are key factors that confront market growth. The manufacturers compete based on cost, quality, and reliability. It is decisive for the manufacturers to provide cost-efficient and high-quality products, to survive and succeed in an intensely competitive market environment. Some of the top players in this market are F. Hoffmann-La Roche, Argenx SE, Pfizer Inc., and Novartis AG which holds the significant market share.

Hoffmann-La Roche a Swiss multinational healthcare company headquartered in Switzerland. The company is involved in producing differentiated solutions for oncology, immunology, infectious diseases, ophthalmology, and diseases of the central nervous system. The company also provides innovative diagnostic tests and medicines which will help patients around the world. In February 2018, F. Hoffmann-La Roche announced that the US Food and Drug Administration (FDA) has accepted the company’s Supplemental Biologics License Application (sBLA) and granted priority review for the use of MabThera/Rituxan (Rituximab) for the treatment of pemphigus vulgaris (PV), a rare, life-threatening condition characterized by progressive painful blistering of the skin and mucous membranes.

Argenx SE is a Zwijnaarde based company. It is a clinical-stage biotechnology company developing a deep pipeline of differentiated antibody-based therapies for the treatment of severe autoimmune diseases and cancer. The company focuses on developing product candidates with the potential to be either first-in-class against novel targets or best-in-class against known, but complex, targets to treat diseases with significant unmet medical needs. In March 2018, the company announced the expansion of its pipeline with the addition of complement-targeted ARGX-117 for the treatment of severe autoimmune diseases.

Pfizer Inc. is one of the top pharmaceutical company headquartered in the US. The company is involved in developing wide range of medical disciplines that include immunology, oncology, cardiology, diabetology/endocrinology, and neurology. Pfizer operates in countries such as Germany, France, Greece, Korea, Mexico, Russia, the Netherlands, India, Poland, Turkey, Israel, China, and others. In December 2016 the company received the US Food and Drug Administration (FDA) approval for EUCRISATM (crisaborole) ointment applicable for the treatment of atopic dermatitis (AD). EUCRISATM (crisaborole) is a non-steroid ointment that prevents the Phosphodiesterase -4 enzyme in the skin.

Novartis AG holds a strong position in pharmaceutical industry. The company is engaged in new product launches and strategic acquisitions to rise there its market presence. In January 2018, the company receives the US FDA approval for Promacta (eltrombopag) which is used for the treatment of severe aplastic anemia (SAA) as a first-line therapy.

The growth of pemphigus vulgaris market is dependent on the market conditions, government support, and industry development. Thus, the companies are focusing on expanding geographically, collaborations, product launches, mergers and acquisitions and improving their products.