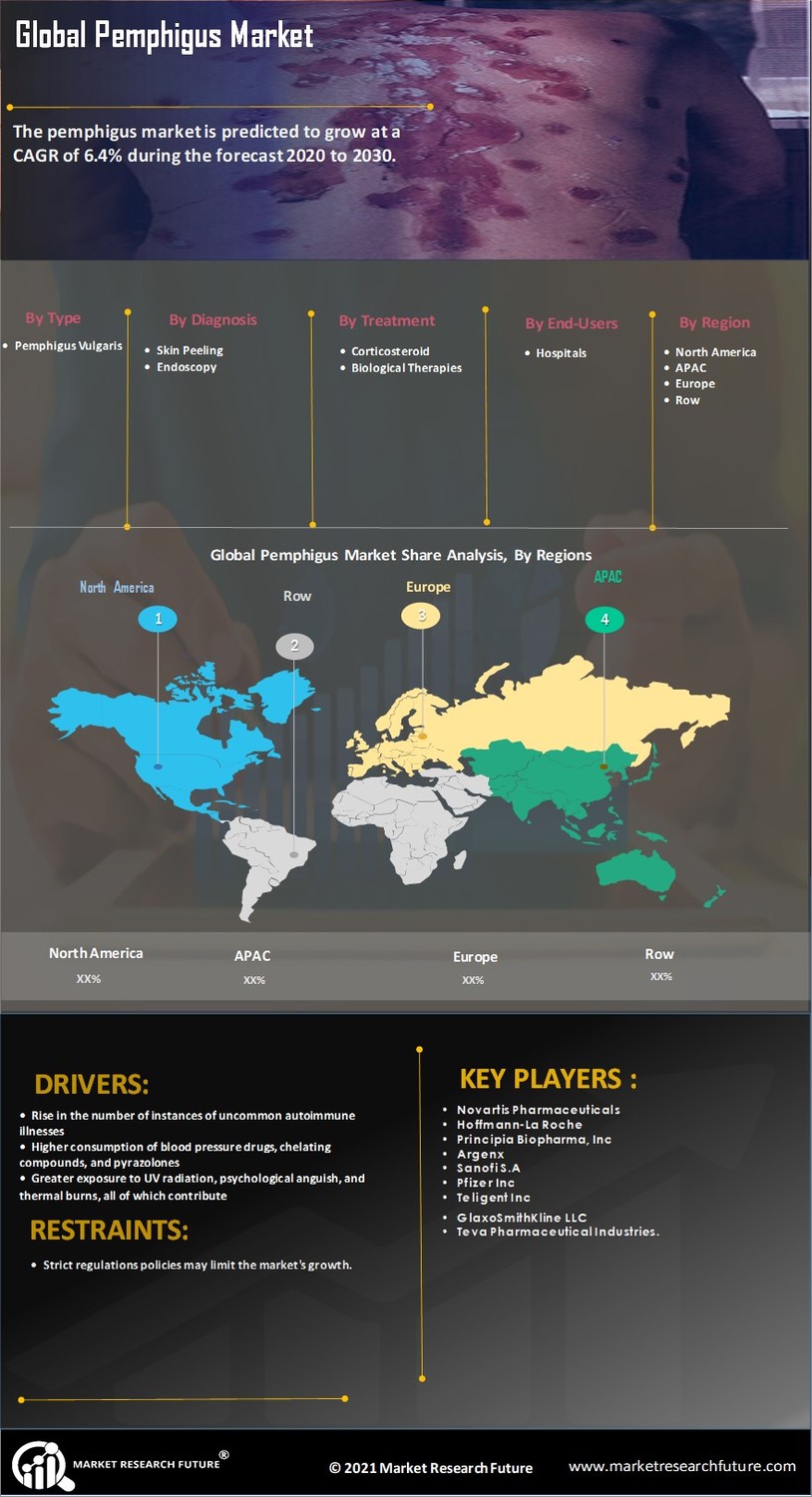 According to the latest research report, the global pemphigus market size is predicted to increase at a high rate over the projected period. According to market research analysts, the pemphigus market is predicted to grow at a compound annual growth rate of a CAGR of 6.4%  during the projected timeframe from 2020 to 2030. Pemphigus is an inflammatory illness that affects the immune system. It is a collection of uncommon skin conditions that produce blisters and ulcers in the mouth, skin, and genitals, among other symptoms. In pemphigus, the immunological system creates antibodies that are wrongly directed against healthy tissue in the skin and mucosa. It may arise as a secondary effect of medicine after eating certain blood pressure medications.

The rising incidence of cancer, increased tobacco usage, addictive personality, increased pollution, growing elderly population, and increased knowledge about oral hygiene are all expected to contribute to the development of this market in the coming years. Pelagius condition affects around 2,500 persons in the United States, according to the International Pemphigus and Pemphigoid Foundation (IPPF). In addition, it was discovered that there were 40,000 to 50,000 cases of pemphigus in the globe in the year 2017.

This report contains all the information on the global pemphigus market analysis and its strengths. The report also contains the culmination of dynamics, segmentation, key players, regional analysis, and other essential factors. And a detailed analysis of the pemphigus market forecast for 2027 is also included in the report.

COVID19 had a significant impact on a wide range of industries, including restrictions on shipping and logistics, as well as foreign bans. In addition, the outbreak created a situation where both commercial and industrial enterprises were shut down for an abnormally long period of time. This resulted in financial instability and has affected the pemphigus market value as well.

Pemphigus market growth is being driven by a rise in the number of instances of uncommon autoimmune illnesses, as well as higher consumption of blood pressure drugs, chelating compounds, and pyrazolones. Pemphigus market growth is further boosted by greater exposure to UV radiation, psychological anguish, and thermal burns, all of which contribute to the disease's spread.

In addition to advancements in the management of autoimmune illnesses, an increasing number of people suffering from autoimmune system illnesses, including myasthenia gravis and thymoma, throughout the globe will propel the worldwide pemphigus market forward.

Although several factors are driving the market, considerations such as rapidly increasing health expenditures, an increase in the total count of research and innovation, an unfavourable cost recovery environment, and strict regulations policies may limit the market's growth during the period of assessment.

During the time under consideration, an unfavourable cost recovery environment, as well as rigorous regulatory rules, may create challenges for the market's expansion.

In terms of market share, Europe is trailing behind the United States. It is predicted that the existence of nations such as France, the United Kingdom, Germany, and others would help to propel the growth in the region ahead. The increasing number of persons of Mediterranean heritage in these two locations is causing a substantial growth in the percentage of people afflicted by the illness within those two areas.

The market has been categorized according to treatment into corticosteroids, initial therapy, and maintenance therapy. Immunosuppressive drugs, biological treatments, intravenous immunoglobulin (IVIG) therapy, and other medications are used to treat the condition. The end-user market is divided into four categories: academic and research organizations, hospitals and clinics, labs, and others.

The market is segmented based on the kinds, diagnosis, therapy, end-users, and regions. The global pemphigus market trends is expected to witness decent growth during the forecast period.

The market is segmented into academic and research organizations, hospitals and clinics, labs, and others based on the propulsion types.

According to the reports, the pemphigus market has been broken down into the Americas, Europe, Asia-Pacific, and the Middle East & Africa regions by geography. Due to the rising number of older populations, increased government spending on dental hygiene, the availability of disposable money and the rising use of tobacco in Europe, Europe is predicted to be the 2nd biggest pemphigus market share in the world. In the year 2017, occurrences of pemphigus documented by the Europe PMC ranged from 0.5 instances per million inhabitants in Germany to 8 occurrences per million population in Greece, with a total of 1.6,16.1.

Pemphigus and other dental health issues are developing in emerging nations, where people have more disposable money and can afford to spend more on healthcare coverage. Emerging economies in the Middle East and Africa are predicted to have the smallest share of the worldwide pemphigus market outlook due to lack of expansion, lack of technological understanding, and insufficient healthcare centres.

Several participants in the worldwide pemphigus market have shown a strong interest in advancing their prospects by strategically improving their competitive position.

Pemphigus is a group of rare autoimmune skin disorders that cause blisters, sores on the skin, in the mouth, or on the genitals.

What is the CAGR of the Pemphigus Market?

What is the major driver for the Pemphigus Market?

The increasing prevalence of cancer is likely to be a major driver for the Pemphigus Market over the forecast period.

Which is the leading regional Pemphigus Market?

Americas are anticipated to dominate the global Pemphigus Market.

What are the leading Pemphigus Market players?

Leading players in the market include Novartis, Principia Biopharma, and Pfizer, among others.

Pemphigus Market: The increasing prevalence of cancer and oral-related problems are projected to ...