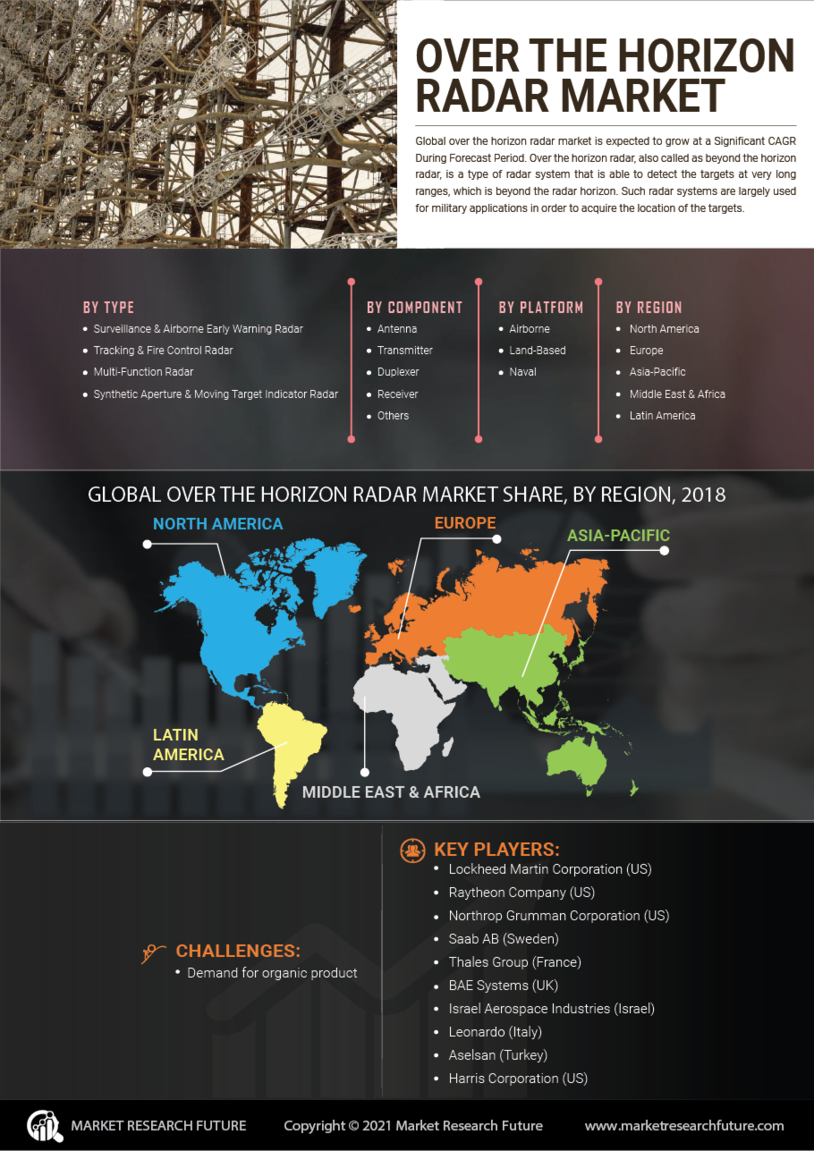 Over The Horizon Radar Market Scenario

Over the horizon radar, also called as beyond the horizon radar, is a type of radar system that is able to detect the targets at very long ranges, which is beyond the radar horizon. Such radar systems are largely used for military applications in order to acquire the location of the targets. They have the ability to detect, intercept, and follow the target at static or a moving condition. These radar systems use satellite-based communication that works on the frequency bands namely VHF-band, UHF-band, and L-band. Apart from the military applications, these radar systems are also used for some commercial purposes such as air traffic control, vehicle speed detection for law enforcement, and weather monitoring, among others.

Over the past two decades, the nature of warfare has changed significantly. In the recent years, the defense authorities of several countries are engaging in the development of military equipment that support the armed forces, during the military operations. As tactical surveillance and monitoring have become key tools in the military day-to-day operations, several defense authorities employ the long-range radar systems, in order to ensure proper situational awareness among the military personnel. These radar systems are largely used to track down the terrorists and other members of the Islamic State (IS). For example, countries such as the US and Russia, along with the North Atlantic Treaty Organization (NATO) have been making use of these radar systems to track and neutralize the IS threats.

Of late, a number of companies have been investing on the development of advanced military equipment such as the 3D radar systems. These radar systems provide enhanced weather data and offer accurate results in recognition and detection of the targets. As a result, these radar systems are expected to replace 2D radar systems over the next few years, particularly, in the military and meteorological sectors.

On the basis of region, the global over the horizon radar market has also been segmented into five regions, namely, North America, Europe, Asia-Pacific, Middle East & Africa, and Latin America. North America had the largest share of the market in 2017, primarily due to the large focus of the region, particularly the US, on the provision and sustenance of the national border security. Furthermore, the presence of the key companies such as Lockheed Martin Corporation, Raytheon Company, and Northrop Grumman Corporation in the region, results in a high development of the over the horizon radar systems. Similarly, Asia-Pacific is expected to be fastest growing market for the market, during the forecast period. This is primarily due to the rising terror attacks, political disputes, and cross-border conflicts in the region, particularly in China and India. Therefore, the global market is estimated to register a CAGR of over 13% during the forecast period of 2018 to 2023.

Segmentation of the Global Over the Horizon Radar Market

The report on global market by Market Research Future covers extensive primary research. This is accompanied by a detailed analysis of the qualitative and quantitative aspects by various industry experts and key opinion leaders to gain deeper insights into the market and industry performance. The report offers a clear picture of the current market scenario, which includes the historical and forecast market size, in terms of value, and the technological, macroeconomic, and governing factors of the market. The report also provides comprehensive information about the strategies of the top companies in the industry, along with a broad study of the different market segments and regions.

What is the estimated growth rate of the global over the horizon radar market?

Over the horizon radar market 2020 is projected to register a moderate 13% CAGR in the forecast period.

Which factors are likely to drive the market over the review period?

The upsurge in the number of advanced military radar systems globally is anticipated to increase the global over the horizon radar market growth over the prognosis period.

Which type is expected to witness the highest growth?

The surveillance and airborne segment is expected to observe substantial demand over the review period.

What is the component segment of the global over the horizon radar market expected to witness the highest growth?

The transmitter segment is slated to expand as the fastest-growing segment.

Who are the significant players operative in the global over the horizon radar market?

Over The Horizon Radar Market Report - Global Industry Forecast To 2023