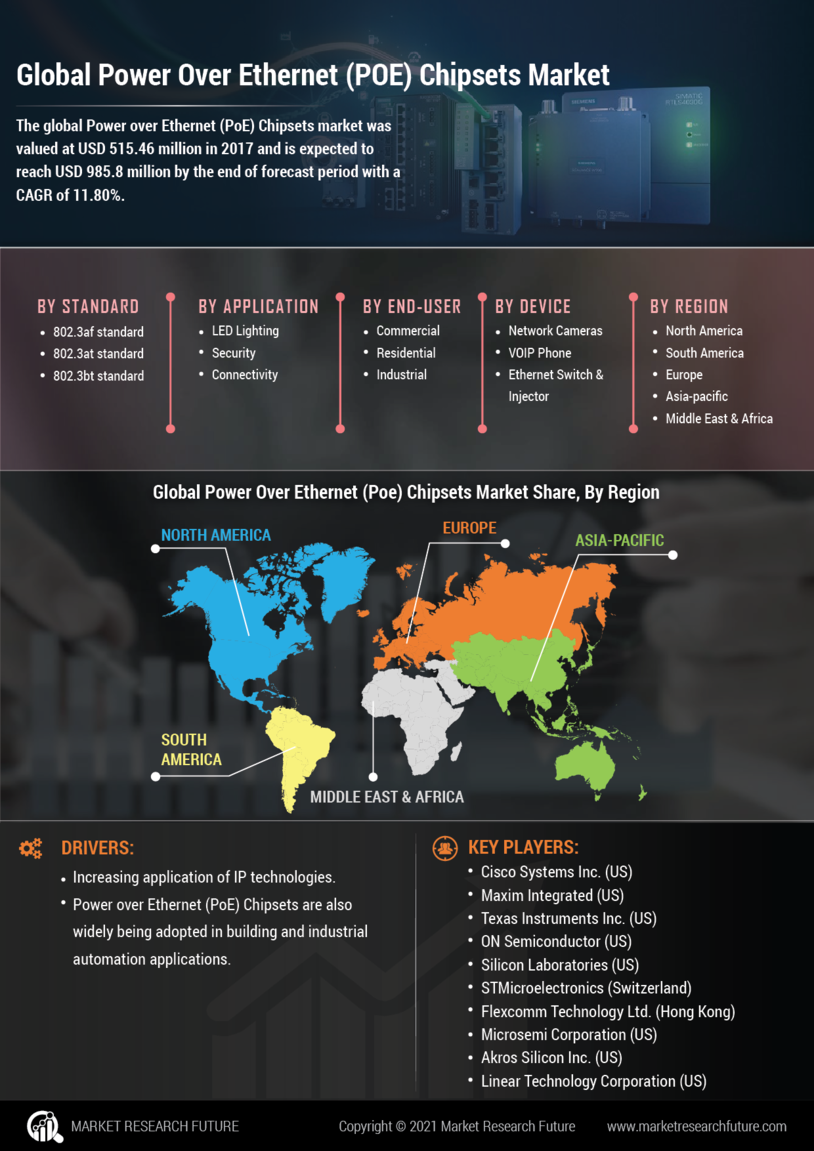 The rapid growth of various industrial verticals is propelling the adoption of information protocol (IP) telephony globally. This acts as a key driving factor of the Power over Ethernet (PoE) Chipsets Market growth. The great usage of network security cameras, integrated with wireless access points and ethernet-based radio frequency identification readers drives the market’s demand. The advanced developments for energy-efficient PoE solutions for high-power devices are another primary driving factor.

The Power over Ethernet (PoE) Chipsets have various benefits. It is an essential component for convenient maintenance, reduction of downtime infrastructure management, and flexibility enhancement and affordability. The adoption of advanced technologies such as Industrial Internet-of-Things (IIoT) in smart buildings, factories and industrial networks integrated with automation is boosting the demand for chipsets. The rising significant infrastructural developments in developing economies and the usage of big data analytics and cloud-based systems will contribute to the market’s growth.

The sudden outbreak of the covid 19 analysis has been affected by the Ethernet PHY chip and has been forcing the major production that reduces the output for shut down at some time. Hence, it represents the various supply components that provide the expenses for the production at a high pace. Hence, this initiates to portray the emerging challenges along with the new challenges in the covid session. Thus, it can be stated that the alternative access of the Power over Ethernet (PoE) Chipsets Market has been centralized to countermeasure the alternative impact. Therefore, the ethernet market has been returning that subsequently outbreaks the revenue to be graded virtually.

The key market opportunity has been idolized by the increased application of the chipsets within  the advanced electrical centers, along with the basic infrastructure and the supply of the electric power for surveillance and media entertainment segments. Apart from that, the rapid adoption of PoE has been idealised by the stated sectors that propels the growth of the Power over Ethernet (PoE) Chipsets Market. Hence, the development of the data has been transferred by the ways that hold a position of USD 514 million within the electrical sector.

An increase within the restarting factors has been in a  limited section that regulated the  electronic slanted for the consumer segments within the system. Hence, the increment in the transfer of the data through electrical infrastructure has been executed. The focusing aspects of the stated center have been simplified to lower the cost of the overall segments.

Challenges appear to be endurance and the high technological application of the high speed data connectivity within electrical infrastructures. Further, the technological disputes detection has been concise that analyses the high precision and adoption to look for itself.

The Power over Ethernet (PoE) Chipsets Market has been growing and is expected to reach nearly USD 985.8 million within the concise industry. Hence, the CAGR appears to be 11.80%  and the market size in 2017 was calculated to be 525.46 million. On the other hand, the Power over Ethernet (PoE) Chipsets Market growth  has increased due to the high demand and during covid, the growth was expected to rise even more with outstanding opportunities within the global market.

The research analysis on the concise market has been based upon the Power over Ethernet (PoE) Chipsets Market along with the innovative technology that have been used in different perceptions. Further, the applications of the industrial automation have been detected that provide advanced solutions as well Therefore, it has been detected that the stated electrical infrastructure has abbreviated the formulation of the different perspective that mainly includes the various purposes of ongoing technological application along with the new technologies for better effective effect on the stated market.

The segmentation of the Power over Ethernet (PoE) Chipsets Market has been based upon the standard segments, application segments, regional segments and end user segments. However, it has been assisted that the PoE chipset has been segmented into 802.3 af standard and 802.3 bt standard. Hence, it has been observed that through application, the PoE chipset market has been segmented into LED lighting, connectivity, security and other segmentation. Hence, this appears to portray that the overall marketing has been into commercial, industrial and residential. Moreover, it has been formalized that the commercial segmentation has been bifurcated that mainly includes healthcare, office buildings, hospitality and the retail management. The standardization has been bifurcated that mainly includes the new devices, cameras, network and the ethernet switch. This initiates the importance of the data rate and the transfer of the data through different stated market segmentation. It has been depicted that the segment growth has been likely to get a rise at 14% and has been estimated to make a growth by the forecast period for the future in the long run.

According to global market research, it has been observed that the PoE chipset market growth has been estimated to make a significant rate during the forecast period from 2017 to 2023. Apart from that, the geographical analysis of the PoE chipset has been studied for analyzing Europe, Asia Pacific, and North America. it has been objectified that North America has been expected to dominate the PoE and has been owned for the technologically advanced infrastructure. further, it has been followed up by the Asia Pacific regions, which has been expected to make the experience with high penetration and the high driving growth attempts to increase the demand for the wireless technologies. Government regulation has been increasing the internet penetration within the developing countries such as India and the entire advancement within the networking technologies. The important factor has been boosted up and has been outgrowing the PoE within the Asia-Pacific regions.

According to the recent update, the new companies that have been joining the market of the particular company have created a scenario for new innovations, and the strategies.

ROCKPi Trading Limited revealed its samples in the market for their ROCK5 Model B single-board computer. The company accepts pre-orders at discounted prices starting at USD 79 through distributors.

This particular report is entitled to provide all the important facts and information regarding the growth of the largest market share of the Power over Ethernet (PoE) Chipsets Market within the forecast period. Apart from that, the different section has been available that helps to get within the depth information that includes mainly the opportunities, drivers, challenges, regional analysis, covid 19 analysis. Market segmentation, and others. Therefore, all of the facts collected have been from the primary and the secondary sources that are entitled to provide information regarding the application of the electrical automation with technological processing in the future growth of the PoE chipset market.

What will be the difference in the market value from 2017 to the end of the review period?

State some of the significant factors boosting the market growth?

Some of the significant factors boosting the market growth include the rising application of IP technologies like telephony coupled with the surging deployment of Ethernet-based RFID readers as well as network security cameras all over the world.

What are the primary devices that make use of PoE chipsets?

How is the APAC market expected to do during the appraisal period?

Government regulations aiming to boost the internet penetration in developing countries like India and China coupled with the advancements in networking technologies ensure that the APAC market does well during the appraisal period.