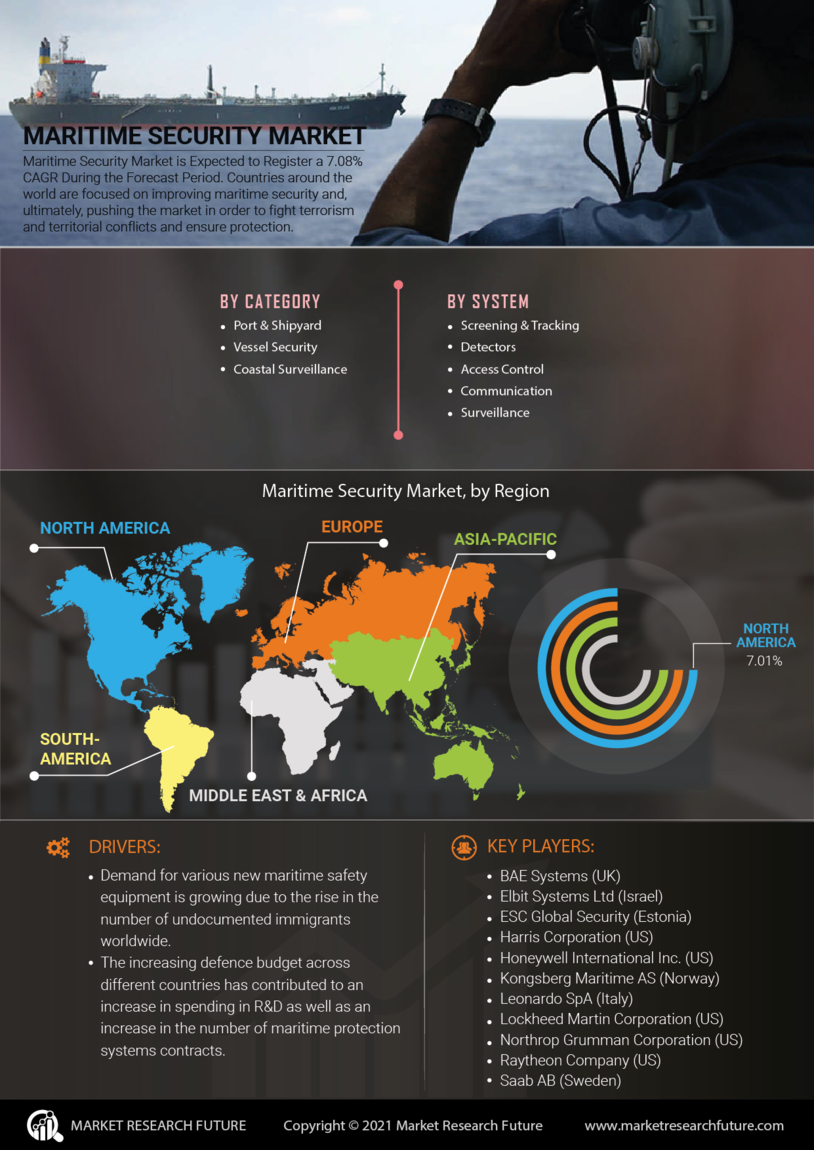 Protecting ports, ships, and another shipping infrastructure against malicious destruction brought on by sabotage, terrorism, or subversion is the focus of maritime security. Studies show that the naval network carries out most of the global trade. As a result, many naval nations in Asia are expanding their investments in substantial port expansion and construction projects. This will increase the demand for screening, scanning, and surveillance technology over the following years. Additionally, as the global need for maritime security grows, criminal activities such as illegal immigration, drug trafficking, and attacks on ports and coastal areas are rising. Numerous maritime security-related issues, such as the threat of pirates, are receiving global attention and have also been the subject of international conflicts, particularly in China.

The US is eager to work with Bangladesh on various marine security-related concerns, including battling illegal fishing. This was discussed during a meeting between the visiting US assistant deputy secretary for Central and South Asia and the foreign ministry's maritime affairs secretary.

Global trade and the economy have both been severely impacted by the Covid-19 outbreak. Certain areas of the maritime industry have been touched, albeit to incredibly different degrees. This is partly due to the existence of specific activity types, the adaptability of individual organizations, and their disaster management plans.

The COVID-19 pandemic is a dynamic phenomenon with significant effects on the transportation sector. Security-aware vessels will remain able to trade, but secure trading will require dependable, real-time, data-driven technology.

Therefore, a drop in piracy accidents is impossible, and a partial rise is very likely given the increased likelihood that protection responses will be compromised due to widespread infection. In this time of uncertainty, it is critical for ships, ship owners, and the marine industry to rely on straightforward, data-driven, and practical solutions. This will encourage economic activity in this new environment.

The market for maritime security is driven by rising investment in research and development (R&D), a growing emphasis on maritime security, and a surge in international seaborne trade. Furthermore, technical advancement and developing integrated solutions are two of the global market's potential growth drivers. The introduction of intelligent container shipping containers outfitted with sensors to track and report data will tremendously assist the market.


Due to increasing unauthorized immigration, there is a surge in demand for additional marine safety equipment. Electronic barriers, underwater acoustic weapons systems, EO detection systems, MIRA Autonomous Control Equipment (MACE), and advanced defense systems are among the automated systems that are in more demand. Additionally, there has been a massive demand for small satellites to monitor maritime ships. There has been an expenditure growth in R&D and the number of contracts for marine protection systems because of the rising defense budgets in various nations. Vendors focus on supplying improved sensors, communication systems, more advanced weaponry, stealth uncrewed underwater vehicles (UUVs), and threats from underwater smuggling. Moreover, the market has seen a movement in favor of entirely cost-effective uncrewed surface vehicles (USVs).The C295 will soon be produced at the new Vadodara plant, but it won't have the same range as the P-8l that the Indian Navy currently uses for intelligence, surveillance, and reconnaissance (ISR). Its 1500 km range will still enable it to support P-8I across the Bay of Bengal and the Arabian Sea if stationed nearby the islands. With a 12–18 aircraft fleet, this C295 could cover the Indian Ocean Region (IOR) in an 80-degree arc. This cutting-edge multi-mission aircraft is based on the CN-235 transport aircraft, which served as the foundation for the C295 and was created through a partnership between Spain and Indonesia. This aircraft integrates a straightforward design with a strong airframe, has a pressurized cabin, and complies with global airworthiness standards. The cockpit improves pilot workload while increasing spatial awareness and flight safety, increasing mission performance. The idea of modular architecture also makes it possible to integrate equipment following anticipated future growth.


Pirates have recently been attacking vessels on the West African route at a record frequency for over 15 years. Although the Gulf of Aden and the Indian Ocean are less prone to attack, these are still lucrative pirate havens. However, there are longer routes, and more fuel is needed to cover them. The customer must pay for the extra energy, but marine safety has been reinforced in areas with a high risk of piracy. Some technologies can help identify people involved in terrorist networks. This will allow countries to capture and arrest these terrorists before they can cause any harm. Expanding problems with piracy restrain the growth of the market.


The need to protect against new, developing risks has grown, including cyber attacks, the quick expansion of global sea trade, and regulatory compliance with the marine business. The market is being driven by the different rules and regulations for better integrating and regulating maritime security, which is crucial in coordinating international trade by sea. The market may have considerable growth opportunities due to technological advancements and the successful integration of new technologies, such as intelligent containers, with existing ones, such as GPS tracking.

Based on the system, the global maritime security market has been divided into screening and scanning, communications, surveillance and tracking, access control, and detectors. The detection technologies and systems segment will expand at the fastest CAGR. Laser range finder systems are quickly replacing traditional methods due to their efficiency and precision. However, the surveillance and tracking segment has the most significant proportion of the maritime safety industry due to the continuously expanding demand for video and underwater monitoring equipment and services in this sector.

By Threats and Vulnerabilities

Based on threats and vulnerabilities, the global maritime security market is divided into deep water security and perimeter security. The deep-water part would most probably be more significant. Deepwater defense devices cover both the underwater and above-water perimeters.

By application, the global maritime security market has been segmented as port and shipyard, vessel security, and coastal surveillance. Due to greater threat susceptibility, vessels are most significantly expected to account for the most outstanding market share over the projection period. Furthermore, port and shipyard development will likely occur at the highest CAGR during the projected timeframe.For a few port facilities, the Norwegian Coastal Administration has increased marine security to level 2. The Norwegian Coastal Administration has agreed to enhance marine security to level 2 for a few port facilities as of September 30 and until further notice due to the increased threat level. Calling ships are subject to the same level of security as port facilities. As a result, the ships will have to increase their security to match the ports of call.

By region, the global maritime security market has been divided into North America, Europe, Asia-Pacific, and the Rest of the World. North America accounted for the largest market share. Asia-Pacific is projected to exhibit the highest CAGR during the review period.

North America is expected to be the region with the most significant demand for maritime defense. The North American market for marine protection is anticipated to grow throughout this time. The North American economy is growing due to the US government's attempts to defend itself against dangers such as illegal trafficking, insurgency, piracy, and cyber attacks. In addition, Canada is a significant marine nation, which is crucial to the expansion of its economy. The Canadian government's policies focus on control, supervision, and regulation for the security of its maritime industry. Such elements are anticipated to support the growth of the marine protection sector in the area.

The Asia-Pacific area is predicted to expand at the fastest rate. China is at odds with numerous Asian nations vying for control of the Spratly Islands. Fueling such unhealthy inter-national tensions, the region needs answers for marine security. Additionally, the increase in the defense budgets of nations such as China and India has prompted more research and development in marine protection technologies by some vendors. The market for Asia-Pacific maritime safety is therefore anticipated to grow throughout the forecast period due to all the aspects above.To provide a legal framework that provides complete effect to IMO regulations dealing with maritime security IMO is aiding the Ethiopian Maritime Authority (EMA). This is a program activity for the "Regional Programme for Maritime Security in the Red Sea Area," supported by the EU. According to the 2050 Africa's Integrated Maritime Strategy, the IMO hopes to help participating nations improve the maritime safe and secure environment in the Red Sea Area through this program. To create national legislation giving thorough and total effect to the pertinent maritime security measures, in addition to the goals of the Red Sea Programme, IMO seeks to sensitize national stakeholders to the content of the IMO circular, Guidance on the advancement of maritime security legislation.

To identify and estimate the market size for the global maritime security market segmented by system, threats, vulnerabilities, and application by value (in US dollars). Also, to understand the consumption/ demand created by consumers of maritime security from 2022 to 2030

To identify and infer the drivers, restraints, opportunities, and challenges for the global maritime security market

To find out the factors which are affecting the sales of maritime security among consumers.

To provide a detailed insight into the major companies operating in the market. The profiling will include the company’s financial health in the past 2-3 years with segmental and regional revenue breakup, product offering, recent developments, SWOT analysis, and key strategies.

What is the growth rate of the global maritime Security market?

The global maritime security market is growing at a CAGR of ~6.78% over the next ten years

Which region has the most significant global maritime security market share?

Who are the key players in the global maritime security market?