The global Optical Encoder Market is anticipated to grow at a 8.70% CAGR during the ongoing forecast period of 2022-2030

The optical encoder market size is expecting to increase during the ongoing forecast period of 2022-2030. During the historic forecast period that ended in 2020, the market closed its operations by attaining a final market valuation worth USD 1.18 billion. With the rising trends and emerging opportunities, the global market is anticipated to grow at a 8.70% CAGR during the ongoing forecast period of 2022-2030 and hence, help the market reach a final market valuation worth USD 3.86 billion by the end of the forecast period in 2030. One of the major reasons for the positive attributes and market growth during the period is the developing need for high-end automation across various kinds of industries and verticals. Also, the market operations during the forecast period are likely to witness a momentous and huge growth in the adoption of Industry 4.0 which has excellent opportunities to offer to the optical encoder market and thus, help the market grow as per the predictions laid down by the market leaders and industry experts for the ongoing period ending in 2030.

The pandemic has introduced various kinds of struggles for companies functioning in both the regional and international markets. Hence, both the regional markets, production units, manufacturing industries, and the global economy since the initial cases were reported and to curb the growth, the governments of both the developing and developed nations had imposed temporary and permanent lockdowns. Along with the lockdown, many regulations were imposed that were related to the temporary shutting and suspension of both international and domestic travel, exports, and imports which have resulted in disrupting the supply chain mechanism that is prevalent as a part of the global optical encoder market regions. The world economies that were smoothly functioning before the pandemic and had set organizational goals and objectives to meet are now trying to get their hands on the best technology and advancements to implement in their functioning to recover the losses incurred during the pandemic year of 2021 and hence, emerge as dominant players by the end of the forecast period in 2027. The production capacity of the industries and production units have been limited as the rising cases resulted in a shortage of raw material and this unavailability is creating issues for the producers to meet the market demand and supply as per the requirement. The arrival of the pandemic has forced the companies to shut their manufacturing units as well.

The government and the key market players are collaborating to increase the investment quantum for the development of products and services that will help in enhancing the optical encoder market visibility and accomplish the demand rendered by the target audience across the global regions. Also, the market players are opening their doors to enter into mergers and collaborations to cater to the demand of the audience that is located outside the regional market to improve their global presence and generate international investments.

The market trends are expected to witness a growing inclination of the target audience that is spread across various global regions towards the availability of advanced technologies even though the pandemic is on a rise and there is a high rate at which the cases are being transmitted among people, states, countries and escaping the international borders, as well. Most of the manufacturing players and units functioning across various global regions are developing a dire need for automation and hence, this is emerging as one of the major factors that will drive the global optical encoder market growth as per the formulated predictions during the forecast period that ended in 2030. Automation for encoders helps in improving the overall effectiveness of equipment by rendering its assistance in monitoring the energy levels alongside the working conditions of machines.

However, the global optical encoder market operations are subsequently witnessing various problems and issues that might end up forming as restraints during the growth process undertaken by the prominent market players by the end of the forecast period in 2030. Achieving and maintaining a high degree of accuracy, rising variations in the international regulations, and risks related to mechanical failures while functioning in the harsh environments is likely to present restraints for the market and thus, bar the market from expanding amongst end-users, industry verticals, and trends that are likely to prevail during the ongoing forecast period of 2022-2030.

Constant connectivity with the production lines is an important requirement that is prevailing across a series of functional units and markets like the food and beverage industry, medical, healthcare, pharmaceutical units, chemical industries, and the automotive sector. The mid-sized manufacturers are implementing the solutions at a high scale. Encoders are on their way to adopt these market services on a large scale that ensure better implementation and utilization of assets, and further, rendering support in minimizing the errors and maintaining the quality of the end-products available to the target audience.

The optical encoder market is home to various markets segments that are functional in different global regions. To help the market investors, traders, and vendors, render a better investment and return experience, it is better to understand the revenue potential possessed by the market segments. Also, the mar optical encoder market ket segments and the revenue collected by them can help in enhancing the final valuation of the global market during the forecast period that ends in 2030. The global market has been segmented based on the following:

The encoder type segment of the global optical encoder market includes both linear and rotary types.

The signal type segment of the market is further, bifurcated into incremental and absolute parts.

The technology segment of the global optical encoder market includes verticals like magnetic technology, optical technology, and inductive technology amongst the others available in various regional parts of the global market and will be put to use to carry out the market operations during the forecast period that will be ending in 2030.

The application segment of the global optical encoder market includes end-users like textiles, industrial, consumer electronics, power, automotive, food and beverages, aerospace, printing, and textiles amongst others, and thus, expand the area of market service during the forecast period that will be ending in 2030. 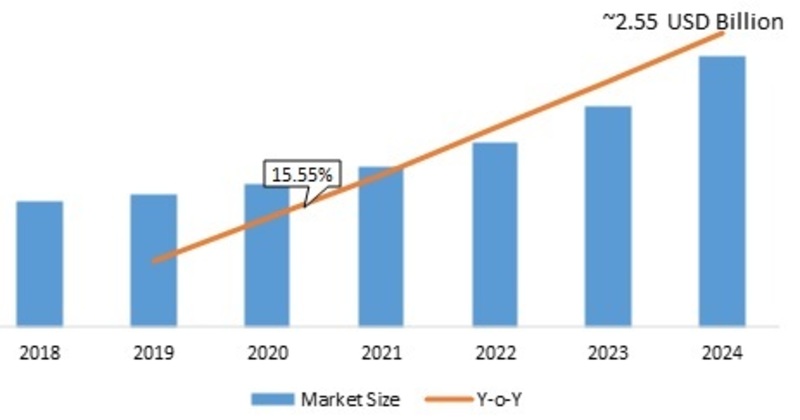 The largest optical encoder market share is likely to be enjoyed by the APAC regions amongst the rest in competition. The main reason behind this is the increasing number of manufacturing and engineering hubs that are related to various functional industries. The concept is largely present in China, as a part of the APAC region. The target audience is largely demanding energy-efficient products and is open to various kinds of feedback. These factors will help in the creation of excellent opportunities for the global growth of the optical encoder market during the forecast period that ends in 2030.

The global optical encoder market report helps in providing valuable market insights that will play a vital role in the expansion of the market operations during the forecast period that ends in 2030. The report helps in understanding the revenue potential in the market segments and the competitive degree that prevails amongst the market players belonging to various regions on a global scale. The report discusses the impact of the pandemic and the recent optical encoder market developments undertaken to incur the losses because of the pandemic.

Which type-based segment can attain the leading spot in the global market?

The absolute optical encoder segment can attain the leading spot in the global market.

What makes 2 channel the top segment in the market?

2 channel encoders have the ability to channel two quadrature signals efficiently and in most cases, an additional index signal as well, which boosts their demand in the market.

Who are the main end-users in the global market for optical encoder?

What actions are being taken by players that help induce market growth?

Most of the players are adopting growth strategies like mergers, partnerships, product innovation and acquisitions in an attempt to elevate their product offerings and also increase their reach across various geographies.