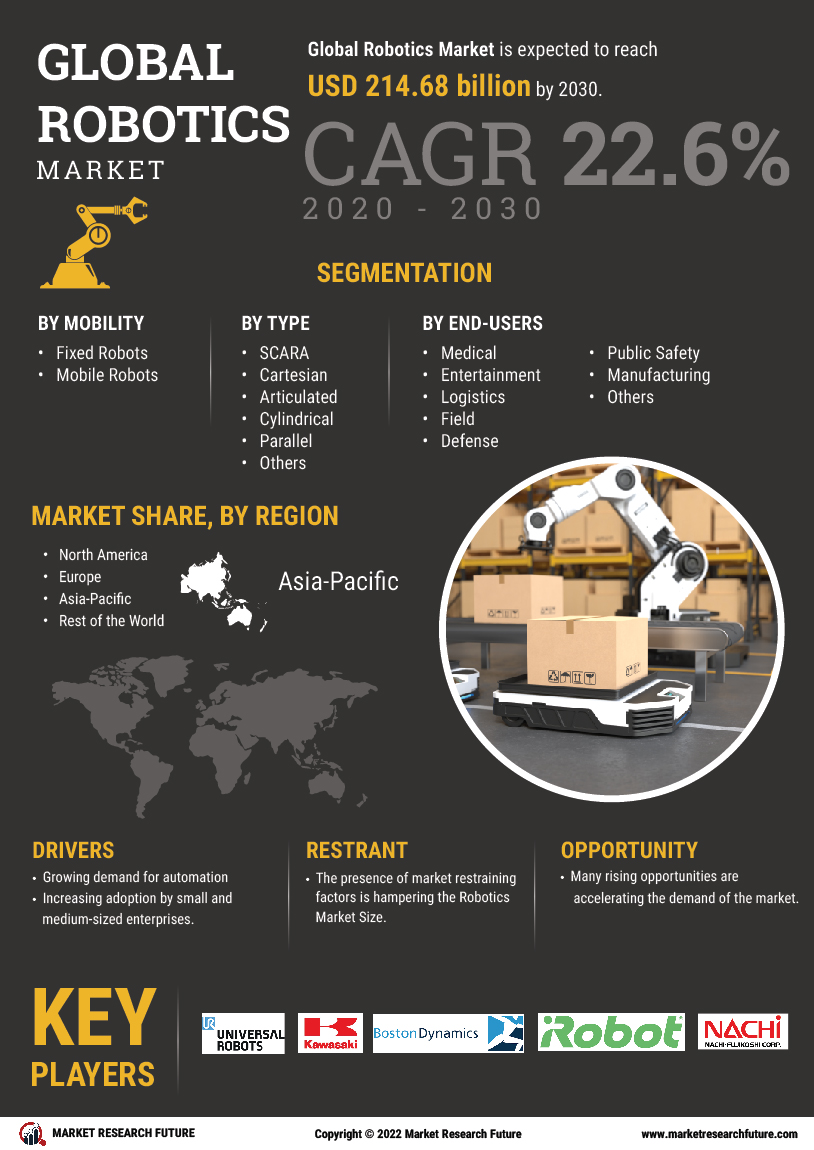 Robotics Market Size was valued at USD 41.5 billion in 2021. The robotics market industry is projected to grow from USD 50.96 billion in 2022 to USD 214.60 billion by 2030, exhibiting a compound annual growth rate (CAGR) of 22.80% during the forecast period (2022 - 2030). Growing demand for automation and increasing adoption by small and medium-sized enterprises are the key market drivers enhancing market growth.


The increasing number of investments and funding in the technology sector is one of the main reasons for boosting the growth of the robotics industry. According to the World Robotics report by the International Federation of Robotics, investments in new vehicle production technologies and the modernization of industrial regions have increased the demand for robots. Additionally, the worldwide market is expanding due to the spike in demand for industrial robots. For instance, BMW AG and KUKA inked a contract in 2020 to deliver over 5,000 robots to new production lines and factories worldwide. According to KUKA, these industrial robots will be used globally at the overseas manufacturing facilities of the BMW Group to produce both current and future vehicle models.

Robotics innovators and developers attend these exhibits to secure money for R&D from investors and industry executives. For instance, Bossa Nova Robotics, a maker of shelf-scanning robots, has secured about $40 million from investors to create cutting-edge technologies that would aid in the efficient operation and commercialization of shelf-scanning robots. Additionally, the market is expanding quickly; thus, many new start-ups are joining. Other innovators are employing similar tactics as well. Such initiatives are anticipated to enhance the robotics market during the projected period.

The market's product innovation rate is further accelerated by the rising number of surgeries supported by medical robot systems. In August 2022, the Da Vinci Xi Surgical Robot, one of India's most cutting-edge technology, was introduced at Max Super Speciality Hospital, Mohali. The introduction of the ground-breaking Da Vinci Xi Surgical Robot is just another patient-focused move made by healthcare providers to give patients access to high-quality medical care, enhancing the robotics market CAGR across the globe in recent years.

Domestic work robots made up the largest group of consumer robots, according to IFR 2022. Recently, sales of about 19 million copies (+12%) occurred. Currently, the most common uses for robots are vacuuming and other interior home floor cleaning. Since every convenience shop carries this service robot, customers may reach it. These advancements may further fuel future market expansion. In addition, in January 2022, ANSCER Robotics, a Bengaluru-based start-up that developed the world's first autonomous mobile robot (AMR) "brain" to democratize robotics technology for everyone, debuted its line of AMRs for the first time at the India Warehousing Show (IWS), which was held at Pragati Maidan in New Delhi, another factor driving the growth of the robotics market revenue.

The robotics market segmentation, based on type, includes SCARA, cartesian, articulated, cylindrical, parallel, and others. The articulated segment held the majority share in 2021 of the robotics market revenue because articulated joint robots can conduct circular motion, which is more advantageous than other motions. A robot with rotating joints is an articulated robot (e.g., a legged robot or an industrial robot). Simple two-jointed constructions of systems with ten or more interacting joints and materials are all examples of articulating robots. Many other sources, including electric motors, are used to power them.

The robotics market segmentation, based on mobility, includes fixed robots and mobile robots. The mobile robots segment dominated the market in 2021 and is projected to be the faster-growing segment during the forecast period 2022-2030. An automated machine with the ability to move about is called a mobile robot. The fields of robotics and information engineering are typically considered to include mobile robotics as a subject. Mobile robots are not confined to a single physical area and can move around in their surroundings. Mobile robots are capable of being "autonomous" (AMR, autonomous mobile robot), which means they can move around freely without any mechanical or electrical guiding systems, positively impacting the market growth.

The robotics market data has been bifurcated by end-users into medical, entertainment, field, logistics, defense, public safety, manufacturing, and others. The manufacturing segment dominated the market in 2021 and is projected to be the faster-growing segment during the forecast period 2022-2030. Robots are employed in manufacturing to do repetitive activities, streamlining the workflow of the entire assembly process. Robots and humans work together to produce products. Numerous tasks are hazardous or involve large amounts of materials, which can be risky for human employees. From 2010 to 2019, the annual installation of industrial robots increased exponentially. Due to great production, constant speed & quality, enhanced workplace safety, and better floor space utilization, industrial robot installation reached up to 381 thousand units globally.

By Region, the study provides market insights into North America, Europe, Asia-Pacific, and the Rest of the World. Asia-Pacific market accounted for USD 18.22 billion in 2021 and is expected to exhibit a significant CAGR growth during the study period. Due to the widespread deployment of robotics, the Asia-Pacific region is predicted to have a sizable market share. Furthermore, due to the extensive deployment of the electronic and automotive manufacturing industries, South Korea and China are prominent in using robots.

The Europe Robotics Market is expected to grow at the fastest CAGR from 2022 to 2030. Europe's regional market is expanding due to the continent's rapid adoption of robotics in the home and industrial sectors. The rapid growth and development of cutting-edge robotics technology drive the regional market. Moreover, the Germany robotics market held the largest market share, and the UK robotics market was the fastest-growing market in the European region.

Major market players are spending a lot of money on R&D to increase their product lines, which will help the robotics market grow even more. Market participants are also taking various strategic initiatives to grow their footprint, with key market developments such as new product launches, contractual agreements, mergers and acquisitions, increased investments, and collaboration with other organizations. Competitors in the robotics industry must offer cost-effective items to expand and survive in an increasingly competitive and rising market environment.

One of the primary business strategies manufacturers adopt in the robotics industry to benefit clients and expand the market sector is manufacturing locally to reduce operating costs. In recent years, the robotics industry has provided some of the most significant benefits. The robotics market major player such as Universal Robots A/S (Denmark), Kawasaki Heavy Industries Ltd. (China), BOSTON DYNAMICS (US), and others are working on expanding the market demand by investing in research and development activities.

As a Massachusetts Institute of Technology spin-off, Boston Dynamics is an American engineering and robotics design firm established in 1992. BigDog, Spot, Atlas, and Handle are just a few of the dynamic, highly mobile robots that Boston Dynamics has created. In October 2022, the company pledged to oppose weaponizing any robotics inventions. Five additional robot businesses signed the pledge when Boston Dynamics invited them to do so.

Also, an American technology company, iRobot Corporation, creates and manufactures consumer robots. Three researchers from MIT's Artificial Intelligence Lab, who created robots for military defense and space exploration, started the company in 1990. The company sells a variety of self-driving floor sweepers (Braava), vacuum cleaners for the house (Roomba), and other cleaning tools. In November 2021, a Swiss maker of air purifiers, Aeris Cleantec AG, was acquired by iRobot. In 2022, iRobot started marketing air purifiers with the Aeris design under its name.

Key Companies in the robotics market include

• Denso Corporation (Japan), among others

July 2022: First Tech Systems & Automation introduced the RPL SERIES robot palletizers, efficient robotics cells for a range of palletizing purposes that are a Make-in-India robotics palletizer solution. The gripper for the palletizer was made in-house to meet the palletization needs of contemporary packaging systems.

How much is the robotics market?

What is the growth rate of the robotics market?

Which region held the largest market share in the robotics market?

Who are the key players in the robotics market?

Which type led the robotics market?

The articulated category dominated the market in 2021.

Which mobility had the largest market share in the robotics market?

Mobile robots had the largest share in the market.

Development of Artificial Intelligence (AI) Technology Likely to Drive the Growth of the Global R...