Mobile Point of Sale (POS) Market was valued at USD 21.3 Billion in 2019 and is expected to register a CAGR of 23.4% during the forecast period.

Mobile Point of Sale (POS) Market was valued at USD 21.3 Billion in 2019 and is expected to register a CAGR of 23.4% during the forecast period.

Mobile POS is an integrated mobile device such as a smartphone or a tablet that functions as an electronic point of sale terminal. Mobile POS consist of hardware and software. The mobile POS hardware is equipped with Wi-Fi, Voice over Internet Protocol (VoIP), Radio Frequency Identification (RFID), and smart card, among other advanced features. These hardware devices allow mobile POS terminals to accept the payments remotely using wireless applications. The mobile POS terminals are also used to manage assets and inventories, send digitized notes, send and receive invoices, and capture signatures at the counters. The major driving factor for the growth of the mobile POS market is the increasing penetration of mobile technologies and advancements in the wireless network infrastructure. The rising government support and regulations conducive to the use of digital technologies are further driving the growth of the mobile POS market. Further, the rising adoption of contactless payment solutions is expected to create a significant growth opportunity for the market during the forecast period. However, the growing data-security concerns are expected to restrain market growth during the forecast period.

Mobile POS Market has been segmented based on Component, Deployment, Connectivity, Application, and Region/Country.

By Component, the global mobile POS Industry has been divided into hardware, software, and services. The services segment has been further divided into professional and managed services.

By Deployment, the global mobile POS industry has been divided into cloud and on-premise.

Based on connectivity, the global mobile POS market has been divided into 3G/4G, Wi-Fi, Bluetooth, and others.

On the basis of application, the global mobile POS market has been divided into retail, restaurants, healthcare, entertainment, hospitality, and others

Geographically, the global mobile POS market has been analyzed for five regions—North America, Europe, the Asia-Pacific, the Middle East & Africa, and South America.

Global Mobile POS Market is estimated to register a CAGR of 23.4% over the forecast period. The geographic analysis of the global mobile POS market has been conducted for North America, Europe, the Asia-Pacific, the Middle East & Africa, and South America. 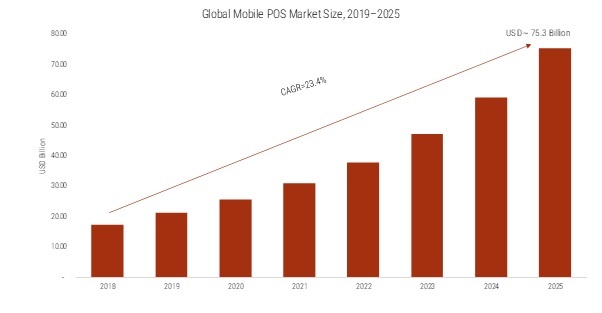 The Global Mobile POS Market is registering a high growth due to the rising number of online payments, the proliferation of RFIDs, and the growth of retail infrastructure in various developing countries. Major players are partnering with enterprises as a part of their inorganic strategy and investing in new product development as a part of their key organic growth strategy to enhance their position in the market and cater to the industry demand. For instance, in January 2019, HP has partnered with PayPal to release its all in one POS unit. This unit is targeted mainly at hospitality companies and small and medium-sized businesses, with PayPal handling the payments and other financial services.

What is the CAGR of the mobile POS market?

What is the mobile POS market value?

What are mobile POS components?

Hardware and software are some mobile POS components.

Who are key players of mobile POS market?

What is driver of the mobile POS market?

Increase in partnership among companies can drive the market.

The Retail Application Segment is Expected to Register the Fastest Growth Rate in the Global Mobi...