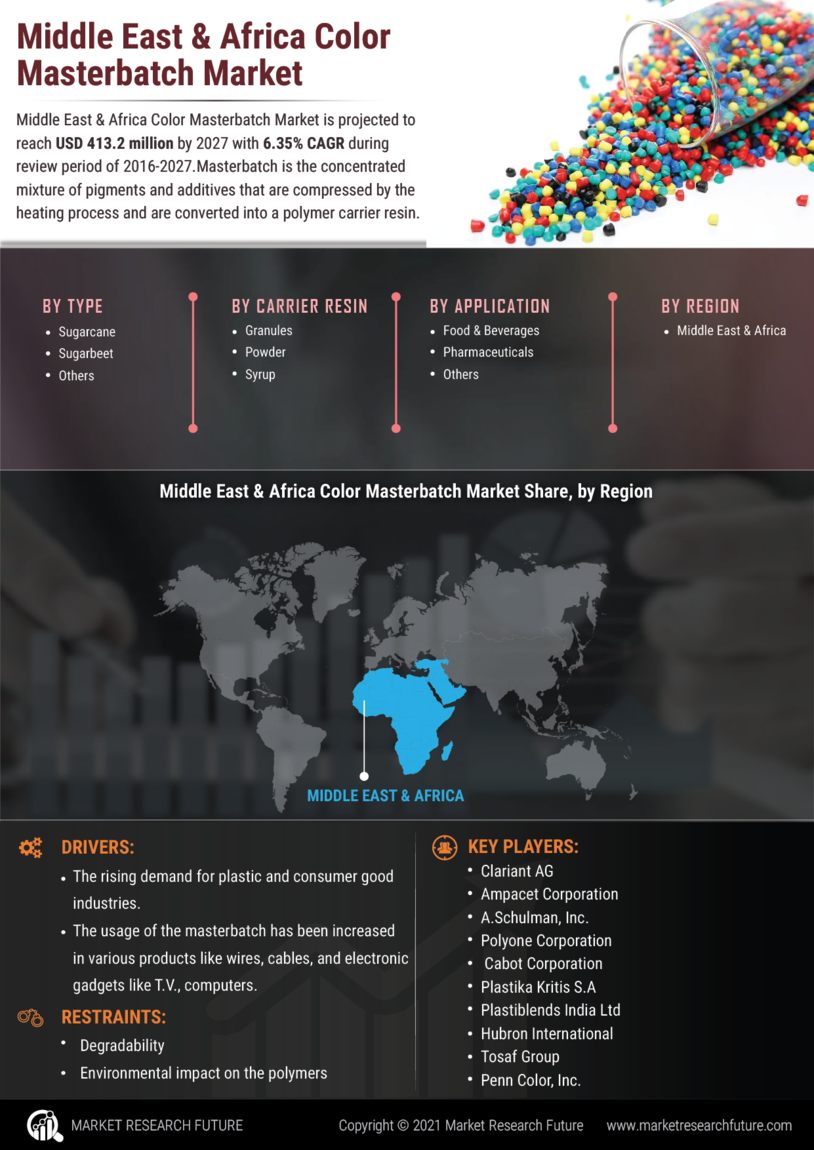 Middle East & Africa Color Masterbatch Market is projected to reach USD 413.2 million by 2027 with 6.35% CAGR during review period of 2016-2027Masterbatch is the concentrated mixture of pigments and additives that are compressed by the heating process and are converted into a polymer carrier resin. After this process, the mixture is cooled and is cut down into a granular form. The color masterbatch is a raw polymer that is used in the process of converting a solid additive to manufacture the plastic. The Color Masterbatch Market has seen potential growth in the past few years, and the increasing number of procedures at small and medium scales, along with the key manufacturers, are focusing on turning the global markets. The rising demand for plastic and consumer good industries have propelled the demand for Color Masterbatch in the market. The applications for the growing usage of Color Masterbatch are in various sectors such as automotive, textile, agriculture, consumer goods, packaging, construction, and others.

The fear of people and the continuous rise in the cases of the COVID-19 has badly impacted the Masterbatch Market in most of the regions. The manufactures in the plastic industries are shattered as the world is facing the biggest downfall of the decade. Lack of buyers resulted in the decreased production, and the prices are greatly hampering the growth of the Color Masterbatch Market. During the pandemic, the G20 group of nations has cut short the production of crude oil so to stabilize the Covid-19 impact. The studies have shown that the stringent rules and regulations regarding plastic usage have impacted production and hindered the growth of the Color Masterbatch Market at a vast level.

The Color Masterbatch is advantageous with several factors, and the most important is its versatility. The major driving reason to grow in the market is that the increasing need for plastic and the packaging in all the modern applications it is a required element. The developments have shown that newer and improved technologies are introduced for quality performance with better properties of the Color Masterbatch. This has made the process faster, easier and the low costs are raising the demands of the product. Such new areas of progress have developed color masterbatches to the next type that contributed to having fast white, black, and other basics of the Color Masterbatches.

The major driving factor in the growth of the market is the accelerated demands of plastic by the various end-user industries. The usage of the masterbatch has been increased in various products like wires, cables, and electronic gadgets like T.V., computers, and also home appliances that aided a rapid market growth.

As per the analysis, the end-user industries are growing so fast, so if the small-scale vendors will provide better quality raw materials, the overall market will grow and will generate great revenues. The new investors and manufacturers can set up the projects in the areas where the weather and environmental conditions are favorable. This will provide better opportunities to the supplier and the buyer.

The biggest restraining factor that impacted the growth of the Color Masterbatch Market is the degradability and the environmental impact on the polymers. Due to certain polymers like polyvinyl chloride, The other restraints for the growth of the color masterbatch market are stiffness and color to the plastic is not of the utmost quality. These issues have been overcome by the developed technologies to maintain growth in the market.

The environmental concerns and the volatile raw material prices are a challenge for the masterbatch market growth. The geopolitical issues and the strains in the government regulations have changed the market growth scenarios after the pandemic.

The lightweight and effective costs have increased the plastic demand in the market, and it turned out to boost the Color Masterbatch Market. The increasing safety, security, and environmental concerns have fuelled the Color Masterbatch Market as the usage of colorful plastics for packaging, and it is eventually an argument for the growth in the global market. The middle east, Africa and Egypt have shown significant growth in the past years and will continue to grow with high revenues in the global market.

In 2019, the middle east region had led the market with growth and giving a share of more than 35% to the Color Masterbatch Market. UAE followed the trends and is still standing strong. The increased population, along with a couple of activities that have grown the market products are escalating the construction and industrial growth as well. Saudi Arabia is one of the leading producers of crude oil, so the availability of raw material has benefited this area for enhancing production and the quality of the product. According to Gulf Cooperation Council (GCC) and Gulf Petrochemicals and Chemicals Association, the evaluation has shown that Saudi Arabia has accounted for 67% of the production of plastic resins and is the largest polymer consumer that is around 61% consumption of the 5 million tons of the consumption is the GCC. Other regions like UAE and Africa have also contributed around 20-25% to the market production. In several regions like North Africa and some areas of APAC regions have seen the growth of pharma-based industries that resulted in huge plastic packaging demands, and subsequently, the Color Masterbatch is boosting the market in these locations as well.

As per the analysis, in 2019 Government has invested around $46 billion in the health care and development sector, so that has given a privilege to the developing countries to invest, and start-ups have been introduced that are also propelling in the Color Masterbatch Market. The APAC region has also dominated the market with the largest consumption of the polymers that have been taken from India and China.

New technology launches, R&D activities, Collaborations, and acquisitions are the key strategies adopted by the players in the Color Masterbatch Market. There were some restricted members in terms of market players in the past few years; however, now, when the consumption and the demands have increased, there are so many industries that have been emerged and now running the market with maximum revenues and profits.

● In 2020, Tosaf Group, an Israeli-based company, opened its first plant in North America, and this was a sign of expanding the industry outside the borders of middle east regions.

● In January 2020, an international industry Cabot Corporation had a deal for around $11.5 million with Shenzhen Sanshun Nano New Materials, a Chinese nanotube supplier that is a leading industry for carbon nanotube production in China.

● In March 2019, Ampacet Corporation introduced a new plant in Belgium that aims for better and improved overall customer experience by this expansion.

● In April 2018, one of the major market players, Tosaf Group, launched an anti-fog masterbatch that is used in packaging. It reduced the effect of moisture on the films and is used at a really wide range in the production processes.

● In January 2018, Clariant AG launched the new masterbatch production house in Yanbu, Saudi Arabia. This led the Clariant AG to strengthen the position in Africa, and middle east areas that made the access for the raw materials and the logistical connections were improved.

The above report has provided an extensive outlook of the future for the Middle East & Africa Color Masterbatch Market. Primarily the product usage, opportunities, and the type have been discussed. Along with this, a detailed description has been provided in terms of quality and the growth areas of the market. If we go through the quantitative analysis, various industry experts have given their key opinions, and deeper insight has been provided to gain maximum profits in the market. The current market scenarios and the historical overview have been mentioned in the report analysis of the Middle East & Africa Color Masterbatch Marke research in the forecast period. Market segmentation has been studied broadly. The key players in the recent past have been deeply discussed. Overall achievements, revenue growth, and profits have been broadly mentioned as per the forecast period.

What is the projected growth rate of the Middle East & Africa color masterbatch market?

What is the expected size of the Middle East & Africa color masterbatch market by 2027?

Middle East & Africa color masterbatch market is expected to reach a size of USD 413.2 million by 2027.

Which region is anticipated to dominate the Middle East & Africa color masterbatch market?

Africa is anticipated to dominate the Middle East & Africa color masterbatch market till 2027.

Middle East &amp; Africa Color Masterbatch Market is expected to growth at a CAGR of ~6.35% durin...