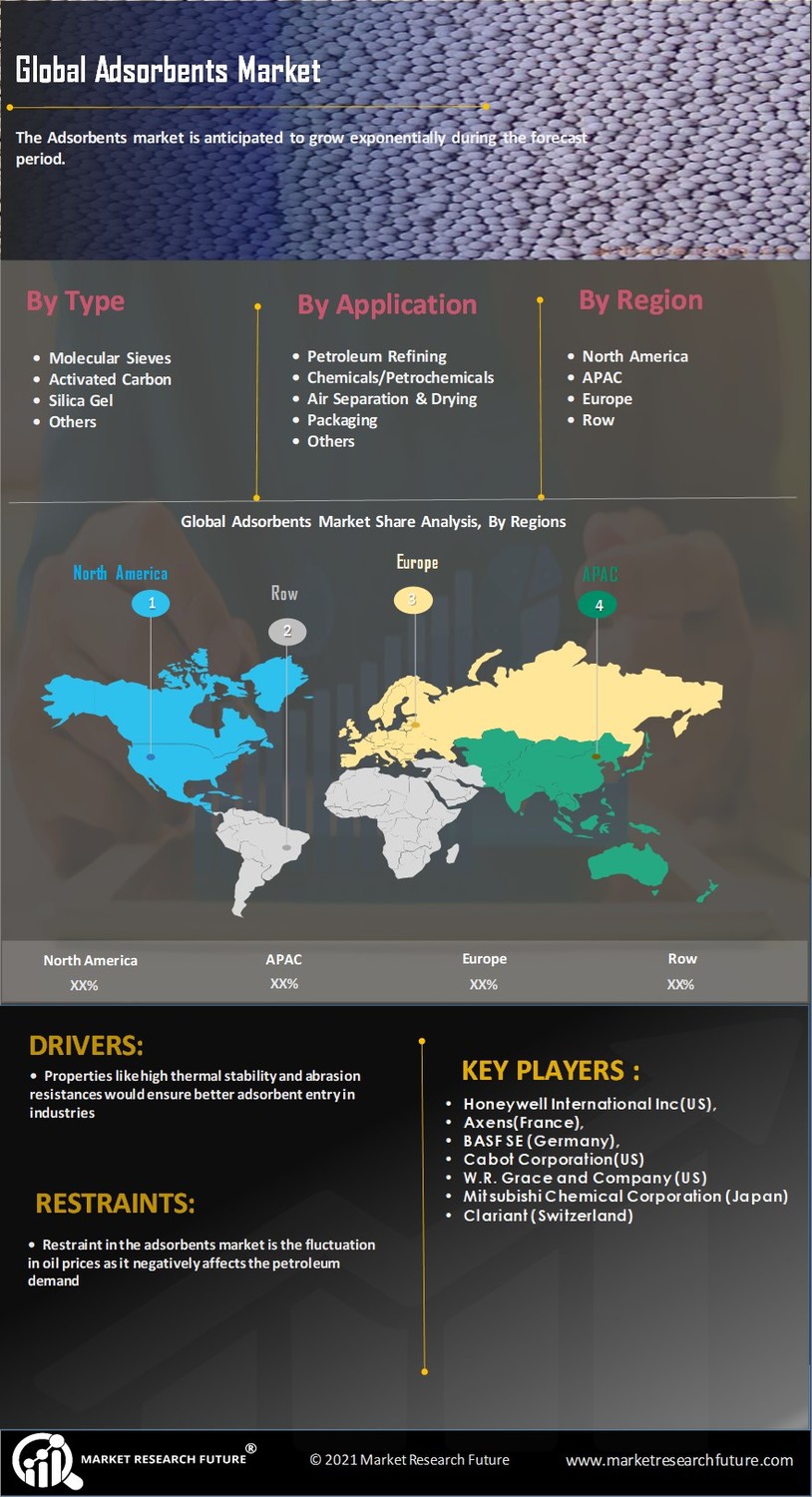 Adsorbents are materials that can extract certain elements from solids, liquids, and gases without changing their physical properties. They create layers through the process of adhesion and are mainly used in the form of rods, monoliths, and molding, etc. Adsorbents have various properties such as high abrasion resistance, high surface capacity, high thermal stability, and many others, which makes them suitable for use in various petrochemical industries, air separation and drying industries, water treatment industries, and many others. Thus, adsorbents are the upcoming market leaders since they have multiple properties that can be very useful for other industries as well.

Adsorbents are mostly in demand for their capacity to treat water since water treatment has been one of the various issues that the industries usually face. Recent technology in the market for adsorbents was developed for developing low-cost polymer-based adsorbents that can be used to remove toxic materials, anions, and other hazardous substances from industrial wastewater and convert them into freshwater. Though this technology is not in full use, it provides for the development of such techniques for the future, which can be easily used for the treatment of wastewater.

The global market for the adsorbents is expected to rise at a compounded growth rate of around 6.3%, and the adsorbents market value is expected to be around $8.2 billion in 2030 due to various large-scale developments in oil and gas processing, petrochemicals, and also the molecular sieves market.

The impact of covid 19 can be easily seen in a way that most of the big players have to shut down their main production units and are also forced to lay off employees. However, it is expected that the market will certainly pick up growth as soon as the lockdown restrictions are removed and people can move freely. Thereafter, the adsorbents industry would be expecting a dynamic increase in demand for the primary industry manufactured consumer products which would finally increase the demand for the adsorbents.

The rising demand for the air-conditioners and refrigerators have also boosted the adsorbents market revenue since the adsorbents are the key concentrators that are used in such industries and have thus gained significance in this market too.

Though the covid 19 globally decreased the adsorbent market share, however the rising demand for oxygen concentrators in countries like India gained momentum, and gradually the demand for adsorbents increased since the adsorbents provide the advantage of segregation of oxygen from the air and concentrating it for medical purposes only.

Also, the adsorbent materials can attract molecules on their surfaces. However, this ability is limited, and once the capacity is over, it would lead to an equilibrium leading to desorption.

The adsorbents market has been experiencing continuous growth in terms of its usage and application in a variety of industries. However, the adsorbing materials are themselves a form of recent technology that has been developed to fulfill basic industrial needs. The adsorbents market works on the denitrogenation technology in the refining of petrochemicals and removing sulfur and nitrogen compounds present in liquid fuels.

The current method of hydro-sulphurization leads to various environmental hazards, which create a demand for adsorbents that selectively remove hydrogen and sulphuric compounds at room temperatures without much-activated use of hydrogen.


Segment OverviewThe adsorbents market has been segmented as follows:

Adsorbents Market, By TypeThe adsorbents market by type includes the various purposes for which the adsorbents technology has been used.


Adsorbents Market, By ApplicationThe adsorbents market by application includes the various industries which are currently using the adsorbents technology


Adsorbents Market, By RegionThis segment signifies the regions where the adsorbent market has been rising significantly.


Regional AnalysisThe North American region holds a major share of the market and is expected to grow at a higher pace in future years, whereas the Asia Pacific is an upcoming region showing strong results. The major key factor which is driving growth in the North American region is the oil and petrochemical industries, especially in the USA and Canada. Moreover, this region has experienced a recent boom in shale gas which has led to increased use of adsorbents in the petrochemical industries. In addition to this, the pharmaceutical and food and beverage industries have also been experiencing huge demand, which has ultimately increased the demand for adsorbents for drying solvents and synthesis products.

The Asia Pacific is another region that is expected to grow at a faster pace and provide positive results. The growth in the population in this region has given rise to pharmaceuticals, food and beverage industry, petrochemicals, and various other industries, which has ultimately increased the adsorbents market size. Also, developing nations such as India and China have been continuously increasing the demand for crude oil requirement which in turn has boosted the demand for adsorbent materials and has boosted growth.

Competitive LandscapeThe competitive landscape in terms of the adsorbents market has been immense and nail-biting, with new players easily entering the market and the existing players making huge investments in this segment. The big names from this market are:

W.R. Grace and Company (US)

The key players in the market are more focused on developing future strategies and set themselves as joint ventures to increase the adsorbent market share and size.

The Global report helps the investors to gain meaningful information about the market and make decisions wisely. The report discusses the steps taken by the market leaders to boost the market growth and inflate market valuation for their good. The report fully summarises the ongoing market scenario in the electric vehicle market, which would help the intended audience to seek more information about the market. The objective of the report was to fully summarise the key players in the market and their role in boosting the electric vehicle market value. The report also discusses the future growth prospects and the competitive landscape in the adsorbents industry and lays down the expected growth rate of the market along with the hindrances it might have to face.

Which region is leading the global adsorbents market?

Who are the resourceful players impacting the adsorbents market?

Which product segment is going to lead the adsorbents market?

The molecular sieve segment would lead to the global adsorbents market.

Which sector leads the application segment of the adsorbents market?

The petroleum refining segment has the scope to dominate the adsorbents market.

What factors to drive the adsorbents market ahead?

Properties like high thermal stability and abrasion resistances would ensure better adsorbent entry in industries like petrochemicals, air separation and drying, and water treatment which can inspire the adsorbent market growth.

Growing consumption of adsorbents in end-use industries is estimated to drive the market during t...