metallized films market is expected to reach US$ 5.7 Bn expanding at a CAGR of 5% from 2022-2028. Metalized films are a type of polymer film that combines metal and plastic benefits. On one or both sides of the metalized sheets, a very thin metal coating is applied. Metalized films are used in a wide range of industrial applications due to their advantageous properties, which include reduced permeability to light, water, and oxygen. Increased demand for metalized films, particularly in developing economies like India and China; increased use of metalized films in a wide range of end-user applications like electrical and electronics, consumer goods, packaging, and others; increased demand for environmentally friendly packaging materials and solutions; increased government investment in research and development activities; and a surge in industrialization, especially in developing economies like India and China.

The cosmetics and personal care industry's increased need for a metalized film is propelling the market forward. The need for metalized films in the production of decorative materials and other industrial applications, as well as the growth and expansion of various end-user verticals in emerging economies, would have a direct and positive impact on the market's growth rate. The growing focus on reaching sustainability goals, as well as the increased focus on technological advancements and modernization of industrial techniques, will help the industry expand even more. 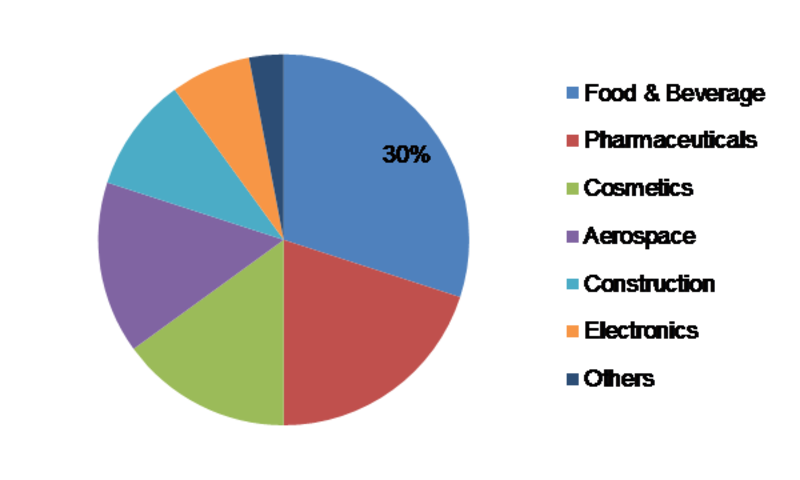 The market in Asia-Pacific dominated the global metallized films market in 2017 due to the high demand in end-use industries. India, China, and ASEAN countries are some of the prominent contributors to market growth.

North America accounted for the second-largest market share in 2017 on account of the high demand for metallized films in the food & beverage, pharmaceuticals, and aerospace industries in the region.

The European market is expected to grow at a significant rate due to the high demand in the regional pharmaceuticals industry.

The Latin American market is projected to witness considerable growth due to the growing food & beverage and cosmetics industries, especially in Brazil and Argentina.

The market in the Middle East & Africa is also likely to grow due to the demand in the food & beverage industry.

The global metallized films market has been segmented on the basis of metal, material used, application, end-use industry, and region.

On the basis of metal, the market has been categorized as aluminum, copper, nickel, chromium, and others.

By material used, the market has been segregated into PE, PET, PP, nylon, polyimide, polycarbonate, thermoplastic polyurethane, and others.

Based on application, the global metallized films market has been segmented into flexible packaging, lamination, hot stamping foil, holograms, labelling, electromagnetic blend, thermal insulation, and others.

By end-use industry, the market has been divided into food & beverage, pharmaceuticals, cosmetics, aerospace, construction, electronics, and others.


In February 2022, UFlex, a global leader in polymer sciences and one of India's largest multinationals in flexible packaging materials and solutions, developed innovative and revolutionary low- and multi-unit packs (LUP) for products like biscuits, bread, and snacks that are commonly devoured rapidly. These packs require a metalized film packing structure that maintains a firm seal while providing excellent oxygen and moisture barrier performance.

What could be the major driving force for the metalized film market?

The increasing use in the packaging industry can be the driving force.

What could be the restraining factors for the metalized film market?

Lack of metal availability and high prices can hold back the market growth.

Which region to steer the metalized films market ahead?

The Asia Pacific metalized film market would steer the market ahead.

What are the applications mentioned in the metalized film market study?

Metallized Films market : Demand for packaged food across the globe is set to drive the growth