Generator Sales Market Research Report by Type (Continuous, Stand By and Peak Shave), by Fuel (Diesel and Gas), by End-use (Residential, Commercial and Industrial), by Portability (Stationary and Portable), and Region - Global Forecast till 2030 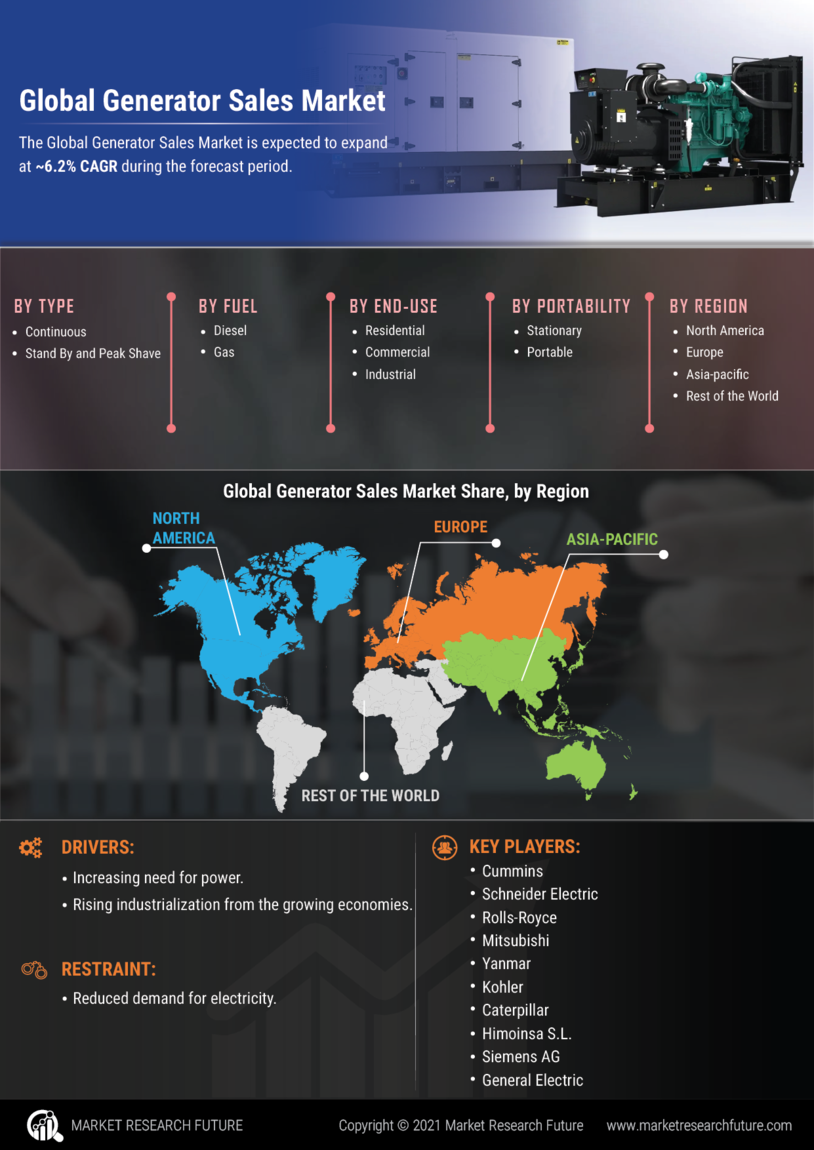 The global generator sales market is expanding due to facts such as industrialization and urbanization, increasing demand for power backup systems, long power cuts during peak hours, and the need for continuous power supply. For an instance oil & gas industry needs power for efficient functioning across the value chain. Thus they require power generators so that in case of any load shedding or power cut, generators with high power generating capacity could meet the demand for power. Siemens has a large variety of generators that are capable of generating power up to 5 MW. Along with this, the commercial buildings are also requiring generators at large scale to provide the power supply every moment. Generator sales are directly related to the increased demand for power, either on small scale or large scale.

Power is an essential requirement for industrial growth and normal functioning of factories and manufacturing units, residential, and commercial sector. The demand for energy and power has increased rapidly in recent times. Although, there are several existing power grid projects and power grid projects underway, across the globe, they are bound to malfunction at a point. Thus, generators play an important role when energy supply is concerned. Generators act as a backup in the event of power failure to any industry, grid or construction site. Rising demand for continuous flow of power is set to boost the demand in the generator sales market.

Generators are machines that use diesel or gas or any other substance as fuel and converts mechanical energy to electrical energy with the help of the engines. The generators are capable of generating power of more than 500 KW. This helps industries generate power in case of any load shed from the state distribution companies. Since industries that are completely dependent on power for the functioning of machinery, can face huge losses in case of any load cut. Thus, industries keep backup in the form of generators for smooth functioning of the operations.

Who are the significant end-users in the generator sales market?

The significant end-users in the generator sales market include commercial, industrial as well as residential.

Based on portability, which segment can take the lead in the global market?

Based on portability, portable generators can gain higher traction in the global market compared to the stationary ones.

What CAGR can be obtained by the market in the ensuing years?

The CAGR that can be obtained by the market in the ensuing years is estimated to be 6.67%.

Which companies are identified as the leaders in the global market?

How is the market set to perform during the conjectured timeframe?

High demand for power, small scale as well as large scale, can help the market size expand significantly in the coming years.