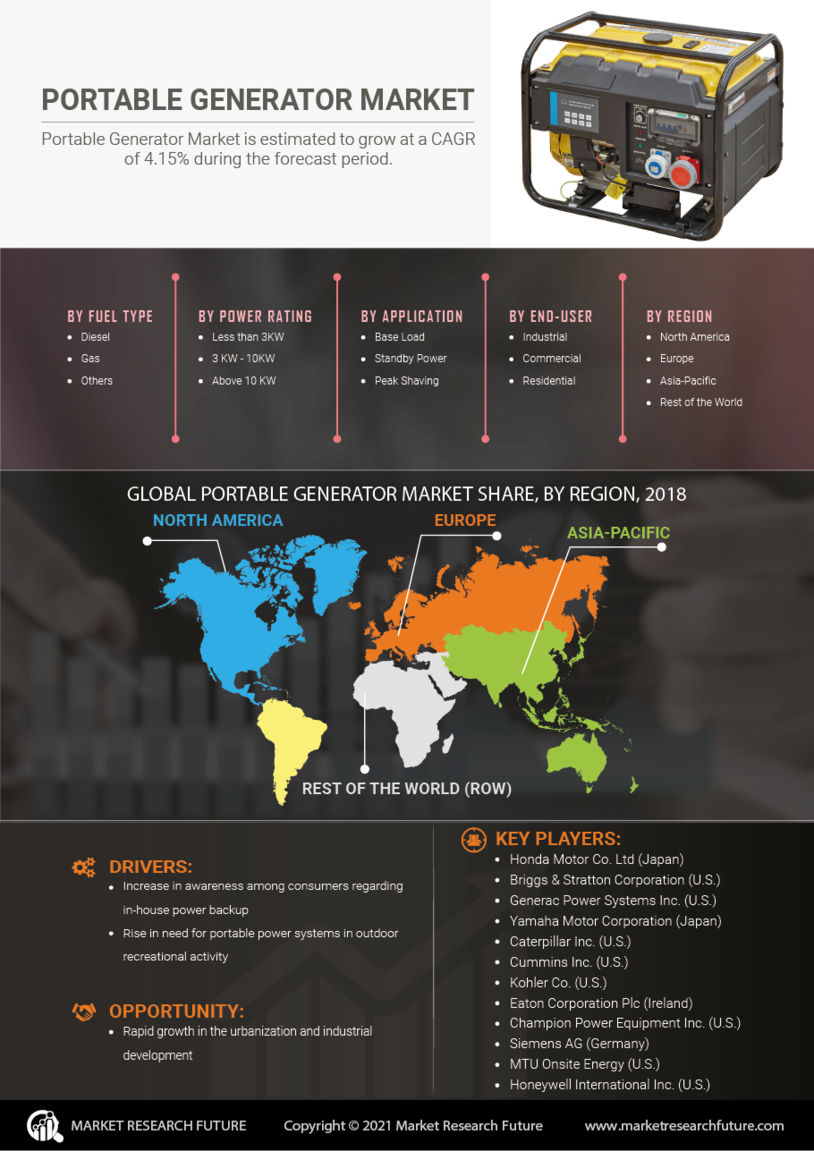 Portable Generator Market is estimated to grow at a CAGR of 6.08%, USD 2.65 Billion during the forecast period.

The global portable generator market has been segmented based on fuel type, power rating, application, end-user, and region. Based on application, the market is segmented into base load, standby power, and peak shaving. Among these, the standby power is an important application segment of the market. Standby power signifies an electrical power generation facility that is operated only during disruptions of electrical service from the distribution system. The peak shaving segment is expected to contribute significantly in the global portable generator market during the forecast period, due to energy-intensive industries. The peak shaving power generator is largely preferred among industries that want to steer clear of power suspension during peak and non-peak hours.  Based on fuel type, the market has been segmented into diesel, gas, and others. The gasoline segment accounted for the largest market share in 2016. It is expected to grow at the highest CAGR during the forecast period, mainly due to stringent environmental norms to control the emission of hazardous gasses from diesel generators.  In fuel type, others includes propane, LPG, and biodiesel. The growing focus on environment friendly technologies around the world is driving the market for propane, LPG, and biodiesel.

Based on end-user segment, the market has been segmented into industrial, commercial, and residential. The residential segment accounted for the largest segment mainly due to increasing demand for in-house power backup. Based on the power rating, the market is segmented into less than 3KW, 3 KW-10KW, and above 10 KW. The less than 3kW portable generators segment is likely to grow at a healthy CAGR during the forecast period. Increase in awareness among consumers regarding in-house power backup and rise in need for portable power systems in outdoor recreational activity driving the demand for the segment. Generators with power rating more than 10kW power are widely used in industrial sector, owing to the need for greater power supply to run machines and industrial tools, which, in turn, is projected to drive the portable generators market.

On the basis of region, the market has been segmented into North America, Europe, Asia Pacific, and Rest of the World. North America region dominates the global portable generator market. Aging grid substructure and natural calamities causes frequent power outages and continuously growing demand from industrial sector is fuelling the growth of the market in the region. The U.S. is the largest contributor in North America as well as the global portable generator market. Asia Pacific region is expected to grow at the highest CAGR during the forecast period, majorly due to factors such as the continuous growth of constructional and developmental activities. China, India, Japan, and Thailand are the key contributors to the Asia Pacific market. China accounts for the largest market share in the region due to rapid growth in the urbanization and industrial development.

Latin America and GCC countries are expected to contribute significantly to the global portable generator market during the forecast period. High growth in construction activities in GCC as well as Latin America is driving the growth of the market. Moreover, easy availability of fossil fuels in GCC region positively influences the growth of the market.

Portable generators are internal combustion engines used to generate electricity. They are very useful when temporary power is needed. They offer a reliable backup source of power during electrical power outages and also provide assistance during severe weather conditions, such as ice or wind storms. According to MRFR analysis, the market for portable generators is increasing at a rapid pace and is projected to increase significantly throughout the forecast period, mainly due to increasing demand for electricity across the globe. The portable generator market is expected to have a great number of expansions over the forecast period due to constant technological advancement in energy sector, coupled with increased power demand. The portable generator market is also expected to have high development activities by conglomerates and well-established companies.

What is the projected market value of the global portable generator market?

The global portable generator market is expected to record a considerable market valuation due to the increasing need for continuous power supply during power failures.

What is the estimated growth rate of the global portable generator market?

The global portable generator market is projected to register a moderate 4.15% CAGR in the forecast period.

What is the power capacity segment of the global portable generator market expected to witness the highest growth?

The above 10 kW segment is slated to expand as the fastest-growing segment.

What is the end-user segment of the global portable generator market expected to witness the highest growth?

Who are the key players operative in the global portable generator market?

Portable Generator Market Projected To Grow At A Cagr Of 4.15% By 2027