Solar Rooftop Market Information Report by Capacity (>10 kW, 11 kW- 100kW and <100 kW), By Connectivity, (On-Grid and Off-Grid) By End User (Residential, Commercial and Industrial) and By Regions - Global Forecast to 2028

The global solar rooftop market is a very dynamic market and expected to witness high growth over the forecast period. A solar rooftop photo voltaic (PV) system converts sun’s light energy into electricity energy through solar rooftop mounted on rooftop of a building. Solar rooftop systems can either connect to the grid, or they can be off-grid with battery storage. They are used in residential, commercial and Industrial purposes, with system ratings of upto 10 kW, 11 kW–100 MW and more than 100 MW, respectively.

The global growing demand for solar systems, primarily in residential rooftop application is driving the solar rooftop market. As, it is witnessed since last decade, a gradual downfall in the prices of key components such as, silver and poly-silicone, which are used in the manufacturing process of solar cells. Solar rooftop systems comes along with a great advantage through reduction in harmful emissions noise less operations and lowering the overall energy bills. A gradual downfall in the prices of industrial commodities used to manufacture solar panels, and the rising inflation in electricity & natural gas sector, will certainly act as a driving force for global solar rooftop market.

Currently, 11 kW- 100kW rooftop solar system segment by capacity, holds the largest market share and is expected to grow at the highest growth during the forecast period. A rooftop solar system ranging with a power capacity from 11 kW- 100 kW are the best investment for commercial and small-scale industry. A modern-day 100 kW rooftop solar system will be comprised of between 380-410 panels and will require about 600-656 m2 of roof space, depending upon the wattage of the panels. Reported pricing, for PV system installations, completed by project-level data from U.S. Department of Energy SunShot Initiative in January 2017, were about USD 3.78/W (Median) for commercial installation of over 10 kW to 100 kW.

Asia-Pacific region holds the largest share of approximately 50% in global solar rooftop market in 2016 and is expected to grow at a high rate resulting into growth in sale of solar rooftop subsequently. The continuous growth in industrial & commercial and utility sector in Asia –Pacific, requires a high amount of electricity for their operations. Also, the government initiative for utilization of renewable energy is making the end user opt for solar energy. All these factors will majorly constitute for the growth of solar rooftop in this Asia-Pacific for forecast period. 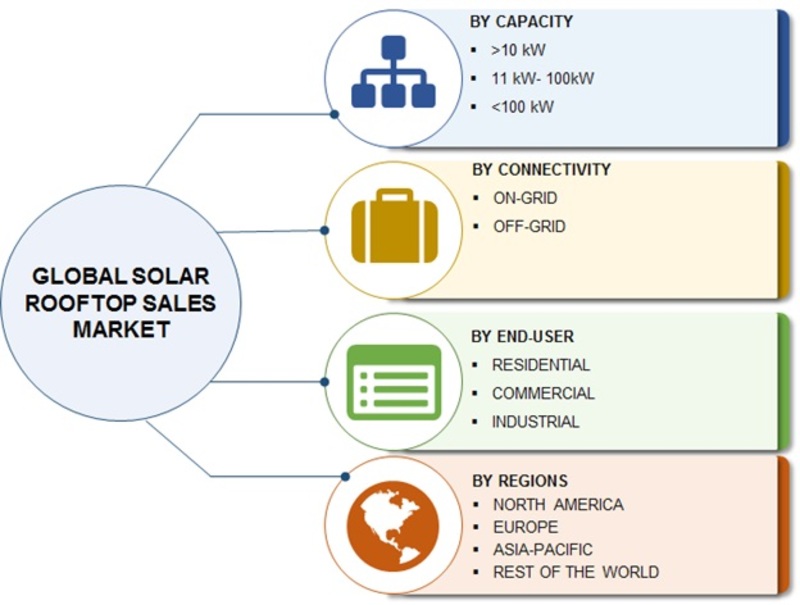 What is the market value of the global Solar rooftop sales market?

The global Solar rooftop sales is expected to record a substantial market valuation by 2028.

What is the estimated growth rate of the global Solar rooftop sales?

The global Solar rooftop sales is projected to register a 20.57% CAGR in the forecast period.

What is the type segment of the global Solar rooftop sales market expected to witness the highest growth?

The off-grid segment is slated to expand as the fastest-growing segment.

What is the vertical segment of the global Solar rooftop sales market is expected to witness the highest growth?

Who are the key players operative in the global Solar rooftop sales market?