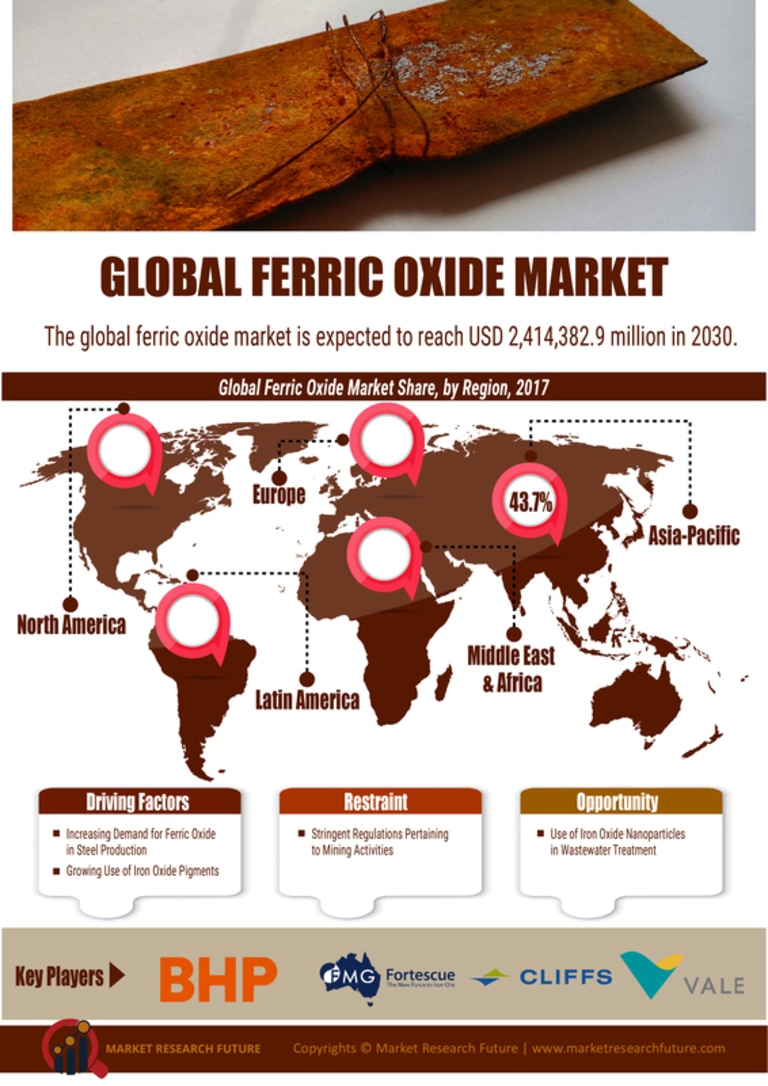 Many factors contribute to the ferric oxide market revenue growth that includes the growing demands for adopting steel in all major areas of applications. The primary areas of application are in end-user industries like construction, transportation, packaging, energy, etc. Steel is also a useful product in manufacturing products like panels, doors, fuel tanks, braking systems, suspensions, gears, and blocks. These also have been proved quite useful in giving colors to materials like inks, paints, rubbers, plastics, cosmetics, tiles, and concrete bricks.

Rust is one such simple term that almost everyone is aware of. Rust is also called hydrated ferric oxide which is formed when ferrous or iron comes in contact with an alkali.

The use of iron oxide has also been on the increase in the treatment of wastewater. However, there are very stringent rules and regulations laid down by the administrative bodies on the mining activities, which acts as a restraint in the market's growth.

COVID-19 pandemic has struck hard on the lives of everyone across the globe. Apart from physical and mental pressure, the finances have gone down tremendously. The business has suffered major losses, which would mean that they need expert guidance and mentorship to come back on track. The reports that have been prepared focus on the steps and ways that can be implemented to restore the business's normal functioning, which has otherwise been affected by the pandemic. The reports also focus on the plans being implemented by the key players in the market to make the business owners and the staff self-analyze about their ferric oxide market analysis and effective ways that can be followed to restart effectively. The qualitative and quantitative measure of the market size has also been discussed in the report and the historical background and the current market scenario. It would certainly take time to get back to normal, but at least a correct step ahead would make a difference.

The process of manufacturing the steel begins with the procedure called processing of the ores of iron. The major ores of Iron are Hematite, magnetite, limonite, and other rocks. An association has been set up to monitor and administer the activities related to steelmaking. According to the association, 1billion tons of metallurgical coal, 2 billion tons of iron, and 575 million tons of recycled steel are utilized by iron oxide manufacturers, 1.7 billion tons of crude steel per annum. Steelmaking based on iron ore processing accounts for almost 70% share of the total steel production. With the advancements in technology, the advanced high-strength steel, also referred to as AHSS, is being widely used in the market because it helps reduce automobiles and enhances the vehicle's efficiency concerning the fuel. The studies have also proved that automobile manufacturers have been able to reduce the weight of the vehicles by 25-39% with the use of AHSS. The granular ferric oxide, Ferric iron oxide powder, and hydrated ferric oxide have been used for ages in different end-user industries for various useful purposes.

Regulatory implications play a vital role in ferric oxide market analysis and expansion. It is rather one of the major factors that pull back the change. Various governments across the world and regulatory bodies have laid down laws and regulations against the mining procedures of the iron ores. This is because it has been known to cause various harmful effects to the environment. One of the major causes of concern is deforestation, leading to the cutting down of trees to get the iron ores extracted. Though the laws need to be regulated for the good of the environment and the living being, they tend to affect the ferric oxide market revenue growth for sure.

Segmentation of the ferric oxide market based on the application is as follows:

Among all these, the segment estimated to register a pretty reasonable CAGR is the steel production segmentation. It is estimated to have a CAGR of 5%. This is because of its use in various end-user industries like panels, doors, steering, braking systems, and many more. This segment accounts for almost 45% share of the entire market. Out of these, 50% of the consumption is done in the construction industry.

The pigment segment follows the steel production segmentation with an estimated CAGR of 4.7% during the forecast period.

Based on the regions, the market is divided into the following:

The European market is also expected to exhibit a significant CAGR because of the increase in the demand for steel in major industries like automobiles. The major contributors in these are Germany, Russia, the UK, and France.

All these key players in the market have been focussing on building up a market that grows slowly but steadily. No wonder there are various driving factors impacting the growth of the market. Still, all these players have ensured that the strategized implementation of the plans is done towards the benefits of their organizations and the market as a whole. Various mergers, collaborations, and acquisitions have resulted in the tremendous growth of the market within the last few years. Not to forget the idol they have been presenting before the newcomers in the market, which helps them learn about the market soon.

Here is the list of the few recent developments in the market:

The exclusive report prepared for the ferric oxide market contains all the components that a message should have to ensure the smooth working of an organization. Starting from the overview of the ferric oxide market, which gives the details about the product, followed by the COVID-19 analysis of the market, the business owners self-analyze themselves and take appropriate actions to combat losses have incurred due to the pandemic. The market dynamics, the segmentation overview, and the market's regional analysis are also included in the report. The list of all the key players of the market is also discussed, along with discussing the steps and plan implemented by them regularly to reach the place where they stand today. The recent developments of the market are also included in the report to keep the companies up to date with the advancements in the industries.

At what CAGR is the Ferric Oxide Market predicted to grow during the forecast period?

What is the forecast period of Ferric Oxide Market research report?

The forecast period for Ferric Oxide Market research report is 2020-2030.

Who are the key players in the Ferric Oxide Market?

What are the key factors driving the Ferric Oxide Market

The growing demands for adopting steel in all major areas of applications.

Which region will lead the global Ferric Oxide Market?