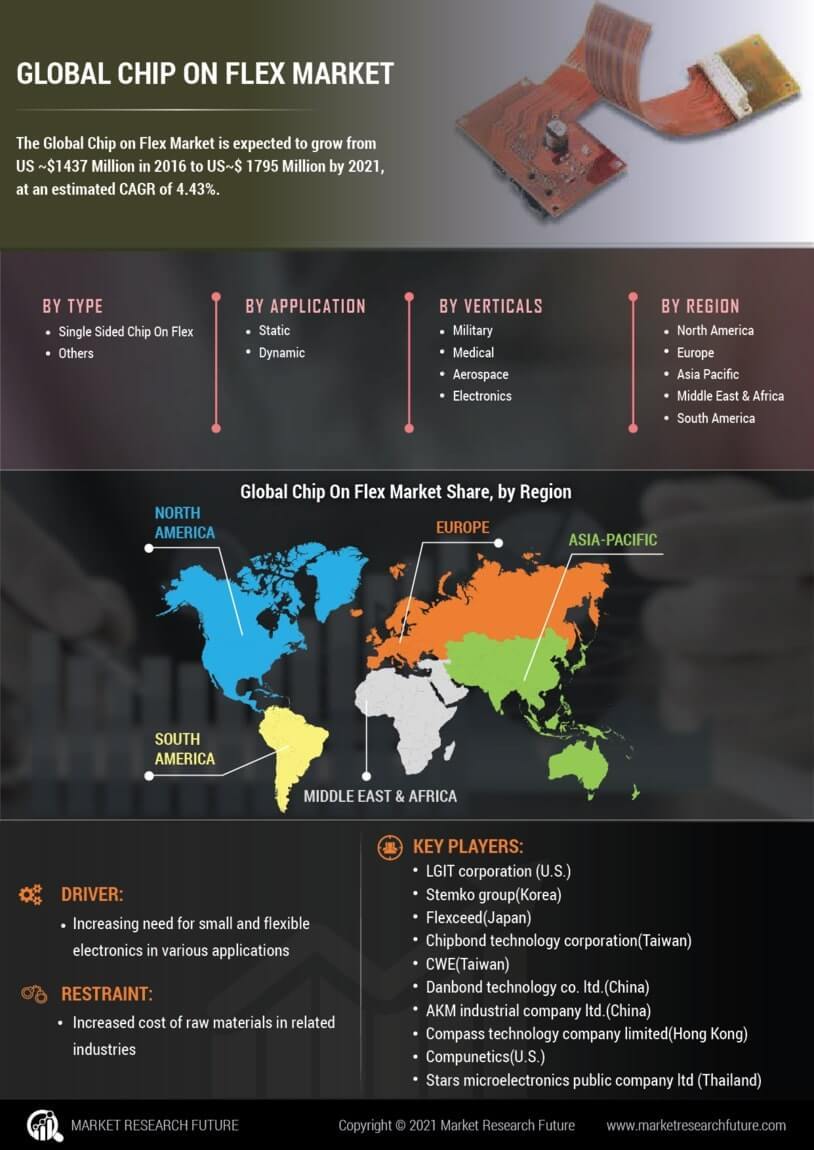 Chip-on-Flex refers to the semiconductor assembly technology wherein the microchip or die is directly mounted on and electrically connected to a flexible circuit which is a circuit built on a flexible substrate instead of the usual printed circuit board. The shorter interconnection paths on chip on flex simplifies the process of designing and manufacturing the product and improving its performance.  Chip on flex has some important features such as heat sinks, component assembly, penalization, shielding, over molding and graphic overlay among others which makes it more acceptable among end users such as electronic industry, aerospace, defense and others. The major drivers for the growth of this market are increasing need for small and flexible electronics in various applications such as displays, sensors, lighting, biomedical implants, and radio frequency identification among others and the rapid technological advancements which lead to accurate designs and automated production, of flex circuits that helps to eliminate human errors once involved in hand-built wire harnesses. With the use of these flexible circuit board companies ensure the 100% efficiency in the products, due to which level of fault ratio is drastically reduced. Flex chips help in reducing the cost, improving operator ergonomics, amplified product quality and testing repeatability.

The Global Chip-on-Flex Market Size is expected to grow from US ~$1437 Million in 2016 to USD 1,868.63 Million by 2030, at an estimated CAGR of 3.7% . The Chip on Flex market growth can be constrained by the increased cost of raw materials in related industries like the electronic industry along with the wide variety of technology used and the consumer needs changing to efficient, cheaper and powerful consumer electronics and mobile technologies.

The regional analysis of chip on flex market is being studied for areas such as Asia pacific, North America, Europe and rest of the world. Asia pacific is expected to record highest growth rate owing to existence of large number of chip on flex manufacturers in china like Danbond Technology, AKM Industrial, Compass Technology Company and others.  Asia pacific will be followed by North America owing to increased adoption of new technologies especially in automobile sector.  American depository of shares is also helping in mergers of various organizations to enhance the production capabilities in chip on flex market.  Many well established firms such as AKM Industrial, Compunetics and others are increasing their sales area in the Europe region which will lead to the growth of Europe region in chip on flex market.

At what CAGR the global market for Global Chip on flex is expected to rise in the future?

A CAGR of 3.7% has been calculated for the Global Chip on flex’s growth in the future.

Which region has been regarded as the most significant recording highest Global Chip on flex market share?

Europe has been regarded as the most significant region for market share and is growing with a market share of USD 1,868.63 Million by 2030.

How has the global Chip on flex market maintained its growth graph currently?

The activities such as joint ventures, mergers and acquisitions, new product developments, and research and developments has helped global Chip on flex market maintained its growth graph.

Which top names of key players have been included in the analysis of Global Chip on flex market?

What are the segments mentioned in the market for Global Chip on flex market?

The segments such as types, applications and verticals are mentioned in the market study for Global Chip on flex.