Cassava Market Research Report: Information by Category (Conventional, and Organic), Form (Solid and Liquid), Application (Food & Beverages, Animal Feed, and Others), and Region (North America, Europe, Asia-Pacific, and the Rest of the World) —Forecast till 2030 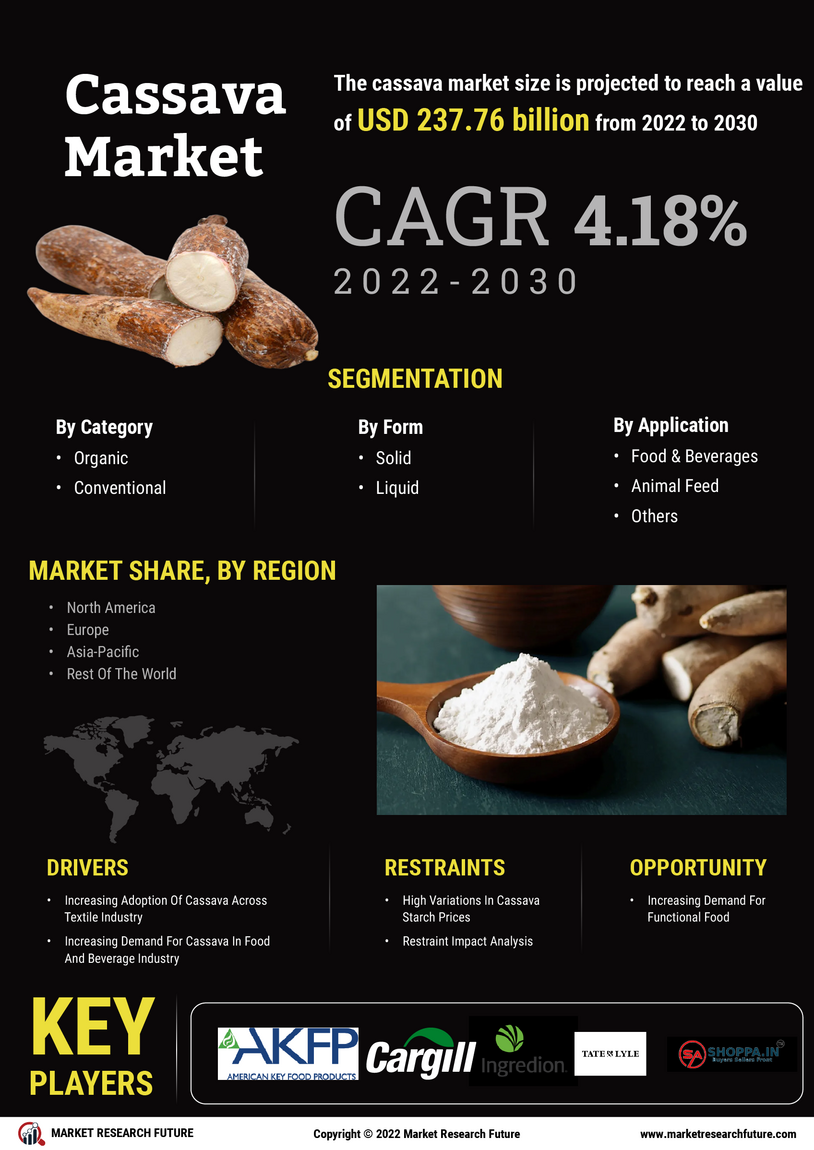 Cassava market size is anticipated to reach USD 237.76 billion by 2030, registering a CAGR of 4.18% during 2022-2030.Cassava flour is a traditional product that is made from cassava root. Cassava is one of the most important crops produced in the tropical regions after rice and maize. Cassava is grown in more than 90 countries due to it has a good source of carbohydrates. It is easy to produce in adverse conditions than other crops. Most of the people in Africa, Asia, and Latin America depend on this because it is a great source of income for farmers as well as food. Cassava is consumed directly by the people, and some of it is processed as flour, starch, chips, and pellets. Processing cassava is great because it removes toxins, reduces weight, and increases value.

Cassava has so many applications, such as food, textiles, glue, cardboard, ethanol, and paper. The publisher expects that the global cassava market will increase more in five years. The food industry is responsible for half of the global cassava that is followed by the feed Industry. Increasing demand for feed Industry and cassava flour is fueling the growth of the cassava flour sprouts market. Cassava is used in the household as well as Industries because of its high nutritional value. Increasing demand for bakery, snacks among the people is boosting cassava market growth.

This report highlights the cassava market expected growth of 4.18%, with a market value of $237.76 Billion in the forecast period. Cassava plays a huge part in the biofuel, animal feed, laundry Industry that is increasing the cassava industry growth. In tropical regions, cassava is cultivated as an annual crop, and it is the third-highest source of carbohydrates in the tropical region. In agriculture, cassava plays a very important role. It is used to feed the animals, beverages, dairy, and frozen desserts, snacks, and other food items. It is used to make ethyl alcohol that is used in many industries. Cassava is high source of vitamin-C, manganese, niacin, folate.

Due to the covid-19 pandemic, the cassava market was at a halt due to many factors. The global economy was down due to the covid-19 impact, and countries all over the world went through a lockdown situation. Due to the lockdown, the production was very low. Due to the low production of cassava, it couldn't fulfill the market demand. As people have mostly stayed home, the consumption of cassava is also reduced. There was not too much damage faced by the market but the global demand for cassava reduced. After the covid-19 situation, the market is expected to grow with increasing demand as per the market analysis.

Cassava is a rich source of carbohydrates that is why it is one of the major ingredients in a number of food items. The global food industry is growing due to population, urbanization, and rising economy, and with it, the demand to eat good food products has also increased, and it is driving cassava market size. Before, the use of cassava was only limited to food items, but due to easy availability, it is used in various non-food sectors such as papers, pharmaceuticals, and other sectors. The wide application of cassava is driving the growth of the cassava Industry. In the textile industry, cassava is used for printing, sizing, finishing due to its flexibility and ability to form a bond with the fiber. Cassava scratch is a heavily used finishing as it covers blemishes to provide a finishing look to the product. The growth of the textile industry is a major reason behind in cassava market growth. With growing cases of diabetes, people are health conscious, and people have adopted natural sweeteners, and due to this cassava market will grow more in coming years.

Opportunities for the market

In the global sector market for cassava flour is increasing due to the demand for bakery products because it has less gluten. As the demand for processed food increasing worldwide, there are more numbers of new food Industries are focusing on producing gluten-free products. These food factories are using cassava flour as a replacement for gluten in their food to fulfill the need for the health-conscious consumer. Cassava is high in carbohydrates, and it is an important source of energy, and it brings new opportunities for the global demand for the cassava market.

Just like other markets, the cassava market also faces many challenges. It is a big challenge to make it available in all the regions in the world. Due to the taste difference, people don't prefer to try it, so make them convince to taste is one of the major challenges for the market. There are other cheaper alternatives available in the market, so it becomes a challenge for the market to attract customers at times.

The demand for cassava is increasing, and the major drivers are driving the market growth; even though there are some challenges, and restraints the cassava market is all set to grow in coming years with the help of the key players. According to world cassava production statistics, the cassava market is expected to grow $237.76 Billion with a CAGR rate of 4.18% in the forecast period.

The category segment of the cassava market is divided into organic and conventional.

Form segment of the market is further divided into dry and liquid.

The application segment is the areas in which cassava is applied.

The Application segment of the cassava market includes bakery & confectionery, beverages, dairy and frozen desserts, sweet and savory, animal feed, and others.

The region segment of the market includes regions such as North America that have the US, Canada, and Mexico, Europe that includes Germany, Italy, Spain, UK, and France, the Asia Pacific that includes Japan, China, India, Australia, and New Zealand.

The major regions of the cassava market are North y, Asia Pacific, Europe, and the rest of the world. The Asia Pacific is the leading region of the market with Japan, China,

The Asia Pacific region is expected to dominate the cassava industry during the forecast period. Increasing demand for cassava products and byproducts made from cassava boosting the demand for cassava in the region. Cassava is widely used in the industries and the household as well. The production of cassava is very high in this region, and it is driving the market growth in this region. Due to the high consumption of snacks and baked products, the Europe region registers a high CAGR during the forecast period. The varieties of cassava products by the key players boosting the growth of the cassava flour thrive market. The market in the North American region is also growing at a rapid rate due to the increasing demand for gluten-free products.

The major key players of the market are.

These are some of the major key players who are driving the growth of the market, and among key players, Archer Daniels Midland Company (US), Agrideco Vietnam Co., Ltd. (Vietnam), American Key Food Products Inc. (US), Psaltry International Limited (Nigeria), Dadtco Philafrica B.V. (Netherlands), Roquette Frères (France), Woodland Foods (US), Mhogo Foods Ltd. (Kenya), Otto's Naturals (New Jersey) the Woodland Foods (US) is contributing the most in the market.

Many regions are building food factories to meet the market demand for cassava.

What would be the cassava market CAGR during the forecast period (2022-2030)?

What would be the cassava market valuation by 2030?

What are the key players in the cassava market?

Which region would dominate the cassava market?

The Asia Pacific cassava market would dominate the global market.

Which region would attain the fastest CAGR during the forecast period for the cassava market?

The European cassava market would record the fastest CAGR.

What are the categories recorded in the cassava market report?

Organic and conventional are categories included in the cassava market report.