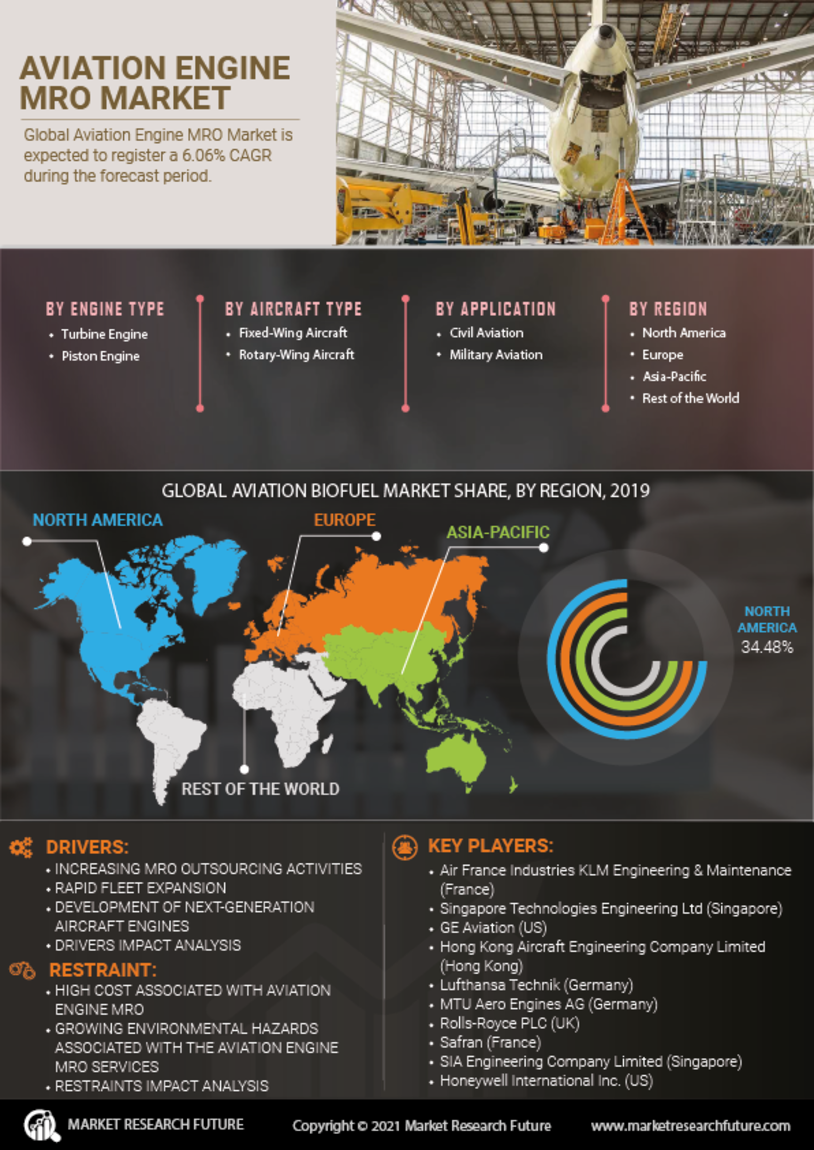 Aviation Engine MRO Market is projected to grow USD 26.52 Billion at a CAGR 6.06% by during the forecast period.

Moreover, the use of the new ultra-high bypass ratio (UHBR) turbofan engines in aircraft has also prompted the need for redesigning and improving the systems and equipment around the engine. Therefore, with the redesigning of aircraft engines and engine-related components, the requirement for advanced facilities and skilled workforce for its MRO will also grow.

The aviation engine MRO market has been segmented, by region, into North America, Europe, Asia-Pacific, and the rest of the world.

North America accounted for the largest market share in 2019 and is expected to be the largest market for aviation engine MROs during the forecast period. The regional market growth is primarily driven by the high demand for services from the players based in the US and Canada. It is projected that approximately 10,000 aircraft would be operational in the region by 2035, which is expected to create additional opportunities for the market players operating in the North America aviation engine MRO market. Moreover, the rising revenues of airlines headquartered in the region are also projected to support the growth of the market. As per the International Air Transport Association (IATA), North American carriers were expected to generate USD 16.6 billion in net profits in 2019 as compared to USD 14.7 billion in 2018. However, the ongoing COVID-19 pandemic is expected to hamper the growth of the regional market. According to IATA, owing to travel restrictions and global economic recession due to the COVID-19 pandemic, the air transport revenue in North America is expected to fall by USD 50 million in 2020. Hence, the aviation engine market in North America is expected to register a 6.18% CAGR during the forecast period.

What is the estimated growth rate of the global aviation engine MRO market?

Global aviation engine MRO market is projected to register a moderate 6.06% CAGR in the forecast period.

The increasing MRO outsourcing activities and rapid fleet expansion are the primary growth inducer of the market.

Which engine type is touted to witness the highest growth?

The turbine engine segment is expected to observe substantial demand over the review period.

Which region is expected to observe the highest growth?

The APAC is poised to secure the highest CAGR.

What is the application of the global aviation engine MRO market expected to witness the highest growth?

The civil aviation segment is slated to mature as the fastest-growing segment.

Who are the significant players operative in the global aviation engine MRO market?