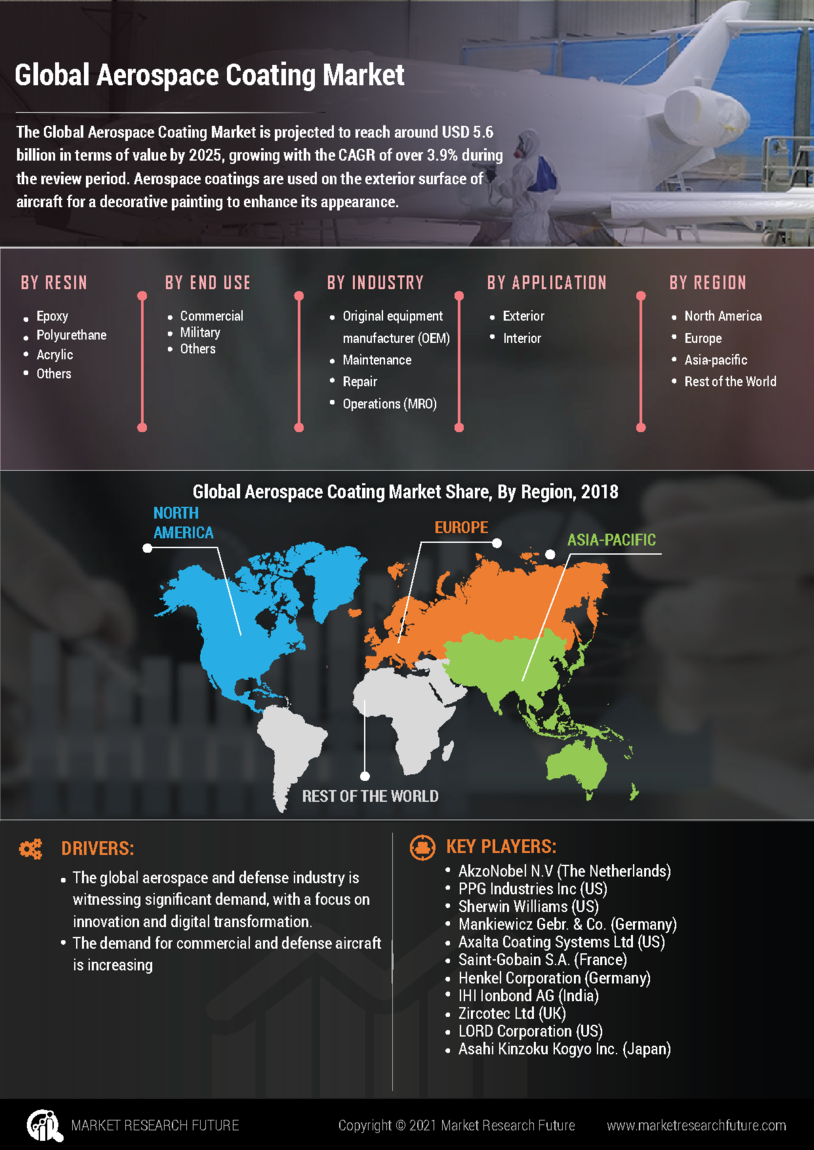 The aerospace coating market is projected to reach USD 30.20 billion by 2027; it is expected to grow at a CAGR of 6.7% from 2021 to 2027.Airplane manufacturers coat the outside of their planes with aerospace coatings. The effect is twofold. The first is that it makes the airplanes look nicer by giving them a shiny and glossy sheen. The other is that it protects the metal on the airplanes from wear and tear.

Aerospace coatings also protect the planes from the harsh realities of mother nature and the weather. These coatings help make it easier for the planes to repel dirt. Dirt can eat into the aluminum of the planes if it accumulates in excess.

COVID-19 is projected to push the world into the digital era. COVID-19 encouraged new methods of social interaction like social distancing and contactless delivery. It also encouraged governments around the world to impose quarantines and lockdowns. These had a limited effect so they were temporary.

Many companies in many markets suffered because they were either forced to dramatically scale back production or shut down temporarily. The companies in the aerospace coatings market were no exception. People flew around far less because of COVID-19 and because of the mask-wearing mandates that airlines imposed upon passengers. The demand for new planes dropped and many aerospace coatings manufacturers were forced to either dramatically scale back production or shut down either temporarily or permanently.

People are starting to fly much more often now that there is a vaccine that is readily available and airline imposed mask-wearing mandates are starting to be lifted. This is creating more of a demand for airplanes. Many airline manufacturers are responding by manufacturing more planes. This is driving growth in the aerospace coatings market.

Air travel is picking up in the Asia-Pacific region, especially. There is an increasing prevalence of low-cost carriers (LCC) here. Well, LCCs are also becoming more popular in other regions of the world. The Middle Eastern and South American nations are also expected to see an increase in LCCs.

Regions that have a large concentration of LCCs are starting to see much more air traffic in recent months. That’s why carriers like Emirates, Qatar, and Etihad have come to dominate the Middle Eastern aviation scene. They also fly to the European Union and the Asia-Pacific region.

The short flights market in the Asia-Pacific region is also a key driver of growth in the aerospace coatings market. That said, single-aisle planes like those that Boeing and Airbus use is projected to have the highest CAGR.

The middle classes in developing nations are growing exponentially. This is creating an increase in demand for people who want to fly internationally. These travelers are finding that they can travel to many more locations than they could in the pre-pandemic world. These people value cost and short distances over the more expensive and lengthy routes that traditional carriers tend to offer.

That’s why they are choosing to travel on lightweight planes that are more efficient more often.

The aerospace coatings market is facing some factors that are holding back growth. One is the fact that key Western nations aren’t spending as much on defense as they used to. What spurred this is partly budgetary problems. However, the main culprit was the fact that Afghanistan has fallen to the Taliban and Iraq no longer needs as much of a Western military presence.

Many developing nations, however, are spending more on defense. These include nations like China, India, the nations in the Middle East (UAE), Japan, Russia, and Brazil. There are two reasons why these nations are spending slightly more on defense. The first is that they want to bring their military aircraft fleet up-to-date. The second is that they want to do a better job of protecting their borders. However, the increase in spending from these nations is not enough to offset the major decline in spending from the huge Western powers. That’s why the aerospace coatings market is not growing as fast as it could and should be!

Raw materials costs are currently fluctuating widely. This can push the cost of the raw materials needed to make aerospace coatings up dramatically. The result is that airplane manufacturers have to use more expensive products which means that they have to produce fewer planes. The aerospace coatings industry has to find ways to keep its products in the affordable range even with wild fluctuations in the price of raw materials.

Axalta Coating Systems is a key player in the aerospace coatings market. It has managed to become one of the leaders in this industry by investing heavily in research and development. This has allowed it to come up with newer products with more innovative applications. One such product is the Dura Coat product. It applies a shiny coat to metals and makes them look prettier and more attractive!

The aerospace coatings market can be grouped into the following sub-groups based on resin:

The epoxy sub-segment has the highest CAGR in the resin segment.

The aerospace coatings market can be grouped into the following sub-segments based on end-use:

There are five key regions in the aerospace coatings market:


The North American region is expected to dominate both in terms of regional CAGR and market share. The reason for this is that the United States produces and exports the largest number of aircraft in the world. According to the FAA, air traffic in America is expected to increase by 1.9% a year until 2038.

This has resulted in the increase of many international and domestic flights which require the usage of more planes. Hence the demand for aerospace coatings has taken off.

The Asia-Pacific region is expected to have a CAGR of 4.8%.

The Middle East and North Africa and Latin American regions are seeing respectable growth largely because of the fact that their governments are investing intensively in the aerospace industry and because there is more tourism to these areas.

The aerospace coatings market is highly competitive. This is because the market is fairly lucrative and growing at a steady pace and because there are few barriers to entry. Companies find that they must invest heavily in research and development, merge with and acquire other successful companies, and enter into strategic partnerships with other successful companies if they want to generate enough of a profit to remain financially healthy and viable!

Axalta Coating Systems Inc is a major American company. It has managed to remain competitive and improve its market position by investing heavily in research and development. This has allowed it to develop a new generation of products with more innovative applications and uses.

What is the valuation of the aerospace coatings market?

The global aerospace coatings market is expected to reach a valuation of USD 30.20 billion by 2027

What is the key players of the aerospace coatings market?

What is the major product type in the aerospace coatings market?

Epoxy coatings are the dominant product type in the global aerospace coatings market.

What is the major end use of aerospace coatings?

What are the leading players in the global aerospace coatings market?