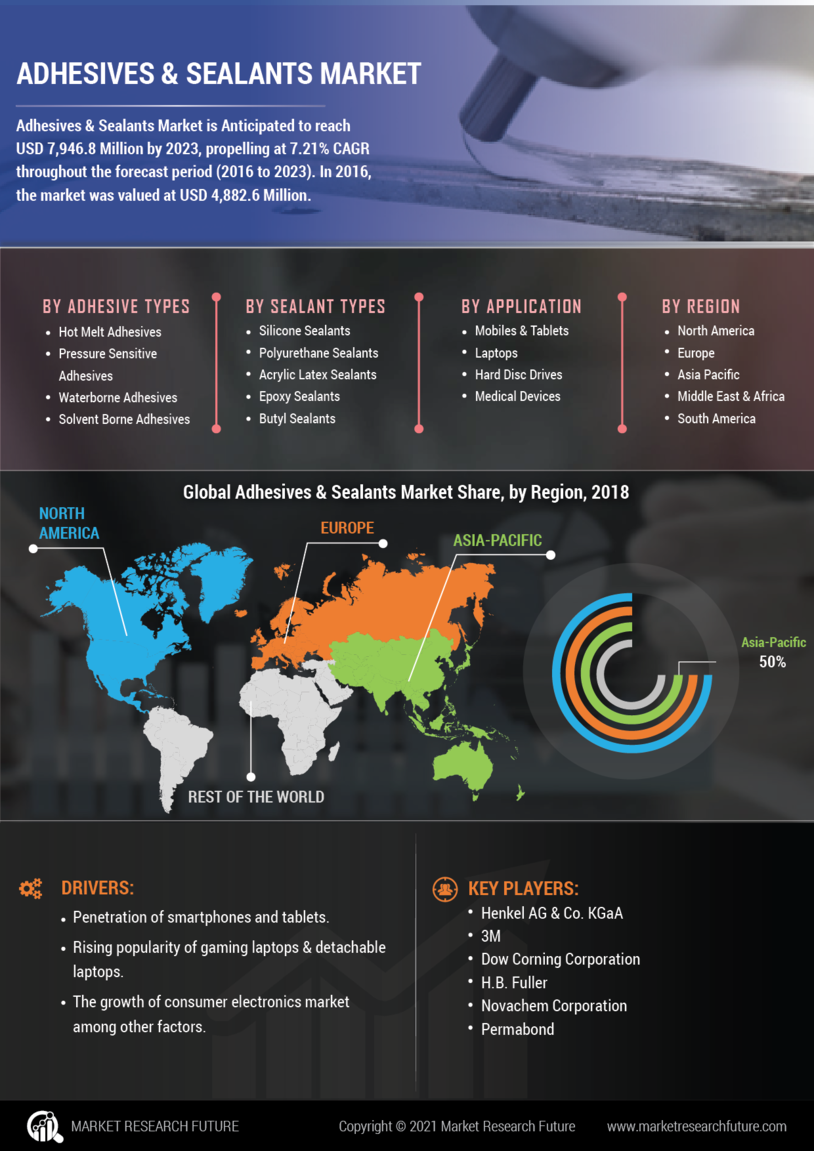 Adhesive and Sealant for the Handheld Devices Market valued at USD 4,882.6 million in 2016, the market is expected to touch a value of USD 7946.8 million by the end of 2023. Also, the adhesive and sealant market for handheld devices is expected to witness a CAGR of 7.21%. The materials applied between the two surfaces to hold them together are referred to as adhesives or sealants. Manufacturers of these devices are coming out with innovative technologies to meet the ever-changing need for sophisticated communication devices and gadgets from tech-savvy consumers. As a result of the rapidly changing technological aspects in telecommunication and wireless communications devices, the miniaturization of electronic components and the adoption of non-traditional materials for the construction of electronic components to be used in handheld devices have occurred. As a result, the demand for novel bonding agents that fit the material chemistry of the components used in portable devices has increased.

The COVID-19 pandemic has caused unprecedented lockdowns ly, crumpling daily operations and transforming consumer behaviors in almost every industry. Because of the recurrence of COVID cases in numerous locations, the market is developing slowly. The sporadic continuation of lockdowns in some places creates barriers to market development by adversely affecting resources such as labor and supply networks. Operating procedures in the  market have become more diverse as innovative models for operation and delivery have emerged. The emphasis on accumulating resources to deal with unforeseen scenarios affected future market trends. Market developments and research are expected to generate exciting growth opportunities in the next years. The reliance on online commerce for sales is expected to increase significantly throughout the projected period, prompting market stakeholders to invest more in its growth.

The adhesives and sealants for handheld devices market size is growing quickly due to increasing market impetus factors and trends fostering the growth of the  adhesives & sealants market for handheld devices, including, among other things, increasing smartphone and tablet penetration, the rising popularity of gaming laptops & detachable laptops, and the growth of the consumer electronics market. Furthermore, patterns such as expanding electronic gadget gathering centers in Southeast Asian nations and essential FDI in the ASEAN region from developed countries, among others, are expected to provide profitable opportunities for the industry.


Surface mounting, assembling substrates on PCBs and semiconductors, potting & encapsulation, and manufacturing & assembly of electronic circuits and goods are all applications for electronic adhesives. The growing need for miniaturization/automation of mobile devices, touch screens & displays, and electronic medical systems is propelling the industry forward. Because of the increased demand for these items, the consumption of adhesives and sealants for portable devices has increased.


The electronics markets have been established in developed nations such as the United States, Canada, Germany, the United Kingdom, and France. These mature electronic adhesive markets have nearly exhausted additional expansion opportunities, resulting in lower growth prospects. As a result, demand for electronic chemicals and materials has gradually shifted from North America and Europe to the Asia Pacific region. One of the primary reasons for this movement is that the Asia Pacific region is seen as a rising market for electronic chemicals and materials due to various developing countries such as China and India. Another key factor driving the migration is the region's low-cost manufacturing. Europe's ongoing loss of dominance is triggering a market shift toward the Asia-Pacific, as HenkelAG & Co. KgaA (Germany), The 3M Company (US), and others are expanding and catering to increased demand in Asia Pacific's emerging countries. Due to the high price ranges for adhesives and sealants for portable devices, the steady relocation of production plants and raw material suppliers to the Asia-Pacific has boosted imports of adhesive materials from the region.


With continuous technological developments and innovation in the North American electronic assembly business, electronic adhesives have garnered a larger preference over lead solders in the area. In terms of consumer electronics usage, this area reigns supreme. North America has the most electronic, chemical and material industries that are always working to incorporate newer versions of the technology. Dow Chemical Company (US) has dominated the adhesives and sealants for the portable devices industry due to its unrivaled product quality. The players' constant innovations, R&D efforts, and development strategies, such as The 3M Company (US) and H.B. Fuller (US), present an opportunity to advance eco-friendly, non-toxic electronic adhesives for electronics and semiconductor applications.

The  adhesives and sealants for handheld devices market segmentation, based on sealants type, is acrylic latex sealants, silicone sealants, epoxy sealants, polyurethane sealants, butyl sealants. In 2021, the silicone sealants segment dominates the market with the largest market share. The consumer electronics sector largely drives silicone sealants to need improved sealants due to superior features such as strong temperature resistance, low volatility, and mechanical strength, among others. 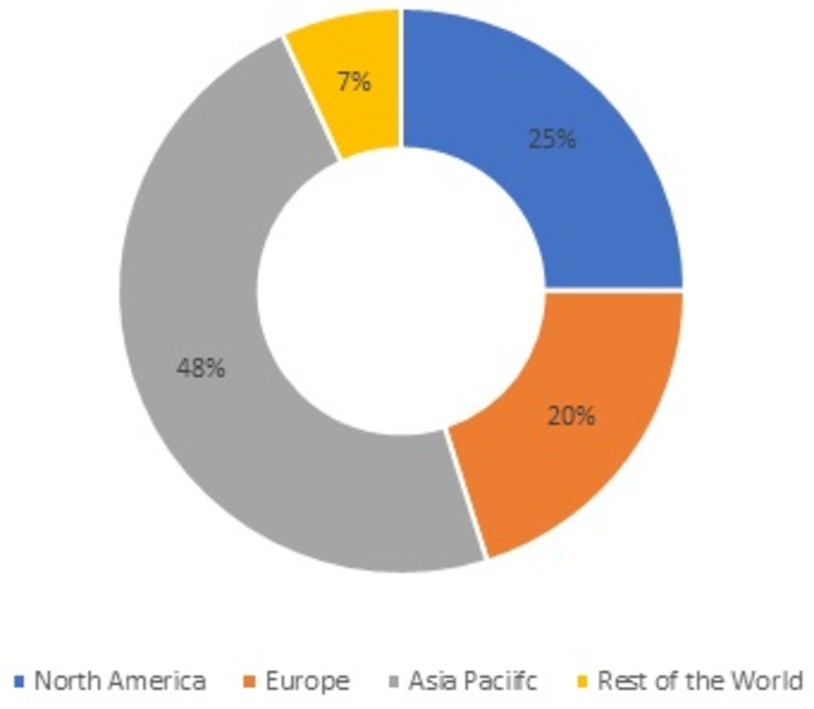 Adhesives and Sealants for Handheld Devices Market Overview, by Region

By region, the  adhesives and sealants for handheld devices market report have been divided into North America, Europe, Asia-Pacific, and the Rest of the World. Asia-Pacific accounted for the most extensive market share and is projected to exhibit the highest CAGR during the review period.

The European region has the second largest market share for adhesives and sealants for handheld devices, mostly due to the prominent producers in the region with significant product contributions. With around 18,000 domestic electronics firms, the United Kingdom is Europe's largest market for high-end consumer electronics items. In recent years, there has been an increase in demand for technologically sophisticated touch-screen gadgets and wearables. Adhesives, particularly epoxy-based adhesives, play an important role in the production of electrical goods. Major key players in the market are also present in the region. All of these factors are expected to increase demand for adhesives and sealants in the region, consequently fueling the expansion of its adhesives and sealants for the handheld devices market.

The market includes tier-1, tier-2, and local players. The tier-1 and tier-2 players have  reach with diverse product portfolios. Due to product differentiation, companies such as Endoca BV, Cannoid, LLC, Medical Marijuana, Inc., FOLIUM BIOSCIENCES, and Elixinol dominate the adhesives and sealants for handheld devices market, financial stability, strategic developments, and diversified regional presence. The players are concentrating on supporting research and development. Furthermore, they embrace strategic growth initiatives, such as development, product introduction, joint ventures, and partnerships, to strengthen their market position and capture an extensive customer base. For instance, in March 2022, Elcam Drug Delivery Devices (E3D) declared it is developing on-body delivery devices for subcutaneous bolus inoculations of drugs outside a clinical setting. The On-body Bolus Injector (OBI) platform from E3D is designed to give subcutaneous dosages of pharmaceuticals during a pre-determined injection interval in a profitable and less invasive manner. The intervention may be affixed to the body with an adhesive pad built-in.

Scope of the  Adhesives and Sealants for Handheld Devices Market Report

To identify and infer the drivers, restraints, opportunities, and challenges for the  adhesives and sealants for handheld devices market

To provide a detailed insight into the major companies operating in the market. The profiling will include the financial health of the company past 2-3 years with segmental and regional revenue breakup, product offering, recent developments, SWOT analysis, and key strategies.

At what CAGR is the Adhesives & Sealants for the Handheld Devices Market predicted to grow during the forecast period?

Adhesives & Sealants for the Handheld Devices Market is predicted to grow at 7.21 % through forecast period of 2016-2023.

What is the forecast period of Adhesives & Sealants for the Handheld Devices Market research report?

The forecast period for Adhesives & Sealants for the Handheld Devices Market research report is 2016-2023.

Which region will lead the Adhesives & Sealants for the Handheld Devices Market?

Adhesives & Sealants for the Handheld Devices Market is dominated by APAC region.

Who are the key players in the Adhesives & Sealants for the Handheld Devices Market?