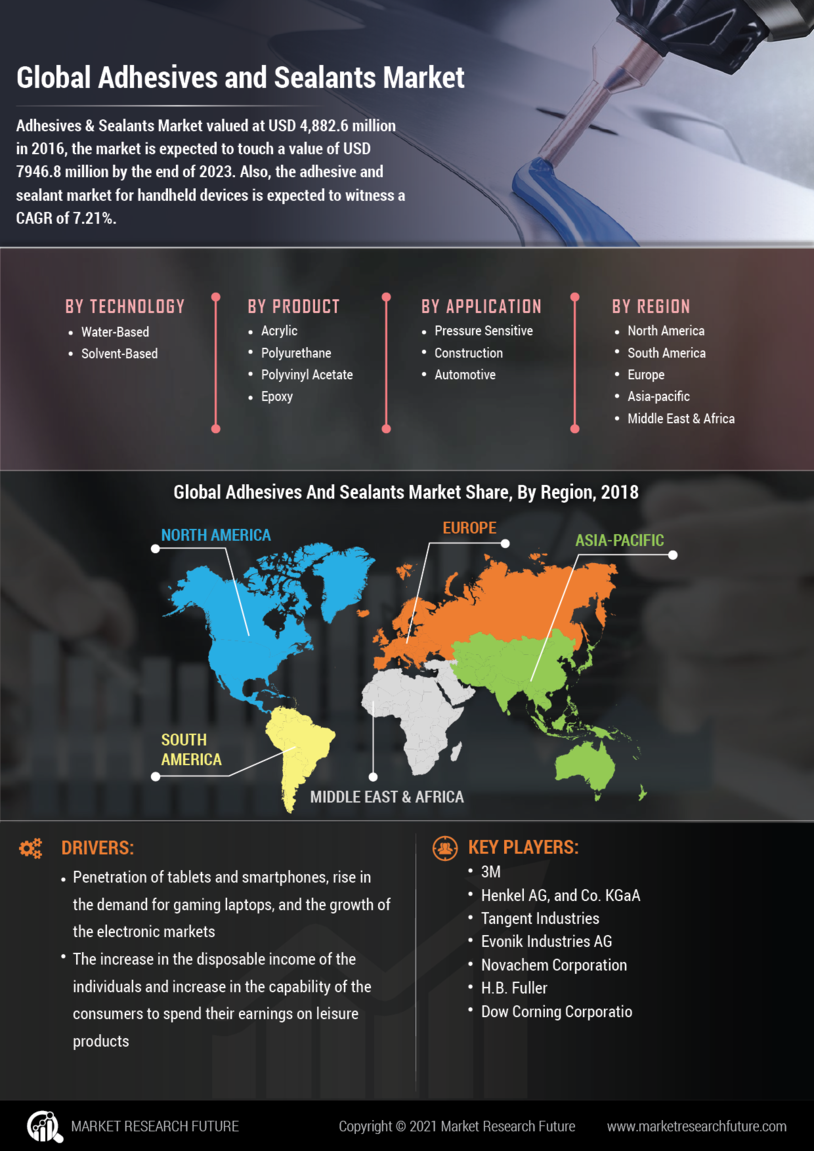 The materials applied between the two surfaces to hold them together are referred to as adhesives or sealants. To be more precise, adhesives ensure that the surfaces get attached permanently, whereas the sealants take care of the gaps between them after applying the adhesives. Adhesives & sealants market uses are primarily in end-use industries like mobile phones, hard disc drives, laptops, etc. It has been estimated that the adhesives & sealants market would grow at a progressive rate in the forecast period. The primary role of the sealant is to make sure that no foreign particles get between the two surfaces that have been fixed in place by the adhesives. Adhesives have widespread use in manufacturing products like camera lenses, PCB, Connectors, and many more. The commonly used adhesive is the hot melt adhesive with better rework ability and dependability properties. Silicones and urethane are the most commonly used sealants.

COVID-19 Analysis:The COVID-19 era would be referred to as one of the deadliest times, not just for a nation or two but for the entire world. People are losing their loved ones, losing their jobs, and most of all, losing their mental peace. The reports that have been prepared by the industry experts and the analysts with decades of experience are the ones that would help the business and the organization back on track. The detailed adhesives & sealants market analysis starting from the historical background to the current adhesives & sealants market uses are discussed in the reports. The qualitative and quantitative aspects have also been included to enable the business owners and the employees to take a deeper look at what needs to be done to combat the losses and move further. The strategies planned and implemented by the key players in the market are also discussed to make the organizations realize the right and wrong steps and make wise decisions.

All these top players in the market have been planning and implementing the strategies so that benefits add to the organization's growth and the entire market. The acquisitions, collaborations, and mergers among the top players of the market have made the industry a successful one. All of them have been taking steps forward in new and technologically advanced innovations in the market to ensure that they get the most and the best out of everything manufactured and delivered to them. Market Dynamics:

Few significant factors govern the market dynamics of the market. These include the penetration of tablets and smartphones, rise in the demand for gaming laptops, and the growth of the electronic markets. Not to forget another significant factor that drives the market. The increase in the disposable income of the individuals and increase in the capability of the consumers to spend their earnings on leisure products has subsequently bought adhesives & sealants market growth. Let us understand him with an example. In developing countries like India, if people have increased and so have, they demand leisure products. The list of these leisure products includes smartphones and tablets in the priority. This, in turn, brings about a boom in the adhesives & sealants market trends.  Regulatory Implications:

Regulatory implications in the field of adhesive and sealant for the handheld devices market have not been stringent. Still, neither have the administrative bodies at the local, regional, and national level supported any of these, bypassing any laws or regulations. The support from the government certainly brings about a tremendous rise in the mar adhesives & sealants market. The growth in the market has undoubtedly been driven by factors like demand for electronic devices and then increase in the spending capacity of individuals. At the same time, quality checks on them have been regularly done by the regulatory bodies, which indeed ensures that the commitment on the quality is not lost whatsoever. This has been proved beneficial to the end-users because they can breathe a sigh of relief about the quality. Segmentation Overview:

The segmentation of the market is dependent based on the following subtypes:

Based on adhesive type:

Adhesives & sealants market by type can be further subdivided into the following categories:

Among all the sub-sections of the Adhesives & sealants market by type, hot melt adhesives dominate the market because of their characteristic properties, like high tensile strength and malleability. Based on sealant type:

Based on sealant type, the market is sub-categorized into the following:


Acrylic latex has been the top priority adhesive for the end-users from the subdivisions based on the type of the sealant.

Based on Adhesives & sealants market application, the market is further divided into the following subtypes:

Among all the sections in Adhesives & sealants market application, the mobile phones, tablets, and laptops have been the most popular among all sub-sections. These have bought about the revolution in the adhesive and sealant handheld devices industry. Regional Analysis

The market is divided into the following parts based on the regions:

The region that dominates the market in the Asia Pacific region. It accounts for almost 50% of the total market share. Some of the factors that have made the region possess such a high share in the market include emerging demands for electronics in the Asia Pacific countries. Not only this, but rapid urbanization in most countries in the region has also resulted in the adhesives & sealants market growth to a great extent.

The region that bags the second position in the market, based on the revenue share is Europe. It has increasing adhesives & sealants market trends because most of the major manufacturers are located in the region that offers high-quality products. The region that follows next is North America. Recent Developments:

Some of the recent developments in the Adhesives & Sealants Market for Handheld Devices are:

The global market for adhesives and sealants for handheld devices is expected to grow at a pretty considerable rate between the adhesives & sealants market forecast period. The report prepared gives a detailed adhesives & sealants market analysis, starting from the market overview to the study of the COVID-19 period. This provides the mentorship and an in-depth enclosure about the ways and strategies prepared by the industry experts. The reports also have the adhesive and sealant market dynamics for the handheld devices market, which informs the business owners about the major driving forces and the challenges being faced by the market. To add to the advantage of the companies, the segmentation of the market is provided along with the regional analysis. The list of the key players of the market is also included in the report, which lets the organizations self-analyze themselves about the areas of concern that the top players have been following religiously but lack to perform. Also, the list of all the markets is included in the report.

What is the growth rate of the adhesives and sealants market?

What are the leading players in the global adhesives and sealants market?

Which is the leading regional market for adhesives and sealants?

Asia Pacific holds the largest share in the global adhesives and sealants market due to the growing construction industry in the region.

What was the size of the adhesives and sealants market by 2030?

What are the major product types in the adhesives and sealants market?

Major product types in the global adhesives and sealants market include acrylic, polyurethane, polyvinyl acetate, epoxy, and others.

What are the major applications of adhesives and sealants?

Adhesives and Sealants Market Expected To Capitalize On the Abundance of Positive Growth Clues in...